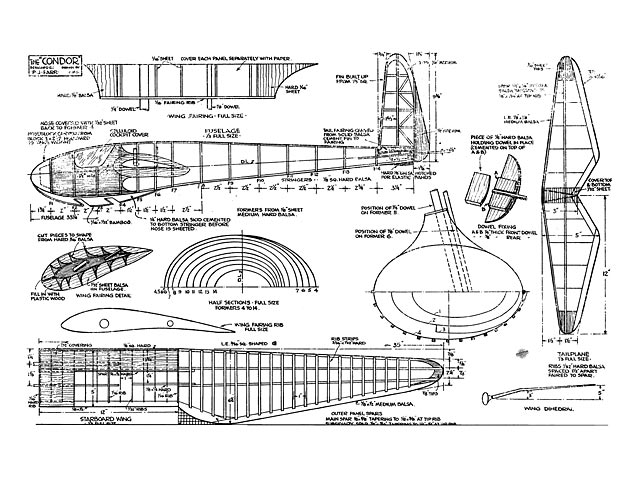 Quote: "Building Instructions. Fuselage. The formers are cut out of medium hard 1/8 sheet, in halves. These are not cemented together. The positions of the wing fixing dowels are marked on formers 5 and 6, and the dowels are cemented in place. The pieces of 1/8 and 1/4 sheet supporting these are then cemented on.

Build the fuselage by pinning the top and bottom stringers in place on the plan. (Note the tap and bottom stringers are slightly notched into the formers. The rest are not.) Cement the former-halves in place, and add the rest of the stringers, starting with the middle one which carries the tail unit. The cockpit is cut out after the fuselage is completed. The stringers should be steamed to shape before being cemented in place. Use plenty of cement.

When the half is dry, take up from plan and add the other half-formers and stringers as on other half. Cement the fairing ribs of 1/16 sheet in place on the dowels and build up the fairings as shown on the plan. The skid is cut from very hard 1/4 in sheet and glued to the bottom stringer. A strip of 1/16 x 3/32 bamboo is glued to the bottom of the skid. Cover the nose back to former 4 with medium hard 1/32 sheet and cut out cabin.

Carve a noseblock to the dimensions shown on the plan. This can be hollowed out to take lead weight. The original model was weighted with Plasticine inserted between the first and second formers.

Cover with super light bamboo tissue in strips. Water-spray and give it three coats of Cloudcraft petrol model dope (super strength). The original colour scheme was orange fuselage and fin, white wings and tail-plane. The sheeted part of the nose was painted two coats of matt black dope.

Wings. The inner sections are built in the normal way. Holes are cut in the ribs and tubes fitted to take the fixing dowels. The tubes should be made by bending medium hard 1/32 balsa round pieces of dowel and glueing them, care being taken not to glue the tube to the dowel. The dowels should be a good fit to the tubes. The inner three ribs should be slightly thinner all round to take sheeting. The spar projects If in. into the outer panel. The outer panels have built-up ribs. Cut the spars as shown on the plan from hard in. sheet. The rib-straps are 3/16 x 1/32 HARD balsa.

Pin these strips in place on the plan, being careful to pack up the leading edge to the correct height. Cement the leading and trailing edges and the spars on to these strips. Then add the top strips. The ribs will hold their shape better if the strips are steamed or sprayed with water and bent to shape before fitting. The tips are bard in, sheet. Join the inner and outer panels by packing up to the correct dihedral with books. Cement the spars to the protruding parts of the inner section spars. Sheet the inner sections with 1/32 balsa as shown on plan. The wings of the original were covered with white super light Jap tissue and given two coats of Cloud petrol model dope after spraying, It would probably be better, however, to cover them with super light bamboo tissue and give two coats of dope.

Flying. The finished model is very light: the original weighed approximately 9-1/2 oz ready to fly. The wing loading works out at 4 oz per square foot.

The back hook can be used safely in all but the highest winds. The original model has been flown very successfully on a 300 ft towline, the average for ten consecutive flights on four separate days being just over three minutes. The best times to date are 5 min 18 sec, and 13 min 56 sec.

It is my belief that as much fun can be had with a fairly good glider and a 300 ft. to 400 ft. towline as with all the rubber jobs in the world - so here's luck."

Note this is not a full size plan. Formers are shown at 100%, with general layout at 1/3 size. This is how the plan was originally published, across 2 pages of the Aeromodeller magazine, in 1942. 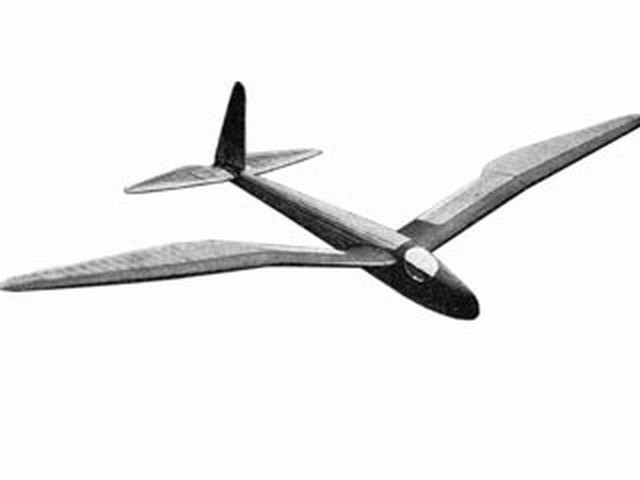