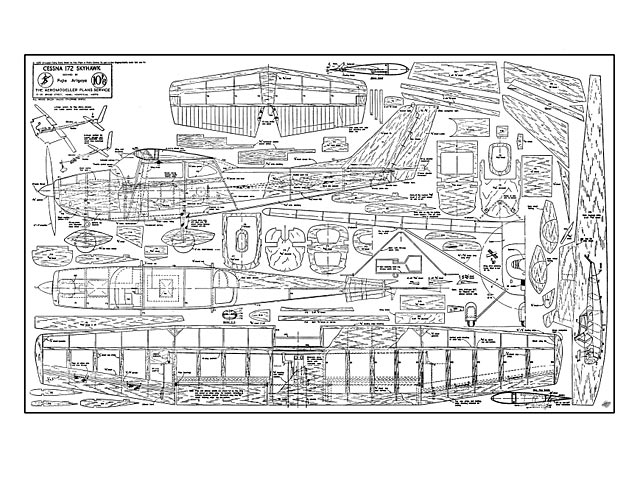 THIS is the 53rd of Japanese scale model specialist Fujio Arigaya's designs and from what we can interpret from photographs and sketches (the language still defeats us!) it is at least his third Cessna 172E!

Regular readers will remember his near-scale Junkers Ju87 Stuka (oz20) which has become a popular APS plan for single channel radio control. Now, in this Cessna we have something completely orthodox - suitable even for free flight and yet positively bold if the alternative controls are employed. Fujio's 46th model was a 172E Skyhawk with coupled aileron and flap control and 2.5 cc power. His next, the 47th, was another Skyhawk but using a 1.5 cc engine and just aileron control. The one we show here is basically for rudder control plus engine speed off a second escapement. The extras come with the use of Japanese dual purpose motorised single channel servos, of the KO Intermediate type. These have two output arms, working in sequence according to selection. Thus one can use the primary and secondary arms for Rudder or Aileron, and flaps, steering etc. Drawings on the plan show how various combinations have been used in Fujio's Skyhawks.

The model is to a size of convenience rather than a specific scale. It is near to one-ninth full size. This is to obtain ideal areas and weights without deviation from a scale outline. The wing area of two square feet is just right for the 1.5 to 2.5 cc throttle-controlled engines and average all up weight, complete with radio and ready to fly, ought to be about 2-1/2 lbs. Without the load of radio it would of course have a sprightly free flight performance on 1 cc.

Cessna Aircraft of Wichita, Kansas have supplied details of the 1966 model 'G' Skyhawk for those who want to be positively up to date and the 1966 machine is featured in colour on the cover. Note the pointed spinner and spats which are external distinctions. The 172 is a very popular 4 seater with luxury car comfort and very smooth flying characteristics. Many are used in Great Britain so that the scale enthusiast can easily search out one at a nearby airfield for those extra details. Colour trim varies accord-ing to year of manufacture and the application of National Markings. Another alternative scheme for those who like something 'different' would be that of the US Air Force who use some as trainers.

A great attraction of Fujio Arigaya's designs is his simple approach to structure, coupled with the facility of providing fullsize parts drawn out on the plan. This is a great help and we're sorry we don't seem to be able to offer this service more often.

The fuselage is sheet sided with 3/32 in sheet balsa planking for the underbelly and rear decking where curves are needed. A section around the detachable hatch for fuel bottle access is also planked and the remainder of the nose area is block balsa. Construction therefore starts with assembly of the cabin area formers between strengthener strips and the sheet sides, followed by other formers, engine mounts, undercarriage, nose blocks, planking and strengthening at the wing and tail seats. Note that the wing should be at plus 3 degrees on the chord line and the tail at 1 degree negative.

Leave the cockpit glazing until last and if you wish to make the tail plane a fixture as is suggested leave the rear decking planks until the tail has been fitted so that they will carry the lines smoothly to the rear. The tail should be next, having decided whether or not to use elevator action..." 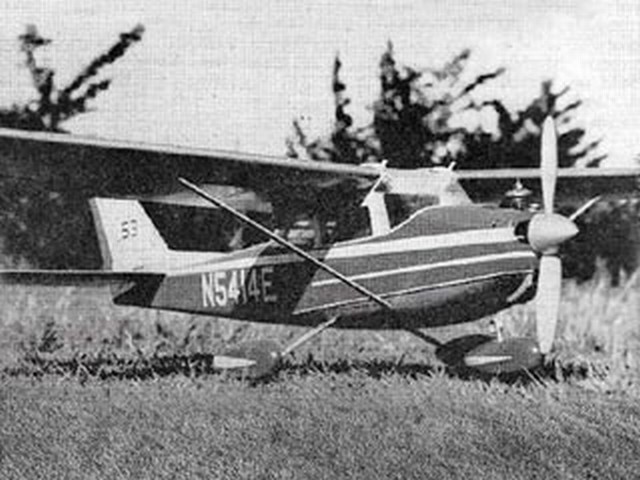