Quote: "CONTESTS are won through flying skill - knowing how to get the most out of your ship. 'Champmaker' is an instrument to develop this skill. Ultra-simple construction slashes time spent at the work bench to a minimum, and light-weight, sturdy structure cushions the frame-shattering effects of maladjustments.

The selection of a wing and tail section with perfectly straight undercamber permits rapid assembly directly on a flat surface, assuring warp-free surfaces, and eliminates the need to stick the covering to each rib. Easily installed false ribs maintain the camber of the leading edge and add an eye-pleasing detail.

Many V-tail designs have been unsuccessful due to failure to employ sufficient dihedral and area in the tail surfaces. An angle of 55 degrees on each panel was found necessary to produce proper stability.

In performance Champmaker matches its bigger contest brothers, turning in frequent still air flights of 2-1/2 minutes, enough to tax the bounds of the average small field with which most modelers have to content themselves.

To reduce the wide variety of material sizes often required, the entire airframe is designed of 1/8 sq stock and 1/16 sheet. The only exception is a strip of 1/8 x 3/8 triangular stock for the wing trailing edge. The plans are drawn actual size. Merely remove them from the magazine and scotch tape them to a smooth flat board. Tape a sheet of wax paper over the drawing to protect it from excess cement.

The fuselage sides are built together, one atop the other. Pin the longerons on the plan and fit the cross-pieces between them in pairs. Use plenty of cement on all joints. Remove the sides when dry and slip a razor blade between the strips to separate them. Pin the flat, cabin portion of the sides on the top view, and install the cross-pieces in this section. Check the structure carefully to be sure it is square.

When dry, pull the nose and tail ends together and fit the remaining cross-pieces. Build up the nose fairing of 1/16 sheet formers F-1, F-2, F-3. Add the windshield former F-6 between the upper longerons. Fit the dowel pin mounts, F-4, in the rear of the fuselage.

Form the landing gear of .040 piano wire to the full size pattern given. Cut out two landing gear clamping formers, F-5. Install the first former against the hack of the fourth upright. Attach the landing gear to it with several coats of cement. When dry, add the second former. Slip a pair of 1-1/4 in dia hardwood wheels on the gear and bend over the projecting ends of the axles.

The nose plug is carved of a single block of balsa 3/4 x 7/8 x 1 inch, with the grain running parallel to the 3/4 dimension. Make a cut with a coping saw 1/4 in from one end, about 3/16 deep on the sides and bottom, and 5/16 deep on the top. Split away the material, almost to the depth of these cuts, and fit the resulting plug snugly into the nose of the fuselage. Using knife and sandpaper shape the nosing to blend smoothly with the lines of the fuselage. Drill a 3/32 in hole through the nosing... " 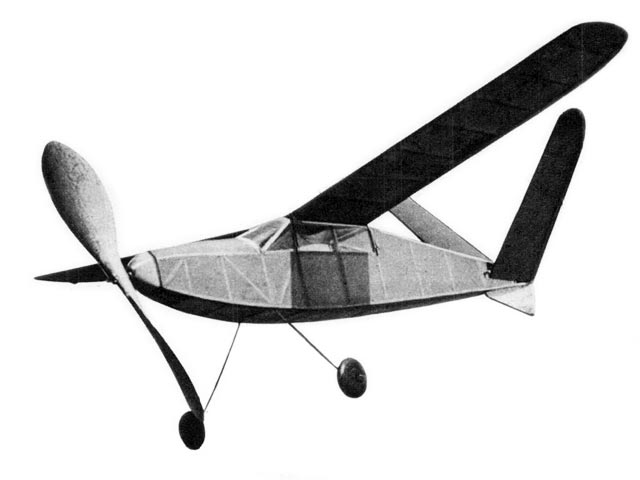