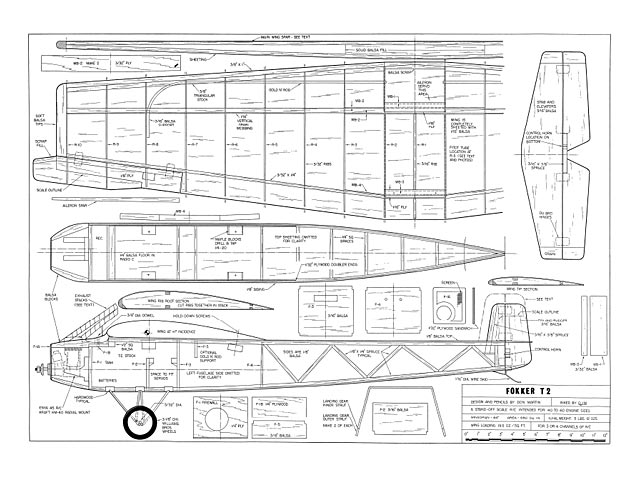 While looking for a radio control Stand-Off Scale project recently, I attempted to find something out of the ordinary that hadn't been modeled before. My interest was in aircraft involved in history making 'first' flights and to my surprise I found the choice in this category was narrowing down.

One airplane in this select group did stand out as being neglected by modelers, the Fokker T-2. This aircraft made the first successful non-stop flight across the United States on May 2, 1923. Powered by a 400 hp Liberty engine it lifted 10,695 pounds off the runway at Roosevelt Field, Long Island, NY and under the skillful guidance of Lieutenants John Macready and Oakley Kelly landed safely 26 hours and 50 minutes later at San Diego, California. Considering the lack of navigational aids and the relatively primitive aircraft and engines of the day, this was truly a remarkable accomplishment.

Why then should the Fokker T-2 with this outstanding contribution to Aviation history be neglected as a subject for modeling? Perhaps one contributing factor is its very boxy design with proportions not readily suitable to a stable flying model. I have to admit I passed it by at first for this very reason, and perhaps it was that same reason that made me reconsider. Certainly it would be a challenge, so I decided to give it a try.

It was quite obvious that some modifications would have to be made, but since this was to be a Stand-Off Scale, it seemed feasible that a presentable model could be constructed. My first source of reference was an article in National Aeronautics for Spring 1973 which contained a reduced copy of blueprints obtainable through the Smithsonian Institution. I send for the drawings and these plus a borrowed copy of 'Armchair Aviator' for July, 1973 featuring the T-2 story was all I needed to get started.

The size of the model was chosen to make use of an Enya .45 which had been sitting idle in the shop for some time. This gave me a fuselage large enough to contain most any size radio gear. Since I believe in making use of all equipment that is still in good working order I planned on utilizing an older Heath 3-channel receiver and some World Engines S4B servos. In fact, the transmitter for this rig is a Heath GD-47 modified for single stick and converted to 53.3 mHz.

The major changes incorporated in the final design include lengthening the nose moment, enlarging all tail surfaces and the ailerons as well as changing the contour of the cowling, to accommodate the Enya .45. All things considered the finished model measure up quite closely to my original expectations.

Construction. Let's start by building the wing spar. Yes, you read it correctly, the wing spar and if you will bear with me I think you will agree it is a simple way of building a wing. Trying to join two completed wing halves at the proper dihedral angle while fitting and gluing gussets plagued me from the beginning of my modeling career until I built my first gas model. The method used made wing construction so much easier I can't remember using any other method since then and the T-2 is no exception.

The entire main spar from tip to tip is made flat on the building board, complete with dihedral gussets before any other framework is added. This method will work with any type of dihedral and will present no problems even when using a wing jig. Since it is impractical due to limited space on the plans to show more than half the wing on a plane this size it will be necessary to draw out the other half of the spar. I usually keep a roll of shelving paper on hand for this purpose and it shouldn't take more than 15 or 20 minutes to layout a workable drawing..." 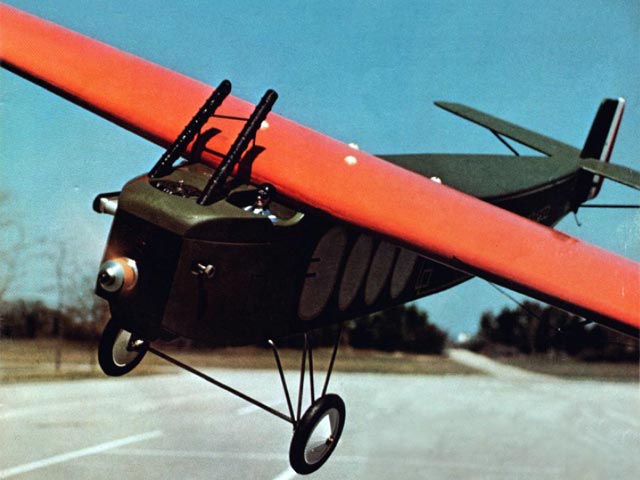