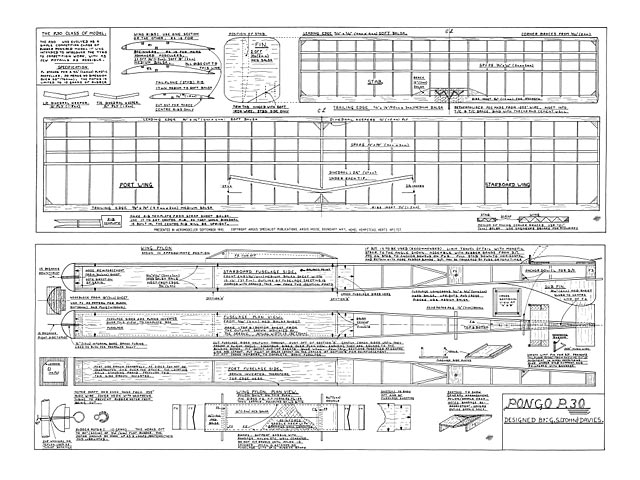 This class of model was evolved from the outset as being suitable for the tyro, an introduction if you will, for the beginners to compete against each other. Now it so happens that the experts also like this class, as it is a wonderful relaxation from more demanding facets of the hobby. That the experts have improved the breed is inescapable, but I can't help thinking that sophisticated designs, and the expertise needed to build them, will take the class away from the very people we are trying to encourage. We have seen all of this before ad nauseum.

The history of Pongo P30. The design parameters of the model presented here are very definitely within the capabilities of a beginner. It was designed, along with two other models for the Canadian Cadet Corps, as an introductory course in aeromodelling. This model has proven to be very easy to make, forgiving of minor building blunders, extremely strong, and most surprisingly, capable of a pretty good performance. It will tolerate a fairly wide CG variation, so the experts can mess around with it, if they wish to chase the model's ultimate performance.

Flying pal Jack Atkinson, by dint of careful wood selection and judicious lightening of the basic fuselage box with a Dremel tool, has turned out a frighteningly competitive version. It is so slow on the glide, that it almost hovers. It has more flights over 2 minutes to its credit than under. It still gives the appearance of flying on rails. Jack roundly curses me for the time he spends in the woods, looking for the thing. So by happy coincidence, we have a model which should satisfy both camps.

I built two models initially, one with a simple airfoil and the other with a more efficient section. There was not too much effort needed in trimming the models, as the high performance version flew perfectly, right off the board. Surprisingly, it was the model with the simple airfoil which needed some slight modifications to the design incidence, requiring 3/32 in packing under the trailing edge of the stab. Once again, because of my field limitations, I trimmed the models for a right power and a right glide. I have to limit the turns to 200, depending on the wind direction. Only on the occasions when I have been able to take the models out to the country, have I been able to realise their full potential.

Perhaps I should mention one experiment made with this model. It was given a folding prop and more than twice the motor, just to see what would happen. The older enthusiasts among us might remember the APS Bazooka (oz5492) and its hair raising performance. Well, that's just what this model reminded me of. Hells bells, but the thing scared the pants off me. No more nice gentle P.30, this was a raging maniac. I am glad the D/T worked - even then I think I was lucky to get the thing back.

Construction Before starting construction, I suggest you make up a kit of all parts. Having everything to hand, will save much time and ill temper later on. Select which rib profile you wish to use, and trace onto 1/32in ply, using carbon paper. Do the same for the stab rib. If one uses these templates carefully, all the ribs should be identical, which is a good start towards a warp freee structure..." 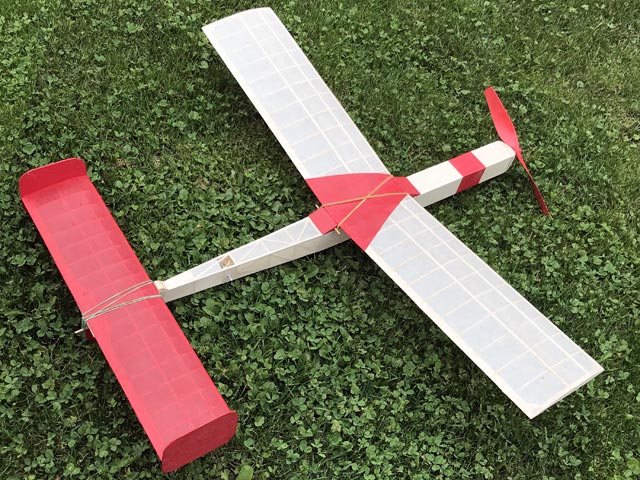