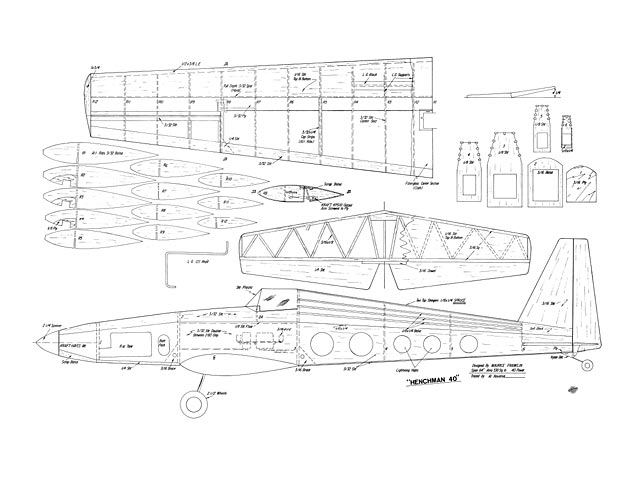 Quote: "Looking for something new? If so, then take a long close look at our smaller version of the very successful Henchman (oz6942) of a year or so ago! In keeping with smaller birds, everything is tidier and quite a bit cheaper. The Henchman 40

Having built and flown the 'plastic toad,' the 'fiberglass monster' and 'the foam thing,' I had forgotten what balsa wood and dope was like. Watching the prefabricated missiles at contests flying at very high speeds, looking at maneuvers so fast that if you blinked your eyes you missed the Four Point Roll, or the Three Loops, re-minded me very much of a ping-pong match (a pain in the neck).

So I thought how nice it would be to slow things down and enjoy steady smooth man-euvers with the economy of the .40 size motor where a gallon of 'Super Sludge' would last longer than a day's flying. I dug out the old plans of the Henchman (oz6942) changed a few things, and came up with the Henchman 40 version made of balsa wood (the stuff they now keep in Fort Knox) and silk, something-the-Japanese-knit, finishing with dope (no, not pot - it's wet, good-smelling stuff).

Building the Henchman 40 was an enjoyable chore, if there is such a thing as an enjoyable chore. It's very cheap to build even at present-day prices - it doesn't take much wood. I changed the wing section to a fully symmetrical one as I am sure it works better than the semi-symmetrical (never thought I would say this) type.

I lightened the construction to a bare minimum; plane and equipment (a K&B .40 F/R and Kraft radio) all came up to a flying weight of 3-3/4 lbs, much better than expected. I also made the landing gear into a tail dragger to save weight, but there's also something about a tail dragger that is so much more enjoyable than the regular three-wheel landing gear - you will find this out when you build the Henchman 40. I must confess that I had a tail wheel in my 'garbage box' which I carried around for years in the hope of using it one day! And at last I did - I'm just a pack rat and hate to throw anything away, always thinking I will need it at some time.

Flying the plane is quite straightforward—it's extremely easy to fly, docile to handle and very forgiving. I would recommend it for the beginner (how unusual) and for the expert (he's the guy who's crashed more than nine times). It flies at a constant steady speed on a 10 x 6 prop, with plenty of time to think between crashes (I mean 'maneuvers').

Inside and outside maneuvers are the same size, due, I think, mainly to the symmetrical section. The roll rate is about as fast as you will want it; knife edge maneuvers are still all there, landings are as slow as you wish to go with no falling off either side, which makes it good for the beginner.

The plane will take off straight up verti-cally, out of sight (this, of course, with the engine running). Speaking of engines, I picked the K&B .40 for its excellent idle. I haven't as yet reset the needle valve after going through four gallons of K&B 500 fuel, which speaks for itself. Of course, this is provided you take care of your radio, keeping it clean, especially the transmitter antenna, by wiping it after each flying session.

You should have a long-lasting plane and many hours of good flying. Always make sure your batteries are fully charged, and you can't go wrong. Good equipment installation is a must..." 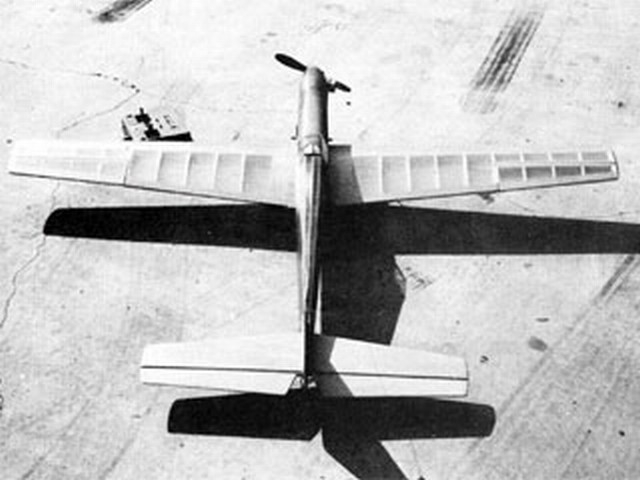