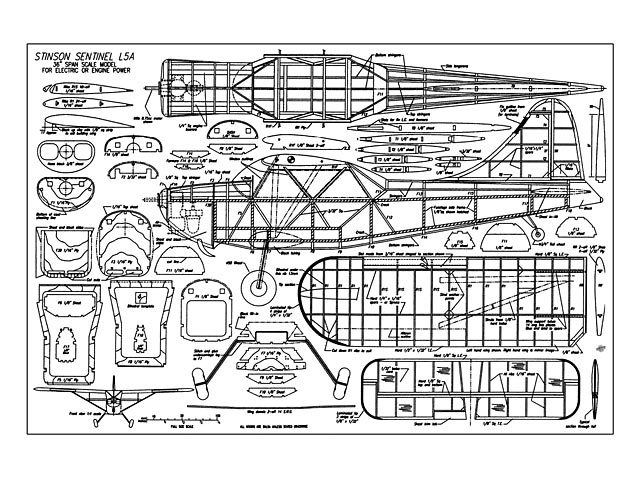 In the summer of 1940, the Stinson Aircraft Division of the Aviation Manufacturing Corporation was taken over by Vultee, to become the Stinson Aircraft Division of Vultee Aircraft Inc. At the time, the popular three-seat Stinson 105 Voyager was adapted for observational duties and ordered into production for the USAAF. Following a number of service modifications this aircraft eventually became re-designated type L5. A total of 1,731 aircraft were manufactured, being used for Coast Guard and ambulance duties. These were respectively designated types L5A & L5B.

Further production variants evolved, culminating in the type L5E. In all 3,590 aircraft were manufactured up to 1945, 100 of these serving with the RAF. Many have survived and are still flying today.

Having already designed and built a 105 Voyager, my attention we drawn to the L5 Sentinel after seeing a photograph in a magazine. As ever at the time, it was another - yes I would like one of those. Many months and much research later, I had what I thought was enough data to start drawing up the design.

I discovered from a copy of the American model magazine Model Aeroplane News that Roy Vaillancourt, a well-known designer of large scale models, had in his portfolio a set of plans for an L5E model. Following my initial design, I sent a copy of my drawing to Roy, asking if he would kindly cast his eye over my drawing. Nothing was
heard for quite some time and my original enthusiasm waned. Then one day a package arrived with a New York postmark. This contained a large amount of information from Roy on the Sentinel L5 and its variants. Not only had he marked up my drawing with modifications but he had included a complete parts manual, along with service history and many colour details and markings - my enthusiasm was once more re-kindled.

Although the full-size aircraft span is 34 feet, to get a fully enclosed motor, I increased the span from 1/12th scale to give a span of 36 in. Having previously built the model of the 105 Voyager, initially as free flight, but later converting it with radio control, this time I set out to install lightweight R/C from the construction stage, this is an option you may wish to consider, the cockpit area has ample space to hide any small R/C equipment.

Construction. Fuselage. This is not a difficult model to construct but probably not one you should tackle as a first scale model project. We will take for granted that at whatever stage you build any of this model, allowance will be made for the parts to set after gluing.

You will see from the plan that the hatched areas form the basis for the fuselage side frames. These are built up from hard strips of 1/8 sq balsa. Construct two of these identical side frames. As the fuselage from former F1 to F12 is a basic box construction, all the formers in this range can be glued to one of the side frames. The other side frame can then be attached on to these formers. Parts RR and R1F for the wing attachment can be positioned onto F5 and F12. Make sure that these pieces are vertical to the fuselage.

A simple progression of the other formers will quickly build up the fuselage shape. Note that former F7 should already have the undercarriage wire attached. The engine bearers can now be glued into the front formers. These have been deliberately spaced wider than the motor mounts, so that a 1/8 motor mounting plate can be used. This plate will have to be cut to suit whatever motor you are using (the prototype used a Mills 1cc diesel). Sheeting can now be added to the top of the nose cowl and the stringers added to the rear and bottom of the fuselage. Glue on the nose block..." 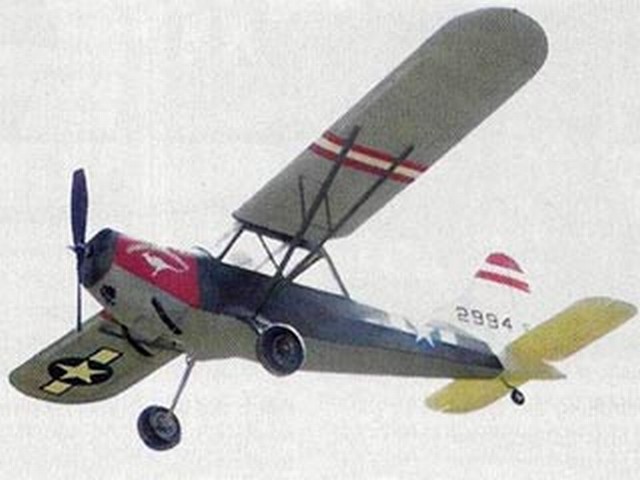