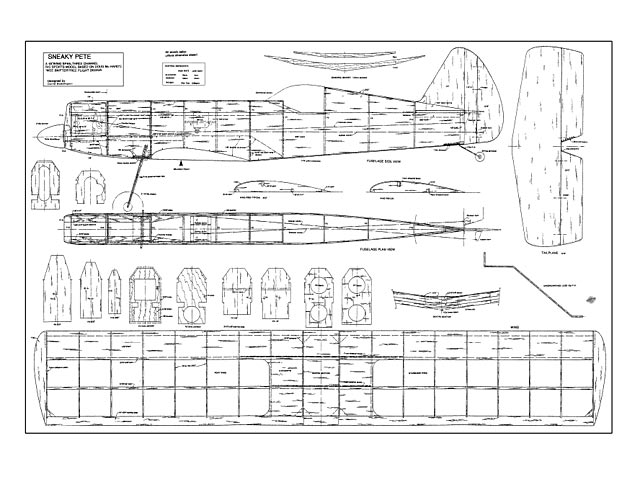 Quote: "Plan Feature. 45 in span version of Wee Snifter, for .30 glow power. In tribute to the late and great Doug McHard, here's an enlarged version of the Wee Snifter (oz1741) FF sports design - for .30 power and RC. Sneaky Pete, designed by David Boddington.

With the death of Doug McHard, we lost not only a first rate designer - mainly of scale free flight models - but also a fantastic builder and finisher of model aeroplanes. Having seen examples of his work over the years, the thing that amazed me was that his skills just got better and better. The last SE5a biplane he built was an improvement, in all respects, on his first model - and that was mighty impressive in itself. As a companion design for the SE5a (oz793), Doug came up with the classic Fokker D7(oz3504) and in September 1962, I built both of these designs - the SE5a flew very well, and the Fokker was knocked off the top of a wardrobe by my eldest son when he was testing the buoyancy of a gas filled balloon (he was all of two years old)! He survived - just - but the model didn't. Doug's original 40 year old Fokker D7 survived, although in a pretty tatty state, the tissue cover had gone quite brittle, but when I heard that it was to be trashed, I couldn't bear the thought of such a work of art being dumped and I drove to Lincolnshire to retrieve it. Just as well that I did because Doug had, many years ago, converted it to single channel rudder-only control and replaced the Mills .75 for an AM10 diesel. Whether it ever flew successfully have no idea - it certainly feels a little on the heavy side.

My original intention as a tribute to Doug was to design and build a free flight WWI biplane, the DH5 with the reverse wing stagger, but with the flying season rapidly approaching and a number of other projects still to be completed, I opted for a simpler model. The January 1961 Model Aircraft featured one of Doug's free flight designs called Wee Snifter (oz1741), a low wing sportster with attractive lines and an upright engine. Powered by the faithful Mills .75 diesel, this little 30 inch span model had generous dihedral and was not, according to Doug, difficult to trim and fly. I hope to prove the latter statement by making a slightly larger version
for a Mills 1.3 diesel but, in the meantime, would concentrate on a 150% increase so that it was suitable for three channel radio, no ailerons, and the new OS 30 four stroke engine (although any 20 to 30 size engine would be OK).

Design-wise, I kept pretty well to Doug's original, although the dihedral was reduced slightly and the top leading edge of the wing was sheeted. What I make no pretence at, is building the model to Doug's immaculate standards - it was built and flown within the week, something that the master would never have contemplated. Why the name 'Sneaky Pete'? Well, 'Wee Snifter' refers to a little drop of the hard stuff and 'Sneaky Pete' is the North American nickname for whisky.

Building. Traditional builders will take one look at the plans and be away - for those with less experience of the well established balsawood/ plywood methods of construction, a few hints might be useful. All designers have their own ways of building the airframe and Doug had a different way of dealing with the flat centre section of the wings, so we will start with the wing structure.

As can be seen frorn the photographs, the two outer panels are constructed with the main and rear spars projecting at the centre and cut at the correct dihedral angle, Both wing panels can be constructed at the same time if your building board is long enough. Pin down the trailing edge, slotted for the rib ends, the rear spar and leading edge and glue the ribs in position. When the glue has set add the top main spar and gussets, followed by the leading edge sheeting. When thoroughly set the wing panels are raised to the required wing tip dihedral, checking for good glue joints for the spars. Glue the trailing and leading edge pieces in position, the gussets and the 'V' blocks over the spars. Before the wing is removed from the board..." 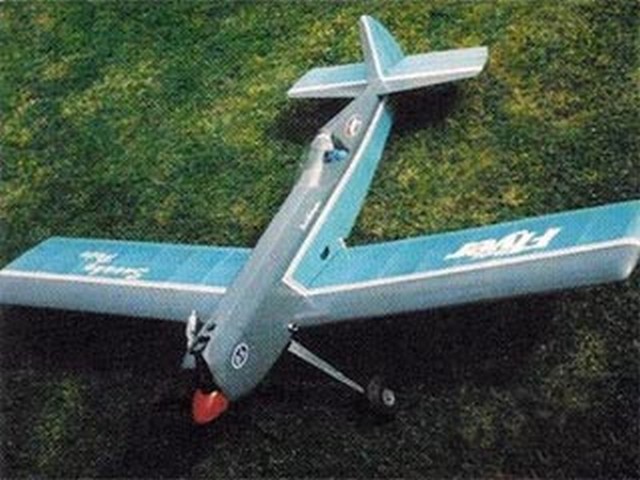