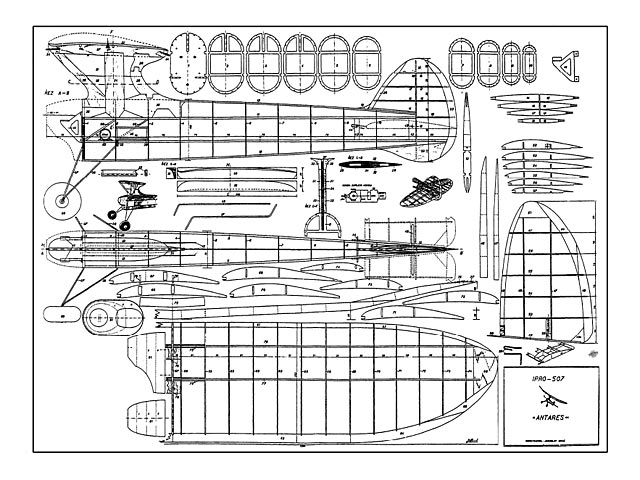 Ipro 507 Antares. Free flight power model. A design originally dating from 1942, this here is a reprint in an article in Model Flyer 2001.

Rather confusingly, the article seems to be about the 1947 Super Antares, but this here plan seems to be the (earlier) 1942 Antares, ref Ipro-507.

Quote: "To rank as a classic, a vintage design needs, above all, a certain charismatic quality. The Super Antares certainly has that in abundance. When I first came across it, in the 1948 Aero Modeller Annual, I was eleven years old. It took me another thirty years to get round to building one, but all that time, the idea of doing so must have been lurking in my subconscious. When I took up aeromodelling again after an eighteen year break, I became aware that, for no reason I could identify, it was a priority - a model I just had to build.

At the time, all I knew about it was what I had read in the Annual. The design, credited to Jaroslav Broz, had been flown by someone identified only by his surname - Horesji - to win the power event at the 1946 Eaton Bray International Week, using a 6 cc Ipro petrol engine. Another name mentioned was Jindra, who flew a similar model at Frauenfeld the following year, placing tenth.

An earlier version, the Antares, was also mentioned. Mr. Horesji's model was not built exactly to either plan - it used a conventional two-wheel undercarriage (like that of the Antares), rather than the single wheel Super Antares undercarriage - otherwise it was 'Super Antares in all respects'.

The only other reference I could find was in the 1952 Aero Modeller Annual, which presents a design by Zdenek Husicka, described as 'developed from Antares and Super Antares'. In fact, I can see no resemblance between that model and the Super Antares at all!

Doing the research presented some initial difficulties - there was not a lot to go on, after all. I started from the fact that at that time, Ivan Horesji was a well-known F1A flyer and I wondered if he might be a relative. I wrote to him and received a very pleasant reply, in which Ivan told me he had nothing in common with Milan Horesji except the name, but that he had managed to obtain a plan for me, from Ari Kalina.

The plan appeared to be a dye-line print from the designer's original pencil drawing. While not up to publication standards, it was quite good enough for building purposes. A few weeks later, David Baker gave me another plan, which was very interesting indeed. It was a professionally drawn version of the same thing, and had obviously been part of a kit bearing the Ipro trademark. Things were beginning to fall into place.

A few years later, some comments I had made in 'SAM 35 Speaks' drew an interesting response from Ron Moulton. Ron suggested, among other things, that 'Jaroslav Broz' might be a tongue-in-cheek pseudonym for Milan Horesji - a necessary precaution given that the Communist government of Czechoslovakia might not have approved of the publication of a Czech design in the West.

Beyond that, the trail went cold and I was content to enjoy the model I had built. The decision to write this article necessitated some more research. The starting point for that was a letter to Jifi Kalina, but no reply appeared, so I tried David Baker again. At the time of writing, he has assured me that he has some material, but the postman has yet to deliver it, so the research is still ongoing.

THE MODEL The Super Antares is one of those models that make nonsense of the contention that pylon designs are ugly. Its smoothly-contoured, elliptical section, stringered fuselage carries a fairly small pylon, swept forward to bring the wing above the engine position. A short rectangular box structure provides the foundation for building the fuselage and no doubt also served to contain the coil and battery on the original model.

A low aspect ratio wing is featured (6.35, according to my calculations). It is a bit of a pig to build, with not one, but two spars threaded through the middle of the ribs. Once built, the structure shows no sign of the warping tendency which often results from that kind of design. The tailplane, oddly enough, is another matter. I have had endless trouble with warps in that component. It has acquired some unintended undercamber, which is very difficult to remove.

The wing is keyed with short dowels locating in vertical holes drilled into the pylon. It did not take long to discover what is wrong with that arrangement..."

Article pages, thanks to RFJ. Includes a page with pic from Aeromodeller Annual 1948. 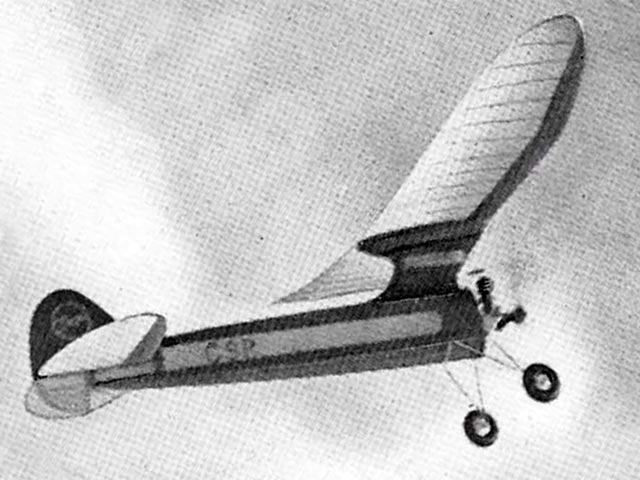