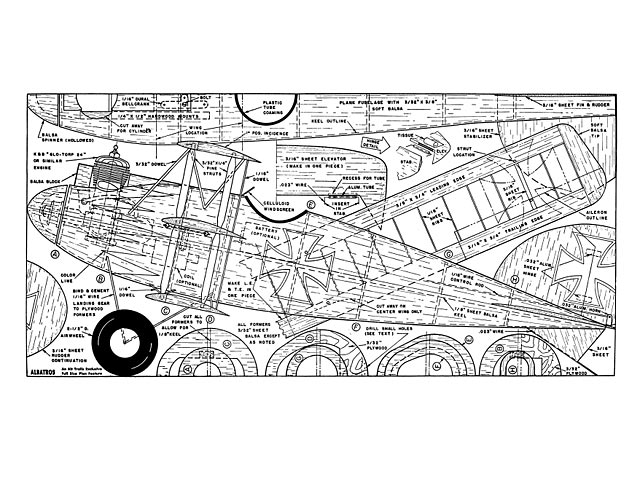 THE 1948 Nationals proved that modelers are showing a decided interest in control-line scale models. Copies of ships from the ancient strut and wire braced jobs to the latest sleek fighters made their appearance, but alas, the triplane was ignored. Why should the very mention of triplane make sonic model builders shudder?

This Albatros Triplane is the fourth 3-winger the author has built and flown, all successfully. Each plane handled with characteristics similar to biplanes. The extra work on that extra wing pays dividends in glamorous appearance and spectator interest, for a triplane always draws a crowd, especially when it flies.

This bullet-nosed scout plane caused more damage to the Allies in World War I than is generally known, and French and English pilots were quick to admit that they respected this tiny product of the famous Albatros Werke. Designed late in 1916, the plane was powered by a 160-hp Mercedes six-cylinder inline liquid-cooled engine. This power plant produced speeds in excess of 136 mph - excellent for that period. The fuselage was of monocoque wood construction, a type of construction popularized in the much later Lockheed designs.

In spite of its fine record, it is said that the wings of this craft were not designed to withstand the strain produced by the speeds at which the plane could dive, thereby causing many accidents through loss of one or two of its wings during a high velocity dive. But then you can't have everything!

Unlike its big brother, the model Tripe can take abuse. In model form the Albatros leaves little to be desired as a moderately fast sport job or scale entree. The 235 square inches of total projected wing area provide enough surface for loops. Construction is very simple. Even the planked fuselage goes together with a minimum of effort. The three wings are identical except for the slight cut in the center wing. Engines from .10 to .35 cu in are recommended.

Begin construction by cutting the 1/8 sheet horizontal keel. To this is cemented the engine mounts. The distance between these mounts will depend on the size of your engine. While this is drying, cut out the fuselage formers from the specified stock. Drill 1/16 holes in the plywood formers as the plan indicates. Cut out the stabilizer and elevator and sand to shape. Cement the stabilizer to the keel and add the formers. Now add the hinges and horn to the elevator and install the bellcrank in the fuselage. It will be noted that a 1-1/2 in bellcrank was used on the prototype model however, a 2 in Veco bellcrank should operate successfully provided it does not interfere with the engine used. Do not alter the pivot point location. The control horn should be secured with a 1/16 bolt and cement.

Bend the landing gear and assemble it before securing same to fuselage. Bind the landing gear joints with soft, fine wire (the tinned wire from milk bottle tops is ideal) and solder well. Wrap the landing gear to the plywood bulkheads with strong thread and apply liberal quantities of cement. Install the control rod. If electric ignition is to be used, install it now.

As already mentioned the wings are a snap. Beveled trailing edges were used on the original but are not necessary. First cut 69 rectangles of 1/16 balsa and 6 of 3/16 balsa measuring 3/8 x 1-3/4 in then cut the leading and trailing edges to proper length and mark off the rib locations. Pin clown the leading and trailing edges on the work bench and slip these rectangles between them. Cement liberally. Cut six wing tips roughly to shape from soft balsa and cement to the ends of each wing. When these structures are thoroughly dry, remove from the bench and go over the joints with cement once again. Meanwhile cut an accurate airfoil template from heavy card and using this as a guide carefully slice the ribs, tips and leading and trailing edges to shape. Sand well. Cut the recess in the center wing and cover all wings with gas model Silkspan. Water and dope once. The center wing is now installed.

This involves cutting into the center wing center section and removing 3/32 in from the front and rear of the three center ribs as well as a strip of covering the same width. This is done to enable the leading and trailing edges to come in contact with formers C and D thus providing a firm support for the wing. Do not cut more than is required for the formers to slide through the wing. Once set in its proper location the wing should be well cemented to the formers. The fuselage is now covered.

Use plenty of cement when planking. Begin by cementing strips 90 degrees apart, ie top, bottom and each fuselage side. Pins are used to hold planking strips in place until dry. Continue by adding strips on each side of those al-ready in place. From now on taper the strips in order to cover the rear of the fuselage in the same proportion as the mid-section. When planking is complete and cement is dry, sand the fuselage until smooth to approximately 1/16 wall thickness and apply a coat of clear dope. Sand when dry.

Cut out the fin and rudder, sand to a streamline cross section and cement to the fuselage. Add the tail skid and sub-fin. Apply one coat of wood filler and set aside to dry. Dope the wings twice again.

At this time the spinner can be cut from soft balsa - a lathe can come in very handy here, but the author used a razor blade. Also cut the interplane struts from pine strips. Note that these are cut in one piece and extend from top to bottom through the center wing. Sand to a streamline shape. The cabane struts are cut from dowel and sanded slightly flat.

Sandpaper the fuselage until smooth and then carefully cut the openings for the cockpit and engine cylinder. Small size plastic fuel line tube was used for the coaming. The model is painted before assembly.

The model in the photos is forest green with white trim. Crosses are black. The builder does not have to adhere to this color scheme because almost any variety of gay colors is suitable. Paint the light colors first, mask off, paint darker shades last. Three coats should produce a fine finish with an application of rubbing compound after the lass coat is thoroughly dry.

Insert the interplane struts through the holes in the 3/16 ribs in the center wing and cement well. Add the dowel cabane struts to the fuselage and be sure they are stuck into the fuselage at least 1/8 in. Use plenty of cement. With a sharp tool make holes in the bottom of the top wing and top of the bottom wing to receive the struts. Add the top wing. The bottom wing must be cut before it can be installed. Using a very sharp razor blade, cut away two thin strips of the trailing edge of the bottom wing in way of the landing gear strut. Save these strips. Install the wing by sliding it through the landing gear (spanwise) and cut tissue in way of the wire strut until the wing is in place. Cement well and when dry re-place the strips in the trailing edge and patch the tissue. Repaint and rub down the patch. Rigging can be added at this time.

The model handles well on forty-five foot lines of .012 in dia stranded steel wire. Because of the large wheels, the Albatros Tripe can be flown from comparatively rough terrain. However, a smooth surface is recommended. The Model may have a tendency to roll towards the circle center when flying high. This can be remedied by the addition of about 1/2 oz of lead weight to the outboard tip. Other than the above, no ad-justments were required on the original model. Be sure to offset the rudder about 1/2 in to keep the lines taut. Balance the model 1/2 in forward of the bellcrank pivot." 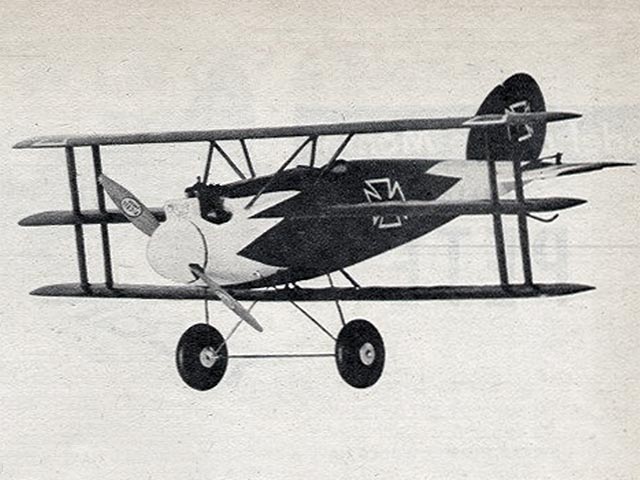 The intro section of the article is strangely error-laden. I have a lot of time for Walt Musciano, but I think he just did a cut-and-paste here. Doing a quick Google search for the story on the real-world Albatros Triplane, it seems it was never put into production. Development was halted at the prototype stage. So. The Albatros Triplane isn't famous, it never saw action, never caused any damage, and never had any accidents caused by either one or two wings falling off. It also seems unlikely that the French and English pilots respected it, since they would have been entirely unaware of it. Granted, Walt didn't have the luxury of Googling for facts at 3 in the morning, while sitting his underpants, like I do. But I wonder which reference he was working from?
SteveWMD - 30/07/2020
Hi Steve, generally an apple doesn't fall very far from his tree. In fact in this case Walt surely used the 3 view appeared on MAN Jan 1948 drawn by W.M. Pittman. In this period in MAN there was a regular column on WW1 planes and rare planes.
Pit - 30/07/2020
I don't think we should judge this era too harshly, it was still a decade or more for the first Profile Pub. or Harleyford, Putnam or Squadron in Action book. There were of course the Wylams, Nietos, Nyes, but sometimes...
Miguel - 30/07/2020
Add a comment