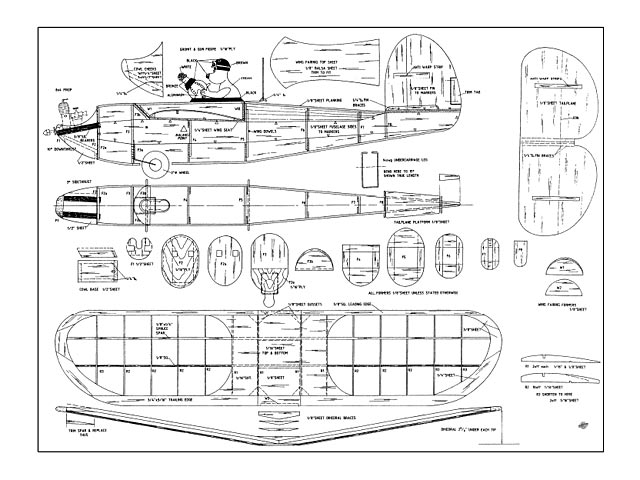 I really enjoyed the Wallace and Gromit TV film 'A Close Shave' and particularly the antics of Gromit in his little red monoplane. Then a replica of Gromit and plane in the form of a car deodoriser caught my eye in my local Halfords and I had to have one! Then another stroke of luck when Gromit was featured on the cap of car shampoo bottles! So what with the deodoriser model and Gromit figure complete with porridge cannon, I had no excuse not to model it. if you are unable to find the shampoo figure, make an outline figure by following the dotted shapes shown on the plan in 1/16 ply, Depron sheet, etc.

Any way, it was modelled as closely as I could to the miniature, as shown in the uncovered shots of the first prototype, although there were severe doubts about the moment arm fuselage area and stuff like that. When flown, it behaved as it was suspected it might - very difficult to trim for a reliable flight. We blamed the pilot - as you can't teach an old dog.

So back to the drawing board and a modified design emerged with a
'sensible' layout that proved to fly well giving rise to the comment that - It's a cracking little monoplane is that. The down thrust and side thrust and CG settings as shown on the plan worked for me.

I suggest you start by making a kit of bits of the sheet parts, formers, bearers and u/c wire, so that the plan, when covered and secured, can be left alone. Use flexible stringy balsa sheet. Don't forget to allow a different spacing to the bearers if using other than a Mills 75.

Construction. I like to make the tailplane and fin first - insert the anti-warp strips and hinge the trim tab with wire, or your own favourite method, after covering. Brace the fin to the tail plane with 1/4 in triangular balsa.

The wings can be built over the plan, but excluding ribs R1, and cut the LE, TE and spars for dihedral when set. The dihedral braces, ribs R1 and gussets come next, followed by the 1/16 sheeting top and bottom. Leave the wing fairing till after the fuselage is finished..." 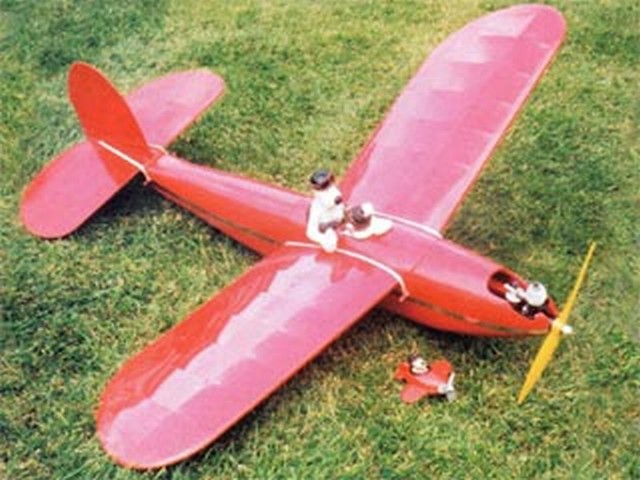