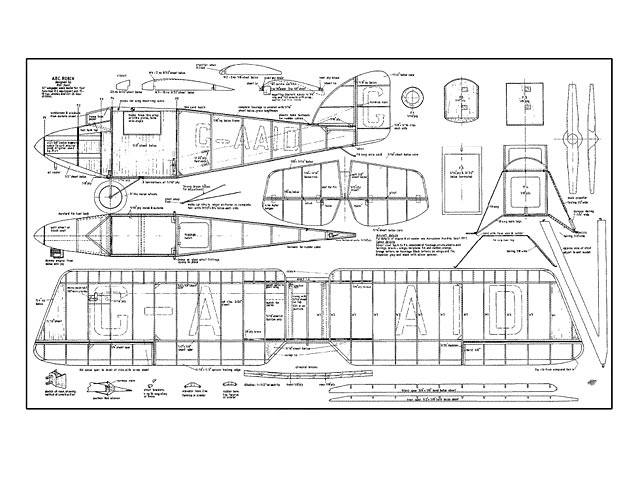 Quote: "Many older modellers will remember the C Rupert Moore cover painting of the July 1946 Aeromodeller which depicted the ABC Robin in its attractive orange and black colour scheme. Inside was a rubber powered scale model plan for the ABC Robin (oz6835) by the master scale modeller Eddie Riding. Many Robins were no doubt constructed from this plan (mine was never finished) as it had ideal proportions for flying.

ABC Motors Ltd were manufactur-ing two cylinder horizontally opposed Mk II Scorpion engines of 35 bhp in the middle 1920s and although they were exporting them in measurable numbers their use in this country was limited. The managing director Mr T. A. Dennis decided that ABC should provide a suitable airframe for the Scorpion and the Robin was the result.

Construction started in 1928 and the aircraft was completed in June 1929. The colour scheme was National Fl-ing Services' black and orange with natural aluminium cowl. The perfor-mance was better than expected and its advertised price was £375. Modifications were made later which included a larger fin and rudder and alt-erations to .the windscreen. Although the future of the Robin looked assured only the prototype was ever built and it was actually scrapped in 1932. Aeroplane Monthly described the Robin in their September 1977 issue.

Building. I always like to get the tailsurfaces, fin and rudder built first. The construction of all these parts is basically the same and follows the well-known method used on free flight scale models. Sheet balsa cores are cut to outline shape and the positions of the ribs are pricked through with a pin to indicate the rib positions on both sides. Pin the core down and cement LE, spars and ribs down for each part. When dry, repeat the operation on the other side. The tail surfaces are then sanded to a symmetrical section as shown. Control horns and hinge doublers complete the structures which are now ready for covering. Note that trailing edge pieces are not fitted, the 1/16 in sheet core being quite adequate.

Fuselage. The fuselage is built in three parts: a nose section, cockpit section and the tail section. The tail section is a 1/8 in sq balsa frame built directly over the plan. The nose has 1/8 sheet sides with 1/8 ply formers. The engine bearers are spaced to suit the motor being used and a mustard tin tank is used. The original model was fitted with the HP VT-21 and these are the bearer spacings on the plan. The cockpit section uses 1/8 sheet sides with a 1/8 ply former at the front and a 1/16 and 3/32 laminated former at the rear. The undercarriage assembly is fabricated at this stage..."