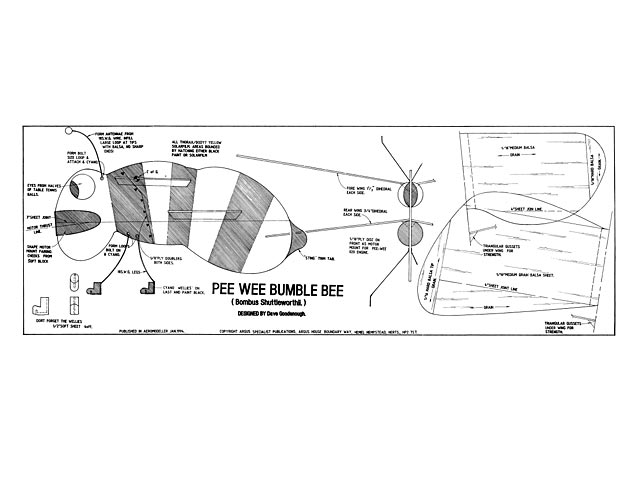 Quote: "Dave Goodenough tells us how he created and tamed this rare insect

In a small corner of Bedfordshire a new insect species has recently been discovered. It's a shy creature, with angry and erratic behaviour when disturbed. 'Bombus Shuttleworthii' or the Pee Wee Bumble Bee was spied for the first time at ASP Small Models Day, probably blown off course by the prevailing strong winds.

Once traced to its hive by the side of the East-West runway, careful observation revealed the creature feeding on 16 nitro nectar. Once replete, said bee flung itself skywards in a flight pattern straight out of PE Norman's - That's the way to do it - manual. Once aloft it made a bee-line (What else?) toward the De Havilland hangar. On the way it spotted a gold coloured car that it shortsightedly regarded as a rival and attacked it. (Sorry mate!). Result, car 1 bee 0. Once resuscitated it set off on its travels again but, unknown to us amateur entomologists, had o/d'd on nectar.

Sadly it was last seen wandering aimlessly over the Swiss garden and despite a search party was presumed to have gone to the great swarm in the sky. Slightly later in the day, a chap knowledgable in matters 'Bee', used his cream and maroon striped sweat shirt to confuse and recapture our exhausted bumbling Bombus from its hiding place, deep in the undergrowth. (Many thanks to you). Unfortunately our intrepid insect was not the same after its adventure and spent most of the remaining day sulking at its hive, sheltering from the gale.

Ill conceived at 13:1 scale, whilst imbibing in a glass or several of my favourite Shiraz-Cabernet tipple, Pee Wee Bumble Bee had to be easy and quick to build. Recalling the simplicity of Eric Clutton's Sharkface (oz4416) and the awesome power of Cox's Pee-Wee 020 from my formative years, what better way to go?

The fuselage. First cut the fuselage halves from 1/8 med sheet and butt join at the centre line with PVA. Add the ply nose doublers then round off the outline edges with your favourite abrasive. Cut the wing slots then cover the whole with yellow Solarfilm. Add the 3 black body stripes with paint or Solartrim then carefully cut through the covering and scrape it away at (1) the motor mount area and (2) under both wing roots for 1/2 in on both sides of the fuselage. These will provide the gluing areas for later.

Shape the nose cheeks from softish block and blend into the circular 1/16 ply motor mount. Glue to the fuselage with PVA or epoxy and fuel proof well - I used black Solac. Cut a table tennis ball in half, be careful they're quite tough, and fix where shown. The easiest method is to lay the fuselage on its side, smear a thick line of epoxy around the inside edge of the eye, drop it into position, then let the adhesive run into the joint. Devcon 5 minute works best.

Bend the legs and antennae from 18 swg piano wire, forming small loops at the fuselage ends for bolting in place. As you tighten the fixings, crush them slightly into the ply doublers to provide a firm mount and then wick some cyano around the joint for security. Please don't forget either the antennae tip loop or the wellies as these make the wire ends safe..." 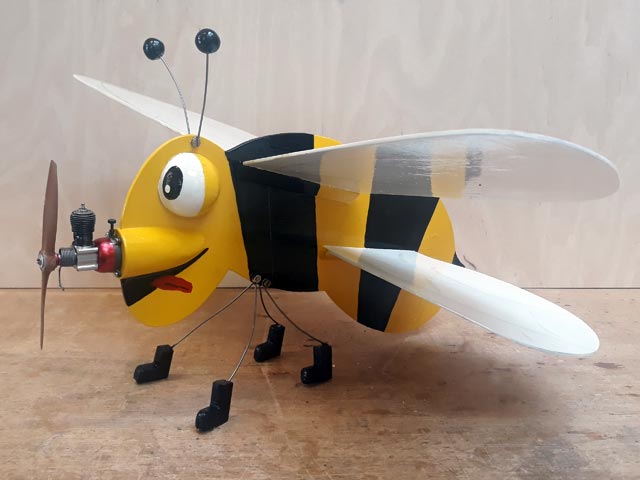 Hi Mary, we did some testflights with the Bumblebee today [see model pic and 005,006], but it's flying very unstable - it crashed hard and I think its best place is above the bed of my nephew Anton, 9 days old ;) I still started the next project! Thanks for this amazing Homepage!
PhilippS - 01/10/2019
Add a comment