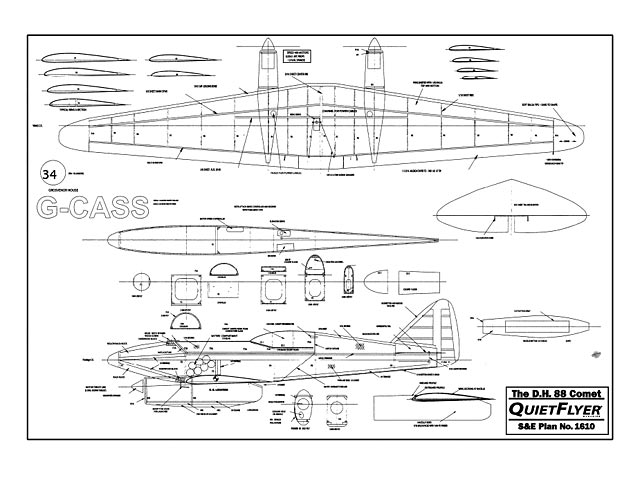 Quote: "DH 88 Comet. The original full-scale de Havilland D.H. 88 Comet first flew in 1934. The Comet was designed and built to compete in an air race from London, England, to Melbourne, Australia: the 'MacRobertson' race. The prize money for this race was about $100,000. The race was run over a distance of 12,300+ miles. Charles Scott and Tom Campbell Black's red-and-white 'Grosvenor House' Comet (one of three Comets entered) won the race. A KLM Douglas DC-2 came in second, with another Comet finishing third. (Incidentally, the first stop after leaving London was Baghdad!)

The D.H. 88 was a beautiful aircraft that has motivated many modelers to build replicas. I was motivated to build my Comet by Mark Rittinger's article about his Sportwin design, which was published in the July 2001 issue of S&E Modeler. The Sportwin inspired me to have another go at this new Comet. My electric-pow-ered scale model is not quite to scale out-line; if it had been built to scale, it would have wingtips just 2 in. in chord. To "tame" the airplane, I increased the wingtip chord to 3 in. and added 2 in. to the moment arm — the distance between the wing and the tail. This is my second attempt at building a model of this aircraft. The first model was heavy and tip stalled very eas-ily, as did the full-size Comet.

Lightweight construction and strength are now my aim when building any model. Even so, the wing loading of this new model is quite high at 21 oz/sq ft. Consequently, I have only launched my Comet with the aid of a pedal launcher (described in the September 1999 issue of S&E Modeler). A strong arm and a straight throw might also get the airplane up to flying speed, though.

Wing Construction. I used cyanoacrylate (CA) glue for all of the model's balsa-to-balsa joints, and carpenter's aliphatic glue for the joints between plywood parts.

The wing's construction started with the assembly of sheets of 1/32-in medium-grade balsa wood to form the one-piece upper and lower wing skin surfaces that extend tip to tip.

After you have the wing skins made, mark out the locations of the spars and ribs on the lower skin. I recommend using carbon paper to transfer these spar and rib lines to the balsa..." 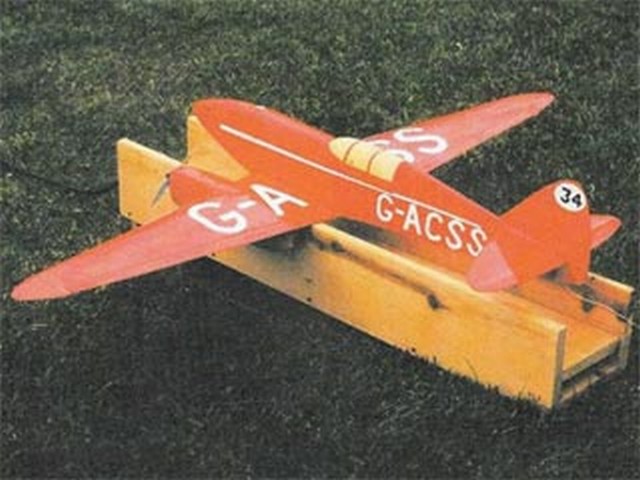