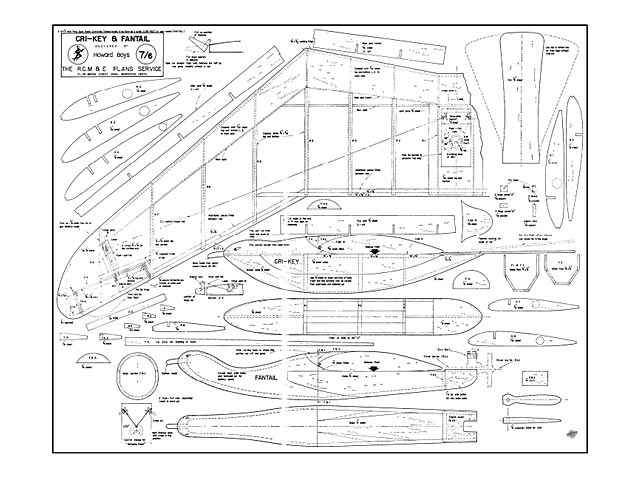 Cri-Key and Fantail. Radio control sport flying wing design, styled to look like a bird. Two fuselage variants are shown for either a glider, or a pusher-prop .5 cc engine version.

Quote: "Cri-Key and Fantail ...if you really are looking for something different, try this 54-1/2 in span powered or soaring 'bird' for size. By Howard Boys.

When visiting Old Warden, I saw the fuselage of Archaeopteryx, and remembered it landing at Sywell many years ago. The flying was most impressive and Mr. Grainger had said they fitted a rudder because it gave better steering than ailerons. My early R/C models (Circa 1948-50 Ed.) steered well on ailerons but difficulties arose when changing to all-transistor radio. The reminder of Archaeopteryx caused the building of a small fuselage with rudder, and Mills .75 cc engine, and using the outer panels of the 1948 record model, which were also the wings or my first large rocket model in 1945, resulted in some very good flying.

The only difficulty was the very far forward position of the wing. A new wing of different shape was made, and the name CAW seemed natural so it was covered in black paper. The next model, of course, just had to be 'Cri-Key', covered white with a Sea-gulls head. Since a small model called 'Tweet' had been made some years ago a few more names soon came to mind. 'Fantail' a pusher version, 'Orter Wagtail' a GG version of 'CAW' and 'lapwing' a GG version of 'Fantail'.

Originally 'Fantail' was to have more sweepback to carry the rear mounted engine, but the Editor was once criticised for too many unorthodox designs, so it was decided to go further forward for balance. First flights with 'Fantail' were made with the Mills .75 cc engine, but the speed and climb were so good that a .5 cc Dart was tried, and found to give very good flying, using a left-handed prop carved from a bit of straight-grained firewood. A diameter of just over seven inches and pitch of about four inches gave satisfactory results. A copy of half the blank used is drawn on t!lc. plan (Don't forget to make two blades!).

The design work on these models was by the 'hunch and crunch' systems, but fortunately, due to long experience, the only crunches came from radio faults.

At one stage Cri-Key was tried without radio, the ailerons being set flush with the wing surface, and the broader tail fitted. A piece of plasticine weighing about 1 oz was pushed well up into the head to get the CG in the right place, and the angle of the tail adjusted. As an alternative to the trim tabs shown, the wing tip could be cut across and hinged. Another variation would be to use an area equal to the aileron, tilted up to half the fully up position shown on the drawing, and use the narrow tail at very small angle as shown.

These models have been designed as straightforward tailless types, with a bird's head just for looks. After all a bird flies normally without using its tail. The tail is used only at low speed to give more lift, in the same way that a full-size aeroplane uses wing flaps.

Judging by the way Fantail has behaved when interference has taken over, it would make an interesting free-flight model. Flaps to act as elevators would have to be fitted in place of the ailerons,and weight would have to be added inside the head. Do not use an engine of more than .5 cc for free-flight.

The actuator used is fairly economical, the average current drain being about 80 milliamps, so a simple No. 8 battery gives a reasonable life. The neck of Fantail was made to take such a battery,but it could be made larger, if desired.

Cri-Key has been tried out with a Galloping Ghost scheme with the linkage shown in the bottom left-hand corner of the drawing, and it behaved very well, though some people might like larger control surfaces for this. For the tests the broad tail was used, and an old Micro-max motor with the gearing reduced to one train. A three-volt centre tapped battery supplied both receiver and motor, so not much power was available for control, but the main purpose of the test was to prove that the simple linkage would operate satisfactorily in flight. Site conditions did not allow any attempts at aerobatics, but it was felt that larger control surfaces and a more power-ful actuator motor would be needed. This may be tried at a later date as it would be interesting to see what a gull looks like doing a loop..." 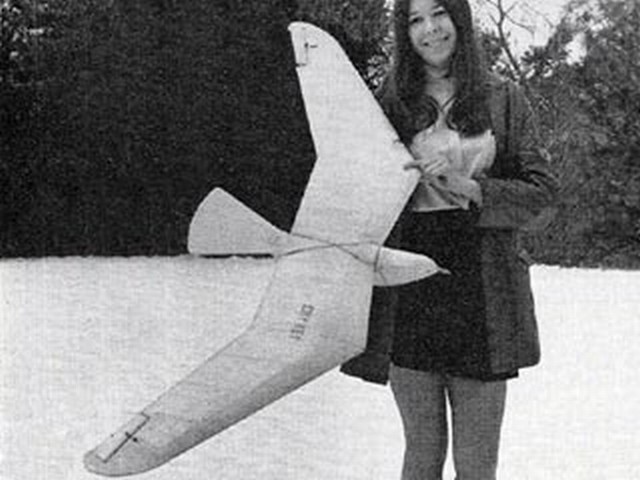