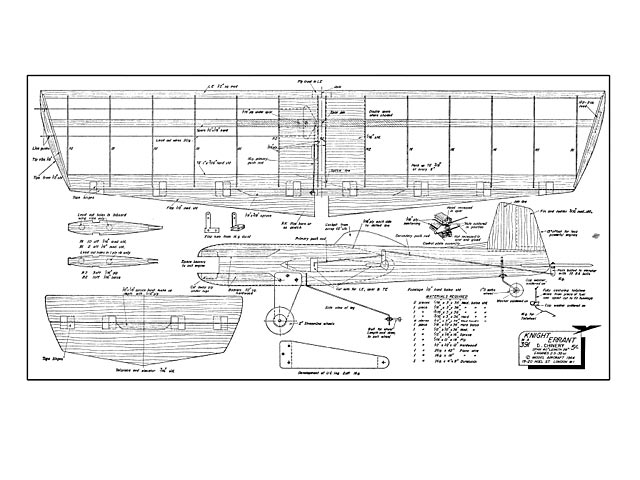 Knight Errant has been developed as an easy-to-build stunter for 2..5 cc engines which, although fully stuntable, yet remains sufficiently docile for a beginner. For the real novice the flaps should be fixed and disconnected, when the model makes a very stable trainer.

Construction. Wing. Cut out all ribs and components, splice the TE and join the spars with doublers over the centre 12 in. Drill the hole for the bellcrank pivot in both spars and pin bottom spar down on plan. Pin the TE down on top of 1 in packing at alternate ribs, then glue the ribs to the spar and TE.

Fix lead-outs to the bellcrank using the soldered loop method detailed on the plan. Cut primary push rod to approx. length and locate forward end in the bellcrank, using a soldered cup washer. Fix the bellcrank pivot bolt in top spar, recessing the head and fit the bellcrank, spacing it along the bolt with soldered on nuts as shown in the diagram. Holding the bellcrank on the bolt, pass the lead outs through the holes in the inboard ribs, until the bottom end of the bolt drops into the hole in the bottom spar and glue spar in rib slots.

Carve LE to section, slot rear face to fit ribs and glue in position, using the small piece of ply to key the halves together. When all the joints are set, remove the wing from the plan and screw the nut on the lower end of the bellcrank bolt, recessing as for the bolt head. Fill both recesses with balsa cement to stop rotation..."

Over the years, I have had many designs and articles published in the magazines, and wrote my regular 'Flying Sparks' column in RCM&E for about 15 years. Clearing out some old papers recently, I came across an issue of Model Aircraft magazine for May 1964 containing my first published plan - a 1 metre span control-liner, the profile fuselage 'Knight Errant'. The original flew well with a Rivers 2.5 cc Silver Streak and lasted until a friend tried a bunt from about 6 ft up! The model featured a new interlocking construction to avoid the then-common problem of wing/profile fuselage joints loosening after a few heavy landings and fuel soakage. Much later in life I was to become a professional inventor, and I think this new joint was my first 'proper' invention! It is described in more detail below and shown in the photos.

RC flying at my regular Club site will be in peril if the promised (threatened?) Runway 3 materialises at Heathrow. Although likely to be a long process (will I still be flying in my 80's in 10 years time?), if it happens, the proposed approach path passes low over our site and will end RC flying there. So the only acceptable way to fly will be Control-Line (CL). It is years since I last flew CL, the last time flying one of my pioneering EDF Hawk Fun-jets in the National Hall at Olympia about 1995! So, with the impetus of the flightpath problem, and the old magazine, this spurred me on to build a new KE model.

A few years ago, I inherited a Rivers 2.5 from a deceased clubmate, so I could reproduce the original model almost completely. Having 'blown up' the plan image from the magazine, I drew a new full-size plan and started to build. The wing structure (Fig.1) is conventional with 12mm x 3mm spars and assorted 2mm and 3mm balsa ribs. Nowadays, 100cm long balsa is available if you know where to look, but I joined 50cm long half spars with 30cm doublers in the centre to reinforce it.

The main innovation is the wing to fuselage joint. Two ribs are spaced 12mm apart in the centre, with 1.5mm sheeting each side to the next rib, after installing the belicrank, etc. (Figs 2 and 3). This leaves a 12mm wide slot..." 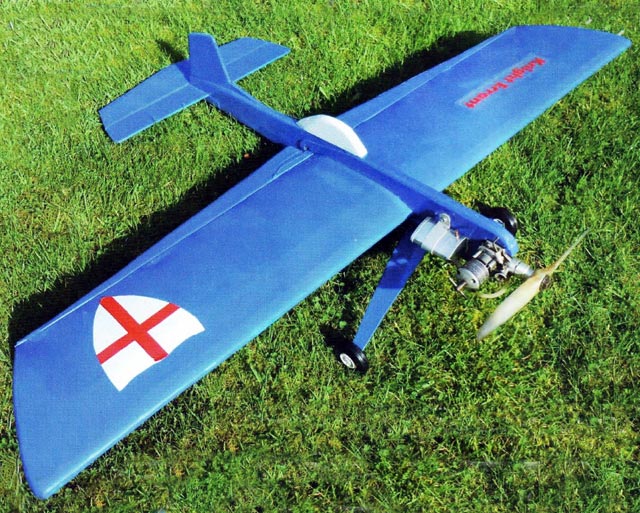