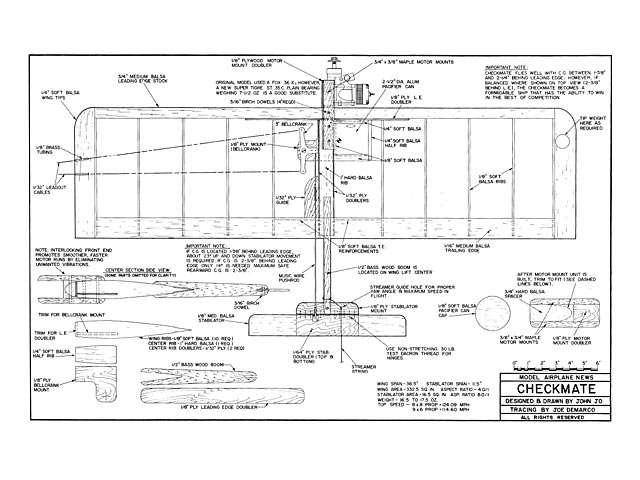 Quote: "Checkmate by John Jo. Light, fast, tight-turning, durable and tiny; one can't do much better than this compact combat terror. Watch out - or build one to make the other guy worry!

Big, heavy, elephant motors mounted on elephant-size airplanes that project elephant-like drag profiles in flight seem to be the current fad in combat design. Elephants are nice, and they do get the job done, but a cheetah is sleeker and deadlier. The Checkmate is like the cheetah.

At the 1981 Nats, the Checkmate made its contest debut. Many underestimated the design because of its puny, sand-in-the-face physique. Some thought they could easily bully it around in a combat match. They were proved wrong. The Checkmate outclassed many of its bigger rivals, finally reaching 9th place (tie) at the Texas Nats. I was extremely happy with the Checkmate's flight performance in its initial contest baptism. The plane was everything I had hoped for in a combat design.

Where does the Checkmate's success come from? The Checkmate derives its combat 'muscle' not through a trick mirror - which might make the Checkmate look bigger than it really is - but through the use of aerodynamic and mechanical judo in its design concept. In the original planning, major improvements were sought in three different areas to give the Checkmate advantages in combat competition. The significant goals of improvement were:

For a better explanation of these Checkmate features, let's go through them in detail.

Less Frontal Resistance And Turn Drag. According to aerodynamic formula, if two planes have equal wing area, the wing with the higher aspect ratio produces less induced drag through a turn, but generates more frontal resistance in level flight..." 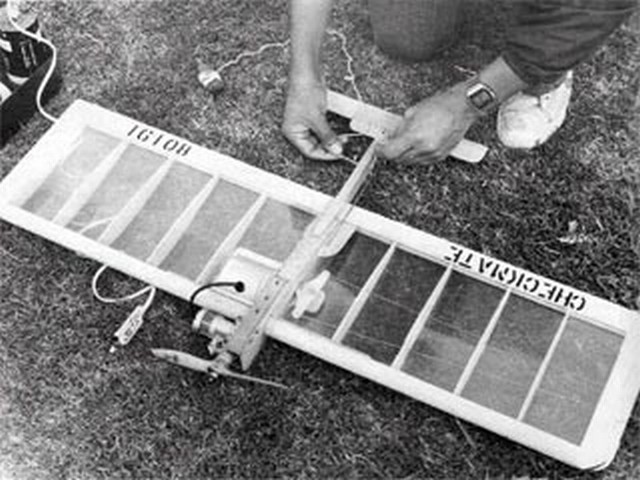