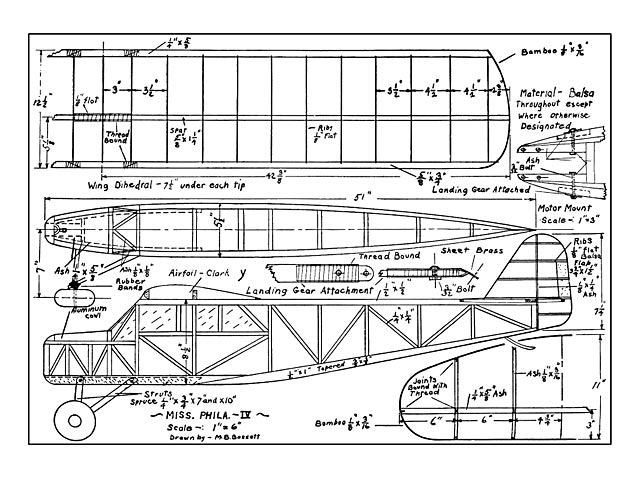 Quote: "Undoubtly, many of you model builders have been looking for plans for a gas model which can easily be built, and which will fly consistently and well. Here is just what you want - Miss Philadelphia IV - and the skeptical builder who needs proof of her ability must merely consider the performances of the original ship, and the records that it established.

In May 1933, Miss Philadelphia IV was launched from Camden Airport, NJ, and made a continuous flight lasting two-and-a-half hours (unofficial) over a total distance estimated at 180 miles - almost the distance from New York to Baltimore! She crossed three states - New Jersey, Pennsylvania and Delaware, and missed Maryland only by four miles. At times she reached an altitude of 8000 feet. For this flight, the ship of course carried an abundance of fuel in an oversize gas tank. Moreover, Miss Philadelphia IV also won many contests including the 1934 Texaco Gas Model event at Akron.

The original model is now retired, being 'preserved for posterity' in a display room in Philadelphia’s Franklin Institute Museum.

The Model. Our Miss Philadelphia IV flies at a medium rate of speed, climbs at an unusually steep angle, and has good gliding qualities. But most important of all to the gas model fan, it is an easy model to build. An experienced rubber-powered model maker should have very little trouble if the usual care is taken. The wing, incidentally, is removable, hence the plane can be carried very conveniently.

The cost of your model should not exceed seven dollars. And if you are careful in buying your supplies, you may be able to build it for five! Before starting construction, study the drawings and read the article two or three times, thoroughly.

The wing, tail and fuselage plans must be enlarged to full size. This can be done with a pair of dividers, or by taking measurements direct from the drawing and multiplying by the scale of the particular part.

The model has a wing spread of 84-3/4 in, and an overall length of 51in. Ready to fly, with motor, batteries, and fuel, it should not weigh any more than 5 pounds. In the original ship, I used a Brown Junior Motor, but, with a slight change in the motor mount, any similar motor of about the same size and weight will fly her just as well.

In building, take your time. Be sure every piece is perfect before going on to the next. Be especially careful that the tail and wing surfaces are absolutely true and are not warped during construction. Use plenty of cement - go over every joint at least once or twice, until you are sure each is perfect. Again, do not spare any cement, for strong joints make the strong ship!

Balsa is used throughout - except where otherwise noted - and should be of a medium or hard grade. Use only high grade materials. Poor or cheap stuff never has, and never will, make a championship model..." 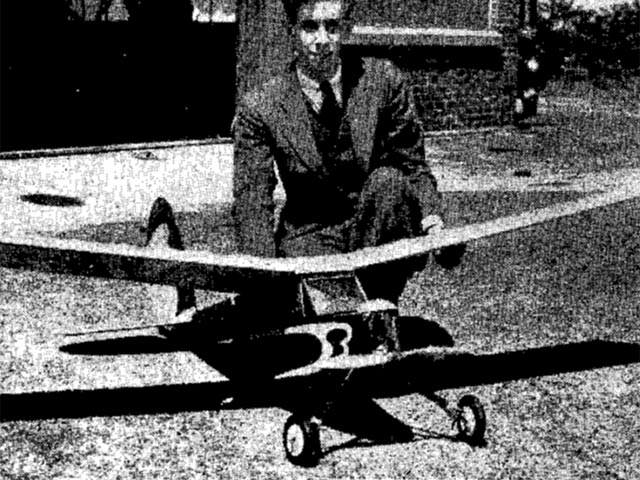 Steve, Does anyone know why the fin drawn on the plan is very different to that shown on all the photos AND on the Frank Zaic drawing (shown in one of the "more pics.")? Regards,
Brian - 29/06/2018
Me, I didn't notice that, at all. Anyone out there know why the fin is different? Were there 2 versions of the Miss Philadelphia 4?
SteveWMD - 29/06/2018
There are two known versions. Picture 008 shows an early Mk. I version and the plan Mk. II. It is also known that M. Bassett has performed many experiments with differents tail fins and wings. Back in the '30s, it was quite common to build a model first, and then later the plan was drawn (based on the current model version) and published.
Stanley J. Stembera - 05/05/2021
Back in the day, the biggest problem for model builders was the dreaded "spiral dive". The model would be flying along just fine until hit by a gust or thermal, then it would start a turn that got steeper until it hit the ground. Many designs used HUGE fins to try and control the effect. (See Quaker) But it didn't work. Finally, someone figured out that making the fin and rudder SMALLER actually helped, as did more dihedral. It turned out to be a balancing act between fin size and dihedral that proved effective. I've had the same age-old problem with a hand launch glider. Cut a small amount off the fin and problem solved. Cut off too much and you get the opposite, dutch roll. Best to make the fin too big and then cut it down as needed. Models aren't the only aircraft with this problem. When the P-51 bubble canopy D model appeared, it needed more fin area. Instead of building a whole new fin and rudder, they just added a dorsal fin in front. Fixed it.
Doug Smith - 06/05/2021
Add a comment