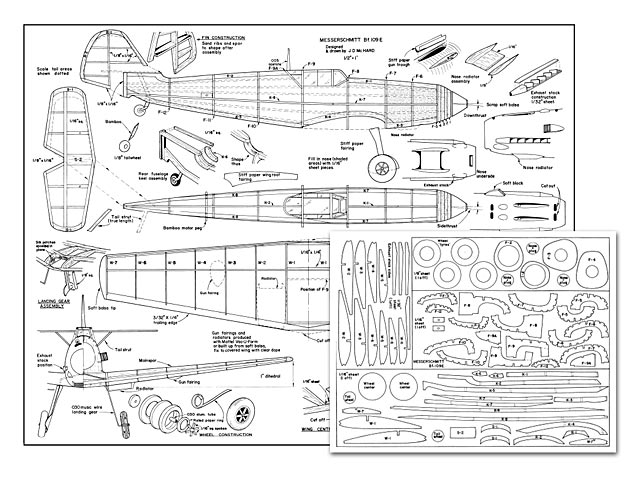 Quote: "The compactness of the Bf 109E is brought home in no uncertain manner when this model is viewed alongside the other models in this book... all of which are to the same 1/24th scale. It was a small machine, even by contemporary standards, and for example, the Hawker Hurricane and Thunderbolt look positively gigantic in comparison.

The Messerschmitt design was commenced in 1934 and it was the first fighter to be developed by the company. It was of advanced design, employing stressed skin construction, and the prototype flew in September the following year... with a Rolls Royce engine!

Armament was inferior to the British Spitfire and Hurricane, each of which carried eight .303 wing mounted machine guns. The Bf 109 initially had only two top fuselage mounted, rifle caliber guns and one more (later to be replaced by a 20 mm cannon) firing through the hollow propeller shaft. The production Bf 109E carried two wing mounted 20 mm cannon and two fuselage mounted MG17s.

Blooded in the Spanish civil war, the 109 went on to achieve the largest production run of any World War II aircraft. It served in all European and North African theaters of war and was well like by its pilots.

Top speed was 357 mph, and although some performance characteristics showed certain shortcomings, in practice, the machine was closely matched to its British opposite numbers. The outcome of a dog fight would depend much more upon the relative skills of the opposing pilots than upon any performance advantage of the respective aircraft.

Our model is based upon a machine of 8/JG I with yellow under-nose and wing tip undersides and black '13' outlined in red.

Construction: As previously mentioned, the smallness of the 109 is not generally appreciated until it is compared with a series of similarly scaled fighter aircraft, such as those contained in this book. In order to retain flying performance it is even more important than in larger models to watch the weight. The structure is therefore quite severely 'edited' while at the same time an attempt has been made to retain a relatively rugged airframe. It is very conventional, but care must be taken in assembly to ensure a warp-free model..."

Update 02/07/2015: Replaced this plan with revised version (fin shape corrected) thanks to StuartBurling. 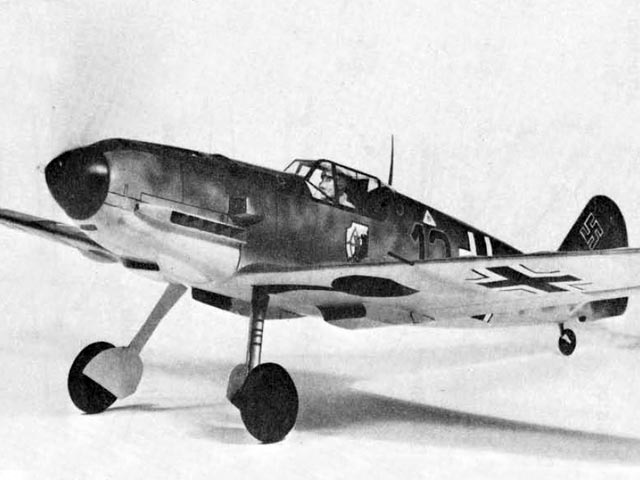 The photos of the bf109 model were found here: http://www.britmodeller.com/forums/index.php?showtopic=61765
SteveWMD - 06/10/2012
Hi Steve - another tail correction for one of Doug McHard's designs, this time his Messerschmitt 109 [for before and after: see more pics 005]. I believe these errors crept in when the original scans were taken from a well-known book - it so happens that, as published, the tails of some of Doug's models got lost in the spine of the book and look foreshortened as a result. I have two copies of the book, one of which I cut up and assembled into plans many years ago, so this corrected shape is the one Doug intended. Regards,
StuartBurling - 02/07/2015
Add a comment