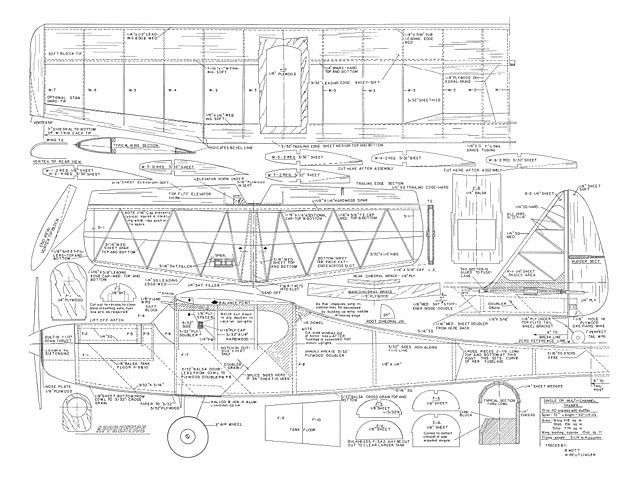 Quote: "Designed specifically for the beginner or newcomer to RC, the Apprentice permits all the normal errors of building and flying and still has that extra something for the good flight. Apprentice, by Bill Northrop.

The Apprentice was designed specifically for the model builder who has decided to move into radio control. It was particularly designed for the beginning R/Cer who is located in a low R/C activity area and who will not have the help of an experienced pilot during the first flights.

On the other hand, the Apprentice is the perfect ship for the verteran R/Cer to build for his young son who is showing that significant gleam of interest in his eye. And by the way, if your wife or girl friend has finally given signs of resigning herself to her fate and wants to 'try it sometime,' build her a pink Apprentice and put curtains in the windows.

To suit the above requirements, we felt the ship needed an important design factor that has been left out of most present day 'trainers'. The plane should be large enough, and light enough, to fly steadily and slowly, giving the new pilot time to think about his next control movement.

This design consideration also provides another important factor missing in most so called beginner's airplanes. It is no particular problem for an experienced flier to have a somewhat badly trimmed airplane on its first flight, but the beginner has three strikes against him right at the start: an untried airplane, an untried radio (the bench and the air seem to be unrelated as far as radio operation is concerned), and an untried pilot. A large, lightweight airplane will permit test gliding, an almost forgotten art as applied to R/C. Through a series of test glides, the plane, the pilot, and the control system all have a chance to become acquainted with each other under less strained conditions, so that when the big moment occurs, that first powered flight, there is a better chance of survival all around. Most any experienced R/C pilot, if he's willing to admit it and can accurately recall his first controlled flight, will go along with this.

Another point in favor of a large, light airplane like the Apprentice is that it will take almost any kind of radio equipment. If the new R/Cer is fortunate enough to be able to afford a multi proportional system, there is no need to feel obligated to install it in a typical multi bird for his first flying lesson, nor should he feel obliged to work his way up through the single channel route. In the long run, if you are pretty sure of ending up with multi propo equipment, it would actually be cheaper to start out with it. Work your way up through the airplanes, not the radios.

On the other hand, the Apprentice will be perfectly at home in the air with reeds, with single channel decoded systems, with Galloping Ghost, pulse rudder (a little too big for magnetic actuators), and motorized or rubber powered escapements.

We were asked if ailerons could be put on the ship, and this brings out another key point of the design, the inherent stability. Even Webster's old 1941 Collegiate Dictionary has that one figured. Webster says inherent stability is the 'firmly infixed (inherent) property of a body which causes it, when disturbed from a condition of equilibrium or steady motion (stability), to develop forces or moments which tend to restore the body to its original condition.' In other words, the Apprentice, like any properly trimmed free flight model, will take care of itself in the air. If you disturb its otherwise tranquil flight by applying rudder and/or elevator, it will respond by going left or right and/or up or down, but, as soon as you neutralize controls, and with most systems this means releasing the stick(s), toggle(s), or button(s), the Apprentice's inherent stability will take over and return the ship to normal flight - a comforting thought if you're a tyro and get yourself in a jam.

Now, about those ailerons. The inherently stable airplane will respond nicely to elevator and rudder controls, but it has rather fixed ideas about being induced to roll with ailerons. In many LS. designs, the plane will actually yaw in the opposite direction from the aileron control given! The cure for this is to make the airplane unstable about its longitudinal axis, or fuselage centerline. The simplest way to do this is to drop the dihedral. In fact, without even resorting to ailerons, you can increase the maneuver-ability of an airplane (also increase its instability) by lowering the dihedral somewhat. However, now the airplane will require constant control corrections to keep it in level flight. It cannot take care of itself and will crash if the pilot does not make up for its lack of stability.

This type of instability is not bad. It's a necessary ingredient of airplanes designed for maximum stunt capability, but the beginning flier needs this like a hole in the head. Until you can take off, fly around for ten mintes, land, and be perfectly relaxed and on top of the whole situation from beginning to end, you're not ready for an airplane that demands constant 'second nature' attention thoughout its flight. End of sermon.

We had originally planned to include flying instructions in this article, aimed at the indivdual who does not have access to the assistance of an experienced pilot. Before we knew it, a separate article was developing. It just can't be done in a few words. So, get busy now and build the Apprentice. We'll get you into the air next month.

CONSTRUCTION: WING: Although the wing has our own SSS302 airfoil (Somewhat Semi-Symmetrical. The 302 is our Area Code), it can and should be constructed on a flat, true surface. The section is actually straight on the bottom from the spar on back. Washout is built into the outer, twelve inch tapered portion of each panel.

After covering the wing plan with Cut-Rite or Saran plastic film, begin construction by pinning down the bottom trailing edge of the inner straight portion of the wing in addition to the bottom 1/4 inch square spar. The latter must be blocked up off the board with scraps of 3/32 inch balsa. Angle the spar hold down pins toward the rear so they will not interfere with installation of the top spar and leading edge sheeting that comes a little later.

Glue and pin in place ribs W-1 through W-3, tilting W-1 with the root rib dihedral jig. Don't glue the outer W-3 rib to the trailing edge just yet. Now glue and pin down ribs W-4 through W-7. Next, prefit and then slide in place the tapered tip portion of the bottom trailing edge. Apply glue only after it is in place..." 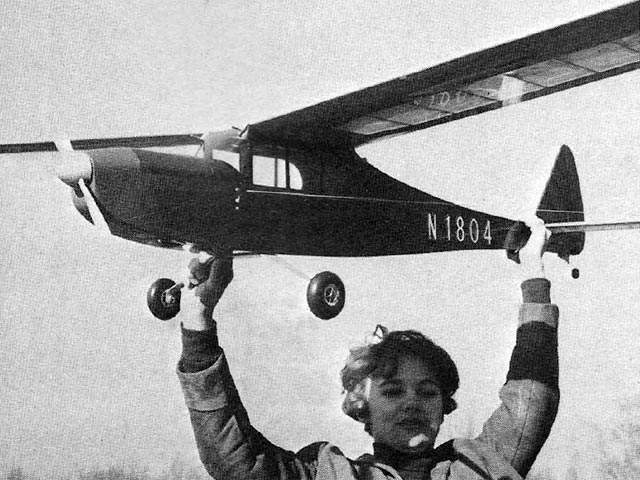 Please add Just a friendly note! The Apprentice redundantly states it is for the first-timer, beginning RCer. It is for a 1,2 or 3 Channel. No Ailerons. This being true, a Beginner would not be familiar with plans and not know the complexities of adding Ailerons if wanted.
ReKit - 04/11/2020
Your comment now forms such a note. Of course the words "Designed specifically for the beginner or newcomer to RC" were written in 1968 by the designer, and come from his article (attached). I'd say his meaning is clear. The next line details how the intended builder is a modeller with some building experience. He just means new to RC, not new to bulding, not new to plans. I don't think Bill Northrop ever 'redundantly stated' anything. Also, why try adding ailerons? Page 2 of the article explains at great length why this design does not use ailerons, and how for that exact reason it makes a better trainer.
SteveWMD - 05/11/2020
Add a comment