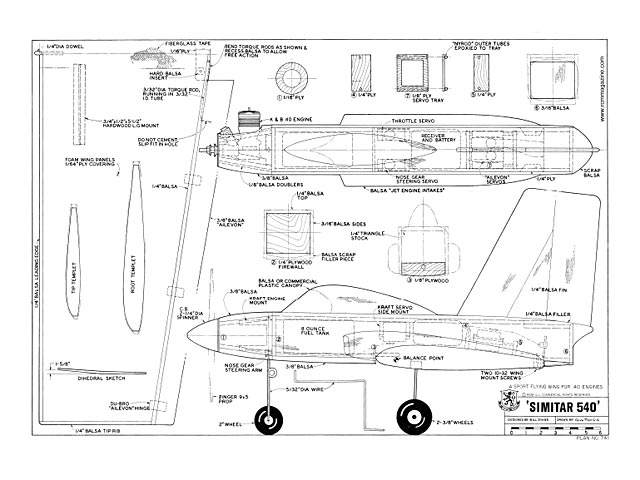 Quote: "A 50 inch .40 Powered Flying Wing That Can Tear up the Sky at Full Power, yet When Throttled Back Becomes a Very Gentle Flying Aircraft. Simitar 540, by Bill Evans

After completing the first 503 powered by a Super Tigre .23, it flew in the 1976 Tournament of Champions in Las Vegas as a part of the in-between rounds, demonstration flying. The second 503 was powered by a K&B front rotor .40. Taking the 503 lines we began to design a fiberglass fuselage that would incorporate the 503 design plus a larger canopy, simulated air intakes, a jet-like exhaust and removable cowl.

Patiently we waited for the wooden plug to be carved, the molds to be crafted and, finally, the first 540 fuselage came out of the mold. It was only a matter of days before the completed ship took form around the new fuselage. I'll be the first to admit that my knees were weak as it lifted into the air. With a K & B .40 at full power, it flies at 90 mph plus; throttled back at 40 mph its a piece of cake. Response to control commands is instant. It performs tight loops, turns very tight, rolls instantly, inverts very well, will four point roll as well as vertical roll out of sight. Landing can easily be stretched; I particularly like to pull an inside loop just before touch-down on a dead stick landing.

One morning, late in March, I test flew five new Simitar 540's each one performed without a hitch, and handed the transmitter over to the owners to land. Though shown with a four channel set-up, the 540 can be flown two channel (to operate the elevons which are a mixture of elevators and ailerons).

For a real hot set-up. we have flown a few 540's with the K & B rear rotor and without landing gear. These are pushing speeds close to 200 mph.

As you may wonder, the designation 540 comes from the combination of its 50 in span and engine size .40 - therefore '540'. Which, incidentally, is also the wing area. Using four channels, two to operate the elevons, one for engine throttle and a fourth for the steerable nose wheel, the weight will come out between 4-1/4 to 4-3/4 pounds. So the wing loading is about 20 ounces per square foot. The one special note about building has to do with the landing gear placement. Set the gear in place per the plans and make sure that the wing sets with about 3/16" of positive with relation to the ground. This is to make for easy take-offs.

Simitar 540 construction is very quick and has been kept simple. The use of a sheeted foam core gives tremendous strength. In a way, a sheeted foam wing is much like a piece of case hardened steel - that is, the outside skin provides a fairly hard protective shield for the more soft inner core which serves as a shock absorber.

The fuselage, built on a flat surface, utilizes the technique of box construction with triangular stock in the corners which produces rounded and streamline results. Glue and pin the 1/4 in balsa leading and trailing edges to wing cores; make sure to keep the leading and trailing edges free of curves or bends; set these aside to dry. (A white glue is very satisfactory for this purpose.) 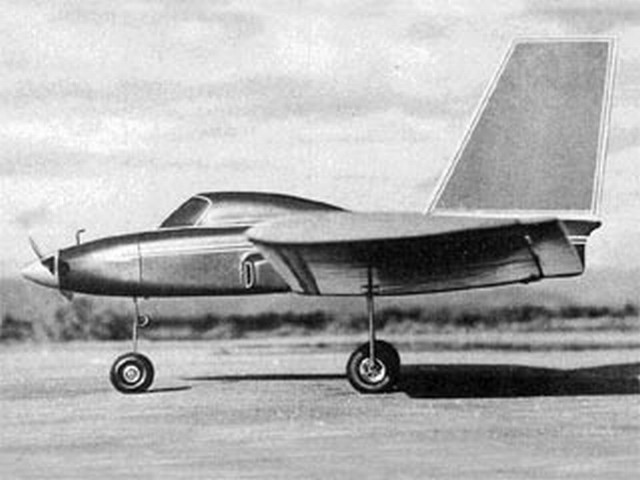