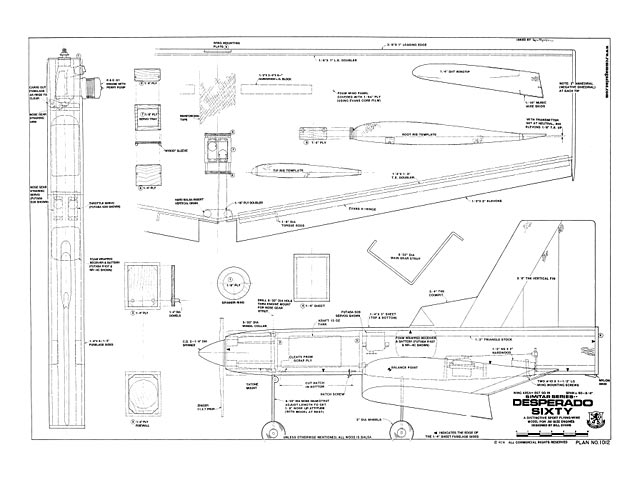 Note the Desperado 60 and Desperado 3000 both appeared together in the same article, in March 1988 RCM.

Quote: "The Desperado Sixty is something to experience. Looks great, builds easy and performs. The Three Thousand is a floater on landing, it sets down like a hang glider. You'll enjoy them both. By Bill Evans.

Among the Twenty-First Century Simitar Series, I have a group of Variants called the Cowboys. The Desperado is one of the three, the other two are the Top Gun and the Shooter.

Appearance is the key feature of the Desperado. Its large fin, swept tip plates, stepped down spinner fit to fuselage, and supersonic cut of the canopy, all make it unique. The crowning touch is the almost 2 in of anhedral in the wing. Written in the pages of aviation theory is that an aircraft of the low wing type with anhedral will have a great tendency to go into, and remain in, a spiral turn once a wing tip is down: Sounds like it makes sense. However, this condition does not apply to the Desperado; it flies through turns like water through a hose. Why? Perhaps it's because, with anhedral, it's merely like flying inverted when it's right side up. Sounds good, or better yet maybe it's because the Desperado hasn't read the theory books.

In spite of its appearance, the Desperado has all of the flight advantages of all of the previous Variants of the Simitar (oz10187) Series. First, it will not stall and, second, the speed range is from 20 mph to all the power you can give it; yes, even 180 mph plus. Finally, it is directionally stable; that is, the ship will hold its attitude until given control command to change.

A forty size Desperado, which appeared as a construction article in the April 1984 issue of Model Aviation, proved the design and served as the test bed for development of the Sixty and Three Thousand. Though hundreds of the forty size have been built, all reports are positive.

Specifications for the Sixty are: span 60 in; wing area 820 sq in; average weight 7-1/2 lbs; and the wing loading is near 21 oz/sq ft. Any good sixty starting with the K & B .61 will do the job well. A rear exhaust ABC .60 will deliver outrageous vertical performance... " 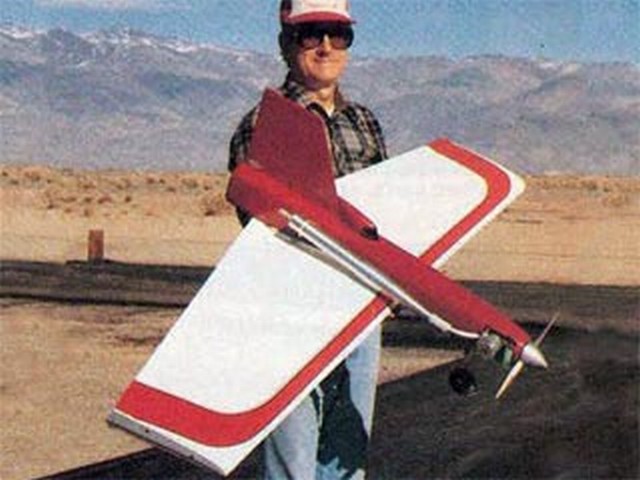