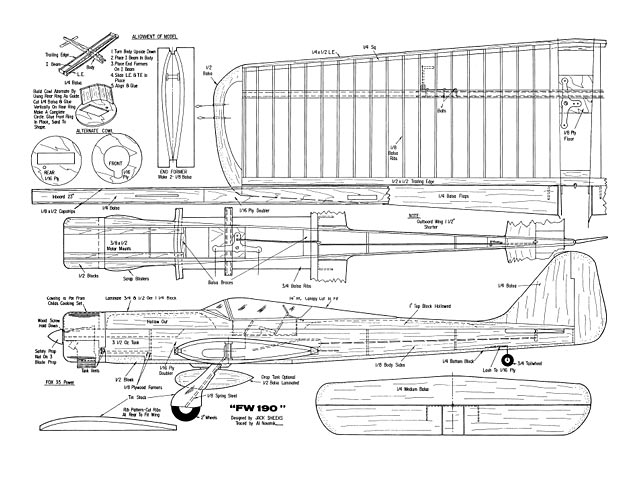 The Focke Wulf Fw 190 was one of the most successful aircraft to emerge from the second World War. It was designed by the Technical Director of the Focice Wulf factory, Kurt Tank. It was first flown on June 1, 1939. After only five flights it was turned over to the Luftwaffe for service trials. The wide track undercarriage eliminated one of the weaknesses most noticable in the ME 109.

Despite the lack of forward visibility which was to prove fatal to inexperien,ced pilots later on the Luftwaffe pilots were extremely impressed with the nimble new fighter. The ship displayed superb handling qualities, controls were well balanced, plus a brisk acceleration. The design itself was a masterpiece of ingenuity. Marrying a bulky radial engine with a slim airframe without all the fat roundness of other designs. And it worked out beautifully. This ship not only performed well, but it looked impressive and able.

In July 1941 the Fw 190A-1 and A-2s were issued to the famous Adolf Galland's JG26 squadron. Right away this helped to return air superiority to the Luftwaffe, for the FW 190 was superior to the Spitfire V in many ways. It had a 10 to 20 mph speed advantage and could out-turn the Spitfire V. The kill ratio soon reached 2 to 1 in favor of the FW, thus the Allies nicknamed it the 'Butcher Bird'.

One hundred of the FW 190A-8 models were supplied to the Turkish Air Force, This gave them a chance to valuate the craft against the Spitfire Vb, For they had both fighters operating in their Air Force, The Turks preferred an FW over the Spit two to one.

The FW was so versatile that it was used as a fighter-bomber, a rocket launcher and believe it or not, as a Torpedo Bomber. The FW 190 was a fine warplane, and lends itself well to a semi-scale stunt model.

For many moons I had been interested in semi-scale stunters and had always liked the lines of the FW, but a radial cowl airplane has too much blunt nose area, I kept telling myself. This was my feeling until I saw a Zero flown by an old club mate of mine, Charlie Serie. The bluntness didn't bother that one. He won quite a few contests with it. Charlie liked his so well he's building a new one now, as the original clobbered.

To shorten a long story, I came across an old airframe that had long since been forgotten. A bare frame with an I-beam hanging in it What to do with it, that was the question. After sketching three or four different planes around the frame I decided to cut into it and try a Focke Wulf, Out came my butcher (slightly knicked and bent) knife and the chips flew. As they flew I kept wondering if the plane would fly as well as the chips when I finished it.

As the ship started to take form, I became more and more enthusiastic, as it looked as if it might turn out to be a good one. The weight was fine, not too heavy..." 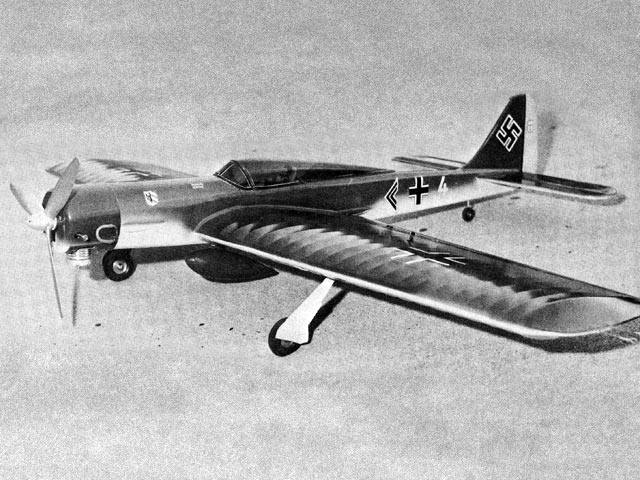