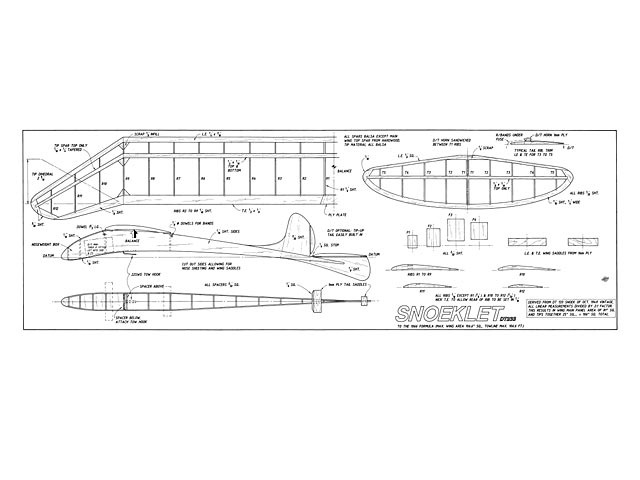 Back in the forties, I had a lot of trouble with my schoolwork (who didn't?) but long-range hindsight seems to offer an explanation, if not an excuse - I started building my own model aircraft designs at age 14, and thereafter, aeromodelling mania only got worse! My old notes remind me that each year, until I could leave school and join the RAF, had seen around thirty new projects, many not particularly noteworthy but nonetheless time-consuming. Those designs taken over by Aeromodeller were the better ones (naturally!) and numbered four during what you could call my 'schoolboy-designer' period - Cobra (oz4164), glider published 5/49; Rebel (oz7342), power pub. 1/50; and two more gliders Leprechaun (oz3252) (3/50) and Snark (oz3486) (4/52). Snoek came between Leprechaun and Snark, was designed in 1949 and indeed was the forerunner, as an Open Glider, of the A2 Snark. This similarity led to the Editor of the Aeromodeller at that time preferring to publish the slightly smaller A2. Snoek drawings were passed by AM to Frank Zaic, and appeared as a small three-view sketch in one of Frank's famous Yearbooks at a later date.

Snoek was a Lift and Drag experiment which seemed (and still seems) to work - 'Lifting' fuselage, and a wing with highly sweptback tips, the latter to reduce the dihedral requirement and to reduce Induced Drag. Aerodynamics experts have at last caught up on a schoolboy's inspiration - Swept-back wingtips reduce what the boffins now call DDL (drag due lift) what we always called Induced Drag (If you don't believe this please see the very latest Free Flight Forum report - suffice it to say, my 50-year-old wingshape flies just fine!). Theory, of course, is all very well and I would be the first to agree that practice is what wins competitions. Snoek was flown originally in the 300ft towline era, and was capable of producing 8pm still conditions of 4 minutes from this launch height (? if we can ever be sure of the air!). When its owner took it into the RAF in '49, and flew it in '50, Snoek became an RAFMAA competition winner and record holder.

Built again in 1998, it came third in the SAM 1066 European Championships in the Large Vintage Glider event, having qualified by three maxes in the rain. This year (1999) Snoek won the Vintage Glider 'Geoff Dunmore Cup' at SAM's Festival of Free Flight in June - only one problem, it headed for the cornfields in the fly-off - so I'll have to build another one!

Snoeklet is the miniature version to meet the new SAM1066 formula, which limits wing area to 106.6 sq in and line length to just 106.6 feet. This event is flown from a Hi-start or light bungee, and is great fun. Snoeklet was derived by reducing all Snoek linear measurements by a factor of 2.1.

Construction. They always say that construction of this aircraft is straight forward, but With Snoek it really is!

Fuselage. When building the fuselage sides on the plan, fit the slanted zig-zag spacers as well as the normal spacers and allow plenty of time to set before lifting from the building-board. Only this way will you stop the Forth Bridge springing straight again and spoiling the planned decolage (the wing and tail incidence relationship).

Wings: Tip sweepback reduces the overall dihedral requirement, so the main wing panels are level. Be generous with the glue when attaching the tip panels, and arrange slight washout only on the outside of your turn direction. Which way to glide turn is still your choice, even when you know that low pressure (rising air) goes clock-wise when viewed from below in the Northern Hemisphere..." 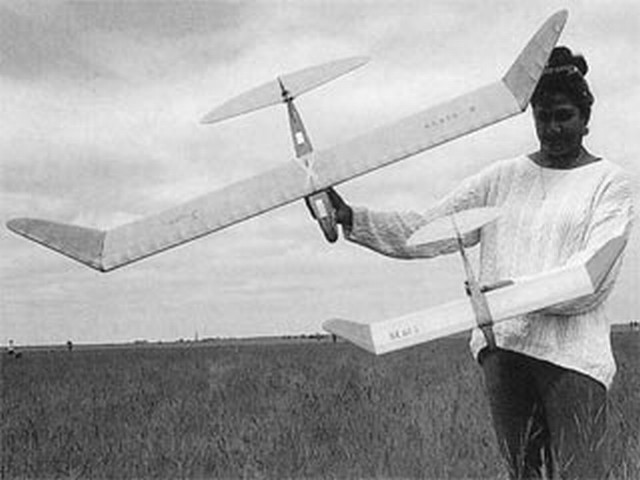