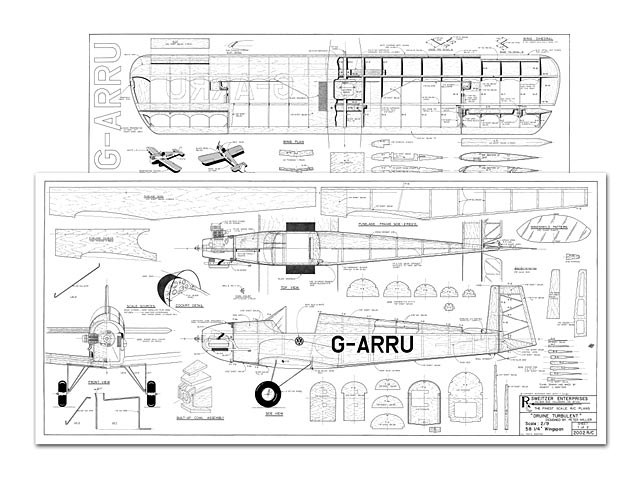 Quote: "All these (and more) acquired from a recent swap meet, free to a good home. Making 'home' the world at large I guess. Dave"

Note this plan also appeared in Aug 1984 Scale R/C Modeler. But that print seems to be a teaser, at reduced scale and with incomplete templates obscured by text.

Quote: "A scratchbuilder's version of this perky little French homebuilt. It is almost quarter-scale. Druine Turbulent, by Peter Miller.

The Druine Turbulent was designed by Frenchman Roger Druine, just after the war. The exact year is uncertain but a Turbulent built by a Monsieur Clochez took 2,000 hours and was winning cups in 1953. This would indicate initial design in the late '40s.

The Turbulent has a very special place in British homebuilt history. It was the first foreign design approved for homebuilding in the UK, and also the first postwar design so approved. British home-builders have always had an uphill struggle against the authorities. Fortunately, the Popular Flying Association has gained sufficient strength and respect over the years and the situation is very much better now. At the recent PFA Rally at Cranfield (Britain's equivalent to Oshkosh) there were almost 1,000 aircraft, many of them homebuilts or vintage machines. Surprisingly, in view of the popularity of the Turbulent, I only saw two at the Rally.

The construction of the basic Turbulent is very similar to a model, being all wood, with ply and fabric covering, The variations on the basic theme are enormous. The cowls vary, the rudder may be all moving, or there may be a fixed fin; the fin may simply rise straight from the stabilizer, or it may be faired into the stab. Early Turbulents had a stringered turtledeck aft of the cockpit, but this seems to have been replaced with ply covering. Some Turbulents have cockpit canopies, but most are open cockpit jobs. There are Turbulents flying all over the world now and, if any other version is to be modeled, the best answer is to find the nearest one and work from that.

There was a tandem two-seater called the 'Turbi' but, for some reason, this design never caught on in the same way as its smaller sister.

Let's take a close look at the size and performance of this little aircraft. It has a 21-foot, 7-inch span, and is 17 feet, 3 inches long. It has a Volkswagen engine up front, and weighs 342 pounds empty. It has a cruising speed of 100 mph, and a flat-out level speed of 109 mph. The Turbulent has a takeoff speed of 28 mph, with an initial rate of climb of 450 feet per minute and a stalling speed of 25 mph. The very low stalling speed and the safe flying characteristics are due, in no small way, to the slots on the wings and the slotted ailerons.

I have seen a display put on by four Turbulents, which started with them all tied together doing formation turns, etc, and was followed by dropping toilet paper. As they unrolled, the Turbulents then tried to cut the streamers on the way down which involved some very tight turns and close flying.

I can find no reference to any permit for aerobatics, so stunts are almost certainly not allowed - although the aircraft must be capable of loops, rolls, and stall turns (even if only unofficially).

The keen eyed and, for that matter the half blind, will see that there are variations between the photos of the full-size Turbulent and my model. The explanation is simple, I was working from the only three-views available, and had already got to the stage of covering the model before I visited the PFA Rally. As I was in the process of setting up my own business, I was short of time and so decided to finish the model as it was and to correct the plans later. The only deviations are the stringered turtledeck, and the shorter wing slots and the fin shape. The plans are corrected, and any extra details are available from the photos.

I am basically a lazy modeler so I like simple designs, and that is why I normally choose all-wood homebuilts. I like a slow flying model that has to be flown through maneuvers, possibly the rather rough grass strips I fly from have something to do with this. I am extremely fond of four-cycle engines. They suit my style of flying, and they are not as lacking in power as modelers who have never tried one often think. Just watch my 7-pound Pilot Citabria do aerobatics on an OS FS6O. However, for my type of model, lightness is essential. It is flying on the wing, not the engine. The Turbulent may seem big for a .40 four-cycle engine but, in fact, the power is very near to scale, and so is the sound. There is no big dustbin of a muffler to show, either..." 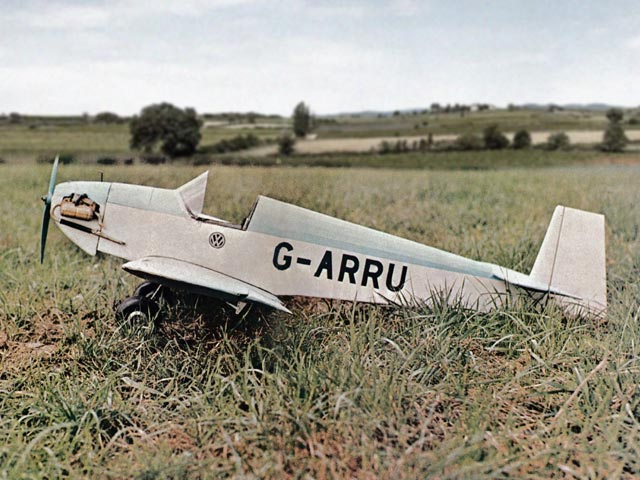 I was the owner of G-ARRU in the mid 80's.Bought for 5000 quid and sold for 6000 quid. I flew about 250 hours whilst hour building out of Bodmin Airfield. Rebuilt the engine and replaced the prop after she was tipped on her nose during a start. I sold her to a guy from London who I believe was the last owner who crashed and never repaired her. I delivered her to Popham and was saddened when I heard of the crash. I have no license now but would like to renew with a LAPL and get a Turbi as I always wanted to share my flying with someone. Fondest memories were flying below the cliff levels in North Cornwall and looking up at the cliff walkers, landing at Davis tow moor and Truro and Lands end, flying over Lundy. Happy carefree fear-free days.
Pete - 12/04/2021
Pete, G-ARRU is (believe it or not) actually all back together and re-built. My late father spent his last years rebuilding her under the watchful eye of an LFA inspector. I actually painted it. Since my father's death it is sat in his shed up in Rugby, am unsure what will happen to it but it was at the "test flight" stage. It was actually left to me but I declined as am 6ft 4 and the weight aspect would have been marginal and besides I prefer flying gliders!
Chris Huck - 18/06/2021
Do you still have G-ARRU. Is it complete? Does it have the original airframe and engine logs? I would love to own her again. Please e-mail me.
Peter Buchan - 12/01/2022
Add a comment