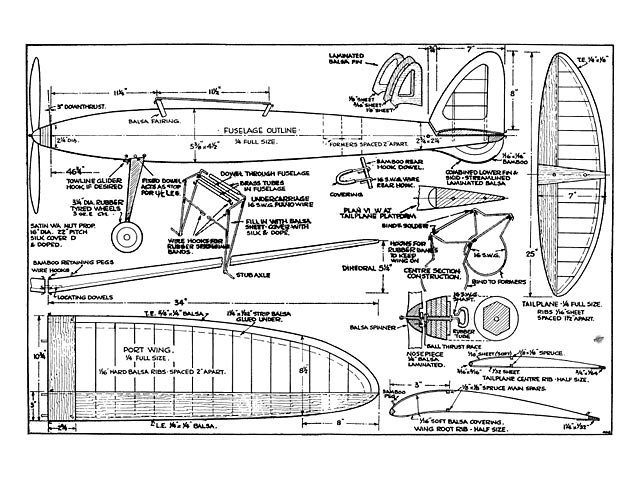 THIS article is about a large monocoque rubber-driven model that has proved itself a very satisfactory flying model, and also an excellent towline glider with certain slight alterations.

Now that we petrol fiends cannot fly petrol models, there is the added incentive to build rubber models and fly them when the occasion permits. Actually I have always built rubber models in between my many petrol ventures, and in the early days I used to indulge quite a lot in competition work with duration rubber models, including biplanes, sea-planes and entries in the exciting SMAE speed competitions.

Now that the war has made most of us pack up our workshops and tools, we mostly have to resort to building at odd moments wherever we happen to be, and armed with only the most simple of tools.

The model I am about to describe was constructed with a very simple outfit, and shows that one can construct a large streamline rubber model, armed with few old razor blades, a knife, a pair of pliers, some sand-paper and thread, and a small pocket soldering outfit and a few odds and ends. With this outfit I first built a Wakefield size streamliner, but of course the old petrol urge soon got me, and in a fit of repression I felt I must get down to a sizey model more in keeping with petrol ambitions. So out came the roll of kitchen paper, and very soon I had a drawing of a large streamline model that just asked to he built.

To my mind there is something delightful and impressive about the steady flying of a large model that no small model ever approaches. The only thing I was rather worried about and that decided me to keep the size to certain limits was the fact that I wanted to have no gears. A single-skein motor had to suffice.

I therefore kept the fuselage overall length down to 4 ft because a single-skein motor is liable to flap about if much longer. I was not after any great duration, but I felt I would be satisfied with steady pleasurable and reliable flights of about 3/4 min.

In actual fact the flying capabilities of the finished model have been considerably above expectations. The glide is delightful as is generally the case with large streamline models. The model is most impressive in the air, due to its size and due to the glistening streamlined varnished fuselage. It has exceptionally sound landing capabilities after a stable and flat soaring type of glide.

Those of you who have indulged in large streamlined gliders will have experienced the excellent soaring and float-ing capabilities of this type, provided there is ample wing surface and the whole model is kept of really clean aerodynamic form, and with wing surfaces flying at fairly low angles of incidence. To soar well a large model requires reasonable weight and should possess considerable speed. These facts have been proved by the Albatross and similar soaring birds.

The matter of size and weight has been well illustrated in the past by the German model gliders with their large wing span up to about 11 ft and weighing several pounds. I obtained one of these German gliders a few years ago and was most struck by its beautiful soaring capabilities. It was constructed of hardwood and three-ply, and was covered with silk and much paint. That gave it a high finish. It has a gigantic brass weight at the nose to give it momentum. After my experiences with large heavy petrol models and this German glider I produced a large glider of my own and had a great deal of fun with soaring flights after tow-line launches.

I always remember Mr Galloway's huge 12 ft span rubber-driven model that used to fly so well in 1933 on Wimbledon Common and Fairey's aerodrome, although it was only a slabsider and no great care was taken to streamline it. Mr Galloway used multi-gears to keep his rubber length down.

It will be observed that the fuselage is of complete streamline form and yet is kept sufficiently large at nose and tail to ensure free operation of the rubber motor which has 16 strands of medium thick plated 1/4 in rubber and which drives a satin walnut propeller of 16 in diameter and 22 in pitch.

The cantilever and sprung undercarriage legs and the parasol centre section struts are led from the fuselage at suitable and favourable angles to ensure the minimum of interference of airflow over the streamlined fuselage.

The monocoque construction of the fuselage is very strong, but quite light. It is fully planked with balsa planks to withstand rough handling. Fig. 3 shows the backbone which is cut from1/2 in balsa sheet, and the half oval formers of 1/8 in balsa sheet are glued first to one side of the backbone, and the planks of soft 1/2 by 1/16 balsa are glued side by side to these half oval formers. The half oval formers are spaced every 2 in. A thin film of glue is smeared between the edges of the planks. The planks are kept in position whilst drying by ordinary household pins. The planks are tapered towards nose and tail where necessary.

When one side has been completed the opposite half oval formers are glued to the other side of the backbone. This side is then planked (see Fig. 4 and observe the pins). When all the planks are in position the whole fuselage is very carefully rubbed down with glasspaper. A covering of fine bamboo paper is then stuck on to the fuselage with plenty of photo paste as an adhesive... "

Note this is not a full size plan, This is a scan of the drawing as printed across two pages of Dec 1941 Aeromodeller. General layout is shown at 1/4 scale. Ribs at 1/2 scale. Proppellor block is shown fullsize.

Plan and article extracted from https://rclibrary.co.uk/title_details.asp?ID=2193 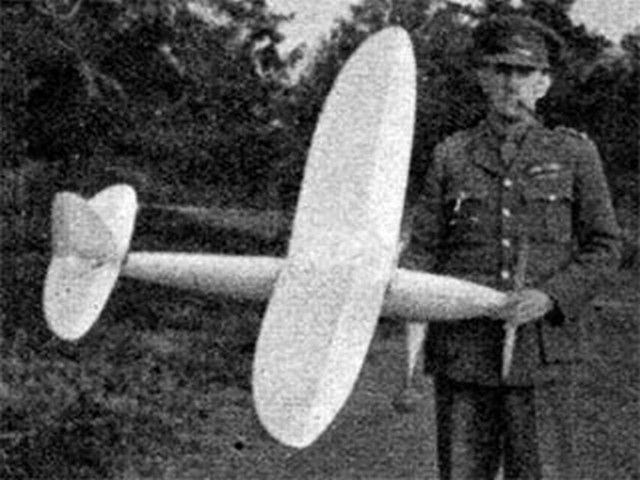