The Boomer was designed for the modeler who doesn't like profiles, because they all look alike. When the Boomer starts through its aerobatic paces it looks realistic enough so that you forget that it's a profile. During World War II, the Germans called the P-38 the forked tail devil (or however -you say it in German). It was easy to identify because of the unique design. In other words, it was different. So it is with the Boomer. It stands out in a group of conventional airplanes.

Not only is the Boomer different, it is also modern, with swept tails and all around jet styling (after all it is a 1968 model). In order to be a jet it has to have an air intake, so I took a standard 2 in Merco spinner and sawed off the nose. Presto! An air scoop! Smooth out the edges of the opening by mounting the spinner on a 1/4 in dia bolt and inserting it into the chuck of an electric drill. Turn on the drill and hold a piece of sandpaper against the cut off section. If you don't own an electric drill, mount the spinner on your engine and fire it up. Watch the prop and count your fingers after the operation. (Blunt end spinners are preferred for safety, so check your AMA rules on this. the editor.)

There is not much more that can be said about the model, the photos tell the story, construction is standard, and performance-wise it will hold its own against any of the top stunters.

Start constructing a Boomer now! Be the first kid on your block to have one! Begin with the wing first. Trace the inboard wing tip at section A-A, turn over tracing and tape to section A-A on the outboard tip, Cut main spars from 1/4 in sheet and join at center. Use a 1/8 doubler or fabric for extra strength at this point. Cut all ribs from sheet and make cut out for landing gears on six of these ribs.

ut the trailing edges from 1/4 in sheet, join together and pin to plans. Prop up main spar 1/4 in from plans and glue all ribs in position, making sure that you have three ribs with landing gear cut-outs on each side of the center..." 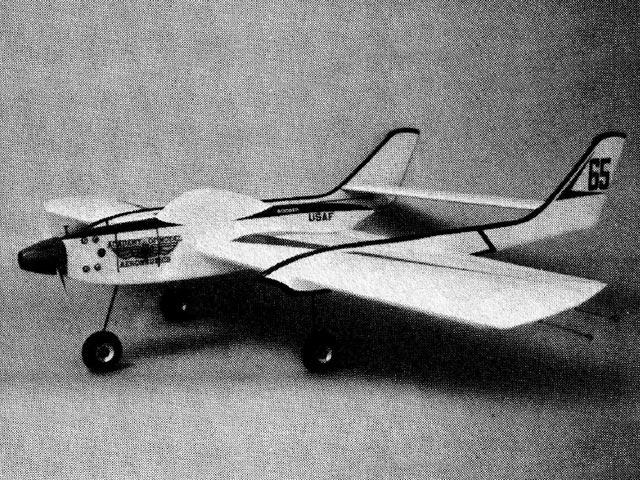