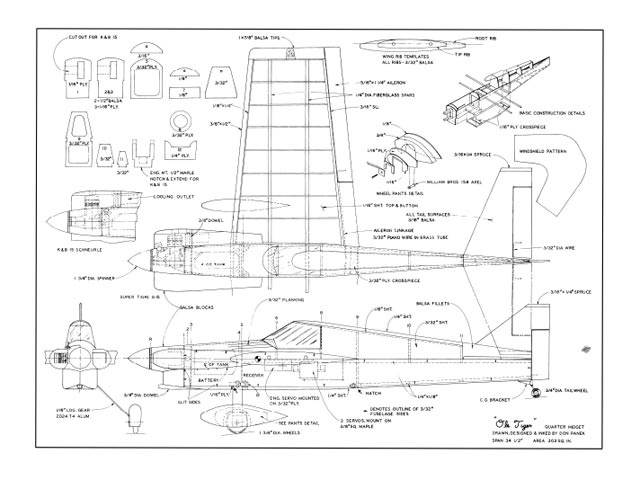 Having the desire to race and compete is an instinct born in every individual and almost every modeler who has ever watched Formula I or FAI contest. I personally started with an interest in Formula I, but as the years passed by, the event overwhelmed me due to the great amount of time and money re-quired to compete on a near or equal basis.

Recently, the Quarter Midget event has come into its own, and with it a chance for everyone to compete in a racing event without the necessity of de-voting all of his resources to only one phase of this great hobby.

Club contest schedules are now in-cluding the Quarter Midget event across the country and if you're looking for a model capable of competing success-fully, plus a sleek appearance, Ole Tiger is for you.

The design meets all existing rules plus those presented to the AMA contest board, which were outlined at the Toledo (Ohio) Quarter Midget meeting in February. Construction has been simplified by using a unique wing design concept utilizing two fiberglass arrow shafts for both structural strength and as the wing building jig. The credit for this concept goes to Don Dombrowski, owner of the House of Balsa, 2814 E. 56th Way, Long Beach, Calif. 90805, who offers the wing kit, complete with shafts, sheeting, die-cut ribs and formed wire aileron linkage for $11.95.

Construction. I personally like to cut all parts out prior to beginning a project. Once com-pleted, the fun of assembling begins. The wing ribs are made by stacking nine pieces of 3/32 balsa cut to lengths noted on plans, placing them between a root and tip 1/16 plywood rib template. Drill the two 1/4 dia. holes, bolt the stack together and sand to shape. Repeat for the other side of the wing by reversing the tip and root template. Be sure to mark ribs with a felt tip or ball point pen to denote top and front to avoid confusion during assembly.

Two engine installations are shown, one for the Supertigre 15, and the other for the new K&B 15 rear rotor. If you plan to use the K&B 15, cut the engine mount to the longer configuration and notch out the section noted to clear the rear of the engine case. At this time, drill mounting holes, using plans for proper placement of engine. Sheet metal screws or blind nuts can be used to hold engine in place. The firewall assembly, consisting of bulkheads 1, 2 and 3, is cut out to the shape noted. Epoxy together with the engine mount in place. The mount will align the assembly, but make sure mount is at right angles to firewall surface, to assure a zero thrust line... " 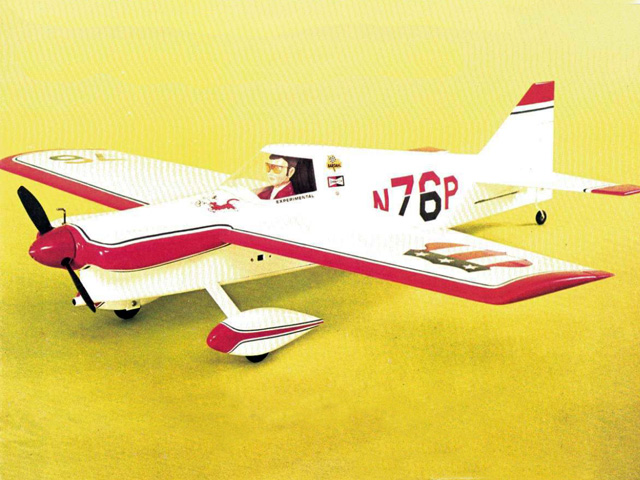