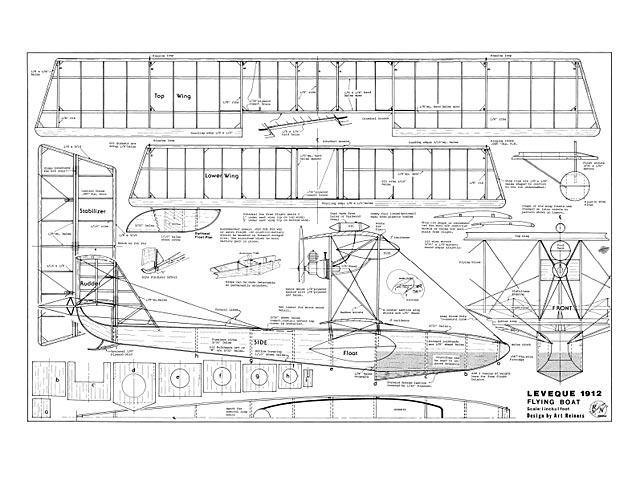 Note photo of completed model was found online at https://www.rcgroups.com/forums/showthread.php?1123393-1912-Donnet-Leveque-biplane-kitbash

Update 10/03/2020: Added both printwood scan and kit instructions, thanks to MikeB.

Quote: "Hey Steve, My buddy Bob C sent me these scanned print wood files so I could build one of the Leveque Flying Boats. It just so happened that I noticed these would go well with the plans you have offered on the website??... This looks like a fun build and I might just copy everything into CAD so I can laser cut the parts. In that event I'll send the nested parts file. Appreciate all you're doing!"

Quote: "THE LEVEQUE FLYING BOAT. INTRODUCTION: The LEVEQUE Flying Boat was the forerunner of the Franco-British flying boats used extensively by the allied forces during WWI and after the war by many countries in Europe. Designed by F Denhaut; the original design made it's first flight in April 1912.

The model is an example of the modified version of that aircraft. There were several modifications made to the wing tip floats, tail mount design, and wing. It was re-designated the Donnet-Leveque Type A.

The aircraft was powered by 50 hp, 7 cylinder Gnome-Rhone rotary engine. Top speed was 68 mph at a takeoff weight of 1,300 pounds. The hull was mahogany covered; the wings and tail were covered with oiled linen.

CONSTRUCTION: FUSELAGE: Lay out all fuselage parts to become familiar with material and location. Note that the rear bulkheads are 3/32 balsa as against 1/8 balsa for the front. The location of the wing struts is important to the proper wing alignment so proceed carefully in installing the aluminum tubes for the detachable struts. The wing can be permanantly attached if desired by epoxy gluing the struts in place. We recommend permenantly attaching the wing for free flight models to reduce the overall weight. The tubes should extend the full depth of the fuselage and the struts should be 7 in for the rear struts and 7-5/8 in for the front struts.

This model can be converted to small R/C. The forward sections of the fuselage can be filled with Styrofoam block to provide an area to house the batteries, receiver and servo units. Cut-outs are easily made in the foam to locate equipment. Weights are added full forward for free flight only.

The upswept rear section of the fuselage is simple to construct and is added to the fuselage at former I, a 1/4 in balsa plug. Note that the rudder post extends into former I. The tail controls can be made functional for R/C or scale free flightby the use of small plastic strips or hinges. Hinge points are indicated on the plan.

Begin construction by marking off all bulkhead positions on the two fuselage halves and then giving all bulkheads and fuselage parts 2 coats of clear dope before assembly. Start with bulkheads I & D. Remember that as seaplanes are exposed to occassional dunking they must be well protected form water saturation. Don't spare the glue.

Check the alignment frequently while assembling the fuselage and correct any misalignment. Cover top and bottom of the fuselage with 1/16 balsa or 1/32 plywood as required. Be sure that the 4 strut anchors and foam (if used) are installed before gluing the pre-coated wood in place. Nose block is added last. Sand carefully - do not round off the edges. When the fuselage is complete, cover with silkspan and give the assembly 3 coats of clear dope, sanding carefully between each coat. Finish off with color coats of reddish-brown dope to give mahogany appearance. Be sure all wire fittings are in place before final finish.

WING & TAIL: Lay out the tail parts directly on the plan and glue together. Hinge if desired. If the hinges are not used glue the 1/8 strips together to form a 1/4 in strip. Carefully sand all tail frames and cover with tissue. Clear dope all parts. Make tail struts from 1/16 x 1/8 hard balsa strip. Tail skid is made of scrap plywood. Wire control horns are optional for scale appearance. Glue rudder and stabilizer into place and add tail struts. Use care in alignment of tail assembly.

The wing structure is simple frame construction. 1/32 plywood is used for dihedral support. The plywood strips are glued to the 3/16 sq. Leading Edge center section only. Do the same with the Trailing Edge center section. The outer wing panels are glued to center section after completion. Set dihedral angle as shown on plan. Add wing spars after frame is complete. Carve the wing tips to match the bottom camber of wing. Note that the thicker wing ribs are at strut positions to provide more strength. The struts are all 3/32 x 1/8 hard wood except the 4 hardwood dowels used for the center section support. The wing tip struts extend completely thru the lower wing and are epoxied in place.

Cover the wing with tissue and give several coats of clear dope. Assemble wing structure by attaching the wing panels to the 4 center dowels first and adding tip struts. Align carefully. The fuel tank, oil tank and engine mount are now added followed by the bamboo struts. Be sure clear dope all parts.

Power can be provided by an .020 PEE WEE engine or electric motor. Be sure to run the engines clockwise. The wing floats are carved from solid balsa or built up as indicated on the plan. Material is provided for both types.

RIGGING: The rigging is functional and should be installed with care. The wire fittings are .047 music wire epoxied in place. The main drag wires are fastened to the fuselage and to the outer most (upper and lower) wing strut positions. These lines are made of fine steel cable or dacron U-control line. Connection is made as shown.

FLYING: The Leveque will take off from water or land with .020 glow engine power. Electric power or R/C due to extra weight may (or may not) work quite so well, however, with a good run it can be very successful. Balance should be at a point where the fuel line enters the fuel tank. GOOD FLYING." 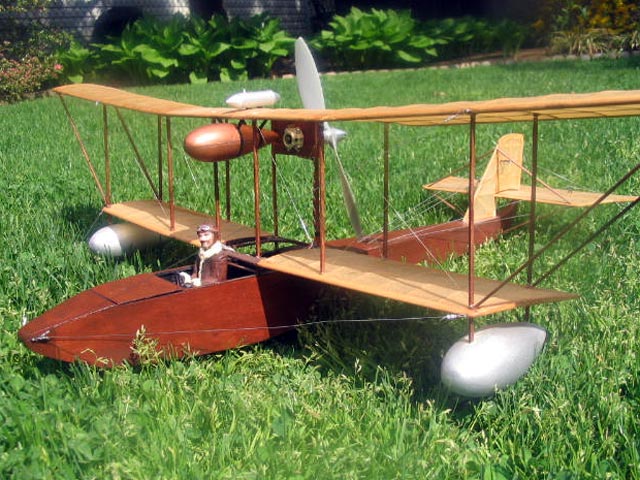