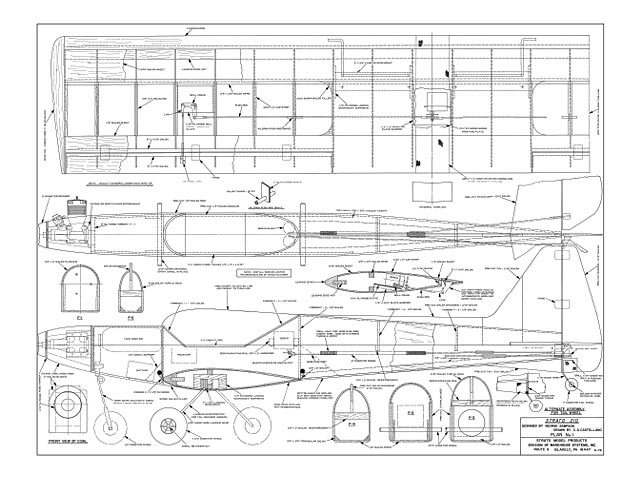 The greatest thing about this hobby of ours, in my opinion, is the rediscovery factor. For instance, just when you start feeling as though you are in a rut with your .60 powered Sport or Pattern job that looks, flies and gulps fuel the same as everyone else's .60 powered job, along comes someone with something different. Maybe something new, maybe something old with a new twist. Maybe it's a nifty little bipe that might remind you of a similar ship you flew 15 years ago with escapement and you wonder how it would be with proportional. Maybe it's a delta or a helicopter. But then maybe it's just a nice little ship that looks a little different, fits the family car a little better, and flies just as well as your present behemoth on a lot less fuel. The latter is what this article is about.

Our subject is the Strato-210 airplane by Strato Model Products of Blakely, Pennsylvania, powered by the Enya .45BB/TV engine from Model Rectifier Corporation of Edison, New Jersey, and controlled by the Kraft KP5 Sport Series radio system from Kraft Systems Inc, Vista, California. Here is a team of winners if there ever was one.

The plane comes nicely packaged in a sturdy corrugated carton. When you open the box, you find some interesting trinkets, most extraordinary of which is the huge canopy. When you spot this you immediately open the rolled plans to see how big this thing really is. A glance at the plan shows that almost half of the canopy is trimmed away and discarded and the whole thing will fit your workbench after all. Next thing you'll notice is the good quality of the balsa and plywood parts. Be careful when you pick up the die-cut sheets or you'll have wing ribs falling all over the floor - the die-cuts are really that clean and crisp. Plans are clear and although they are kept simple and uncluttered, they are completely adequate. The only change I would recommend is to show the CG location. No problem for the veteran builder but the less experienced chap would find this added detail helpful.

The kit goes together quickly, with nothing strange to trip up even the novice builder. Anyone who has built even the simplest balsa trainer can build this ship with no problem, although it is perhaps not a basic trainer. However, the builder who has progressed through the rudder, elevator, motor type trainer, and is ready to move up to full-house, would find it difficult to find a more suitable advanced trainer than this. The lines of the completed model are very clean and attrac-tive; the magazine ads and picture on the box do not do it justice. The plane can be built in either taildragger or tricycle gear configura-tion, although nose gear and brackets are not included in the kit. The rest of the hardware is there, however, and is of excellent quality.

The Enya .45 engine is a high quality, nicely finished power plant with as much power as a few .60 size engines that I have seen, and flies the Strato-210 with some power in reserve. The crankshaft is cradled in ball-bearings and, with regular care, this engine will last a long long time and give excellent service. The Enya muffler is very satisfactory, both in respect to sound damping and power loss. My engine idled right out of the box and is one of the easiest handling engines I have owned. Needle valve settings come easy and remain very stable throughout the flying session.

Kraft systems have been at the top of the heap all over the country for a good while now, and the new Sport Series is no exception to this rule. After 75 'shake-down' flights in one of my old clunkers, this system proved to be in keeping with what one would expect from Kraft. The Sport Series system sells for $299.00 and comes with four KPS-11 servos. I chose to order mine with four KPS-12 servos for a slight extra cost, which, in my opinion, is worth it. The smaller servos have as much usable power as the larger units, and you can fit them anywhere. It doesn't seem sensible for the average Sport flyer to spend $400.00 for any radio when he can get this kind of quality and reliability at this price. Obviously, the fifth channel was included with retracts in mind for it is actuated by a positive 'on/off' switch and is not proportional. The servos seem faster than those of the same size furnished with my Series 71 system and the servo cases have been beefed up for '73.' The charger for both transmitter and receiver batteries is built into the transmitter.

For finishing the model a new heat-shrink material called Kwik-Cote was used and I am quite impressed with this material. Kwik-Cote is a glossy dry adhesive film type covering with the color pigment incorporated in the adhesive. Colors are very opaque and not semi-translucent like some other supposedly opaque coverings. This material has a fail-safe system built in that can save some grief. Most other coverings melt and suddenly disappear when too much heat is applied, but this is not the case with Kwik-Cote. Instead of melting away like zap, this material loses its gloss and turns dull just before it melts, indicating too much heat is being used and gives you a chance to turn down the heat before you blow the whole job. As it comes off the roll, it is soft and supple and cuts and tears rather easily. However, after heat has been applied, the material becomes tough, but not brittle. In fact, after heating, it takes an extremely sharp instrument to trim off the excess. Working wing tips and curved nose sections is sheer delight with this covering and it has to be the best of the glossy coverings in this respect.

After studying the plans and the step by step instructions included on separate sheets, I went to work. Due to the fact that building wings is not my favorite phase of this hobby, I built the wing first to get it out of the way. It may be built either in one piece using a simple jig, or in two panels and joined at the center. I elected to build it all in one piece because I'm the type that usually builds two left hand panels and have to rip one apart and rebuild it. The wing jig takes about five minutes to build and set up properly. A key strip is fitted into a notch in the rear of the shaped leading edge. This key strip engages in notches in the front of the wing ribs. The bottom spar is fitted to the notches in the bottom of the ribs. This assembly is then pinned and glued to the trailing edge planking, which has been pinned over the plan. Once this has set and the glue has dried, provided you have lined everything up correctly, you can forget about warps. They just can't happen.

Ailerons are built in and later cut out of the trailing edge, assuring a good fit when finally installed. Hardwood landing gear blocks were installed next in the standard manner with one exception. The 3/32 plywood braces provided have two notches: one in the forward position for the taildragger mode and the rear notch is used if you prefer the tricycle gear. Next comes the planking and cap strips and the control linkages for the ailerons. The tips are pre-shaped blocks and require only a little sanding to finish..." 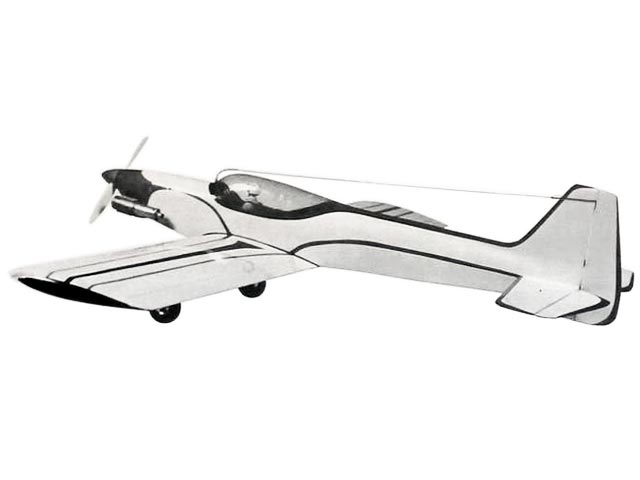