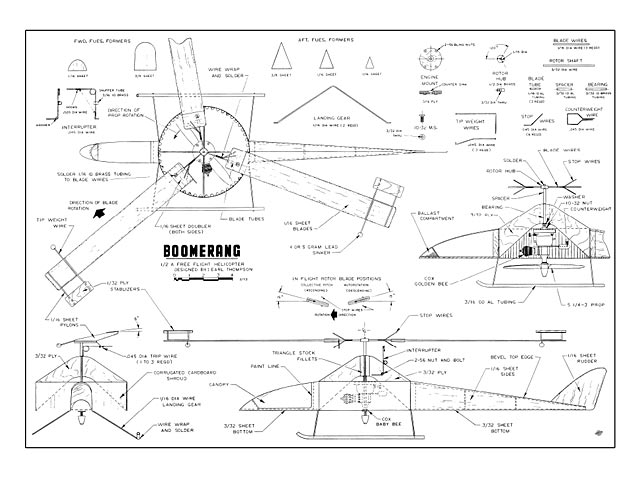 Quote: "Boomerang. A free flight chopper with some unusual twists, like controllable flight and reliable autorotation. By EA Thompson.

Hurray for the helicopter! The modeling world has turned its fancy to the rediscovery of rotary wing flying machines. The RC fraternity has firmly come to grips with this new modeling challenge by scaling down prototypes. However, the extreme cost, as well as lack of machining skill and flying proficiency, deters most of us from attempting this approach. If your interest in model helicopters is high but your funds are low, why not take a look at a rigid rotor, torque reaction free flight model?

Helicopters were flown for many years as an official event at the NATS. Unfortunately, the participation was rather limited and the event reverted to unofficial status. A general absence of published information and the lack of understanding of basic stability requirements has all but denied helicopters a large following. So here is my big chance to reinvent the wheel and put it all together with a new twist or two in Boomerang, the plagiaristic free flight helicopter.

A lightweight, profile fuselage version - called Bormer for short - placed first in the 1973 BMA Scholarship Contest. Our interest in helicopters was kindled when Marty flew a Glenn Lee design (Chopper 64) at the 1972 BMA contest, and lost it OOS on the first official flight. The flight potential and design challenge caught my attention.

Many design features of the Bormer were derived from published information by Glenn Lee and Dr Lee Taylor. However, a new innovation was devised to achieve cyclic pitch control in order to generate forward flight. Basically, it consists of a fuse-operated interrupter wire which contacts trip wires on the blade cuffs. The advancing blade is tripped as it goes by, thus causing loss of lift over a portion of its circular path. When set up to happen in a planned manner, forward flight is achieved.

Vertical ascent with collective pitch, and descent by autorotation, is con-trolled by the blade limit wires on the rotor hub. Collective pitch and auto-rotation angles of 12-150 seem to work best. When the collective pitch is increased beyond 150, the rotational speed is greatly slowed by high drag, resulting in little lift. Autorotation angles below 100 are tricky too. An excessively low angle (less than 50) will cause the model to tumble out of the sky. Under power, the tip weights provide a pitch increasing moment to the blades and, with loss of power, these weights and blade drag help pivot the blades over into autorotation. That should be enough backyard helicopter theory to get you through the 'what-makes-it-fly' questions. Before I get in deep trouble with the theory, I'll shut up and let you start building.

The construction is straightforward and should offer no real problem. Epoxy is used for all glue joints. Corrugated cardboard has been discovered to make the building of the propeller and engine shroud a snap. Get the kind that has a thin facing on one side only, and put the corrugated side inward for a smooth appearance on the outside. Cut a piece to 2 x 18-1/2 in. Trim to exact length by fitting it around any six-in diameter cylinder (a three-lb coffee can is perfect), and tape the butt joint with magic mending tape. Cut out four mast support pieces from 3/32 plywood and epoxy one on either side of the bearing tube. After curing, the remaining two are epoxied at a right angle to the first pair. Triangular balsa fillets are also epoxied on and this whole subassembly is glued into the ring, with the tape joint at the rear. A couple of coats of clear dope and sanding complete the unit.

The forward and aft fuselage sec-tions are just as easily built. Cut out bottom pieces and formers from balsa stock, as specified on the drawing. The two 3/8 sheet formers are contoured on one side, to fit the shroud, by using the coffee can as a sanding mandrel. Epoxy the formers to the bottom sheets in positions shown, and finish the inside of the forward section by covering it with colored craft paper. A canopy of your choosing is epoxied on and trimmed to final shape. Bevel the top edge of the two side sheets for a backbone joint and epoxy them to the aft fuselage section, After trimming and sanding, epoxy the rudder in place.

Notch the forward and aft bulkheads to receive the landing gear wires and epoxy them on. Glue the forward and aft fuselage assemblies to the shroud, making sure everything lines up as shown on the drawing. To avoid messing up the canopy surface, mask off the portion to be left clear. Clear dope two coats; sand and cover all bare wood with Jap tissue..." 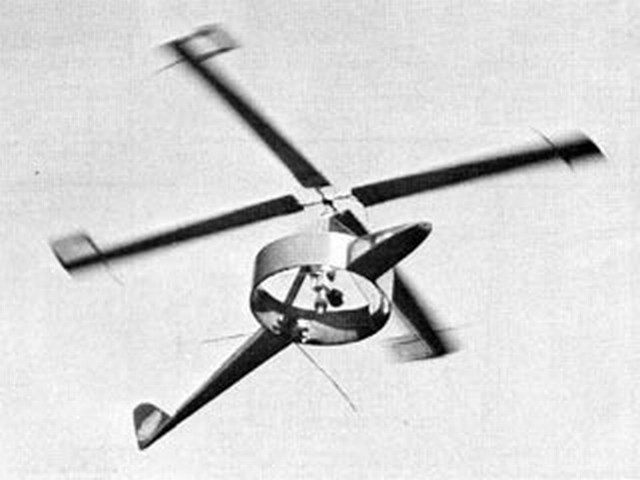