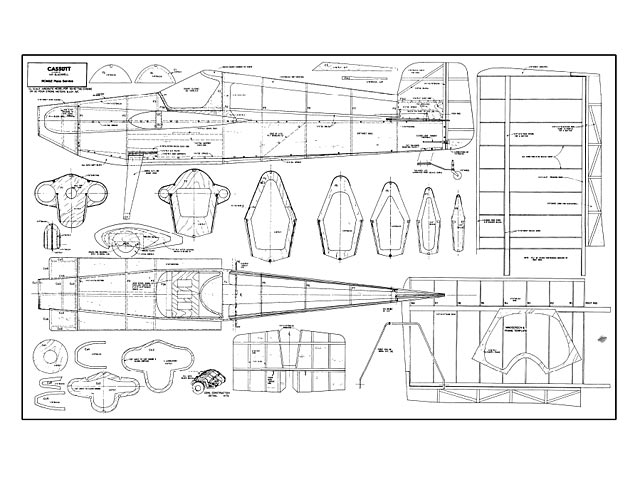 In 1954 Captain Tom Cassutt designed the Cassutt Special, a single-seat racing aircraft. Following the success of the prototype many were constructed by home builders in the US. In 1969 Airmark Ltd started to produce the Airmark Cassutt in the UK. Two derivatives were produced, the IIM and IIIM, the main differences being in the width of the fuselage and of the thickness of the wing.

Both types were powered by 85-90 hp engines, normally of the Rolls Royce Continental variety which gave a top speed of around 200mph. The fuselage, fin, rudder, tailplane and elevators were constructed of welded steel tube, the wings had built up ribs and laminated spruce main spar. The cowl is from fibreglass and metal and the whole unit was reputedly stressed to + or - 12 G.

Building your Cassutt. Nothing too complicated here, but I would expect anybody building this model to be reasonably experienced at building from plans as it is not really suitable for a second or third model. Cut out all parts and make a kit. Laminate sides and doublers and add top 1/4 in sq balsa. Attach 12 and F4 and undercarriage plate. When dry add the 1/2 x 1/2 in hard balsa servo tray mount. Next add formers F5-8 and 5/16 x 1/4 in fin post. Now add fin core (note offset) and 1/4in sq balsa spine and 1/4 in sq spruce keel. Next epoxy in F1 and D fillets. While that has been going on it will have been no hardship to build two wing panels.

When the fuselage is dry check the wing panels against the fuselage. If all is OK put the panels back on the building board and sheet the top and bottom with 1/64 ply (if you have used foam wing panels they should be fitted with spars as per the built up wing with 2-7/8 in of the spars protruding from the inboard end of each panel and 1/16 balsa tip ribs on the outboard end).

Next add the 1/2 in sheet wing tips noting that they stop 50mm short of the false TE. Back to the fin. Add two pieces of 1/4sq x 1/4in long spruce to the rear of F8, then add the 1/4 x 1/8 top and diagonal rod to the fin and finally attach FR3. Now we return to the wings. Put the aileron torque rods into the false TE and epoxy the wings into the cutouts in the fuselage making sure everything is aligned correctly. When dry, sheet in the top of the rear fuselage and the areas just to the rear of the cockpit..." 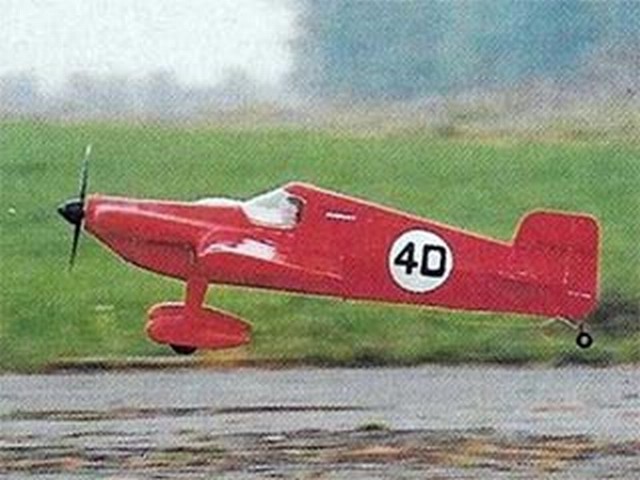