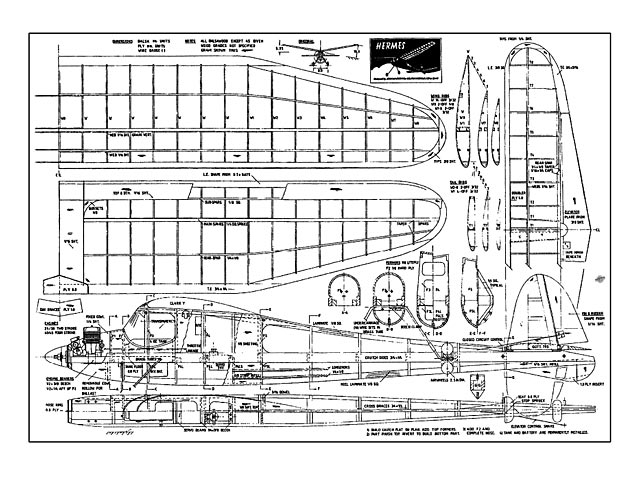 Hermes Major. Free flight power duration model. Originally from 1949, the 41 inch Halfax Hermes is here enlarged to 150% at 61.5in and presented as the "Hermes Major" in a nostalgia article from Aeromodeller 2003.

In Greek mythology, Hermes was Herald and Messenger of the gods. In this role he was frequently asked to speak in public which involved a great deal of travelling. He thus became elo-quent in speech and a protector of travellers. In other roles he was a god of gymnastic science and had some less desir-able affiliations. His father was Zeus, amongst whose duties was included an ability to change the nature of weather, bringing storms and tempests as well as blue skies and gentle winds. I think Hermes inherited many of these capabilities and clearly had a good deal to do subsequently with aeromodellers. Perhaps it was with these virtues in mind that Halfax Models Ltd of Halifax chose the name 'Hermes' for their cabin power model kit of 1949.

John Magson and Halfax Models. This vintage cabin power model of 41 in wingspan, was designed by John Magson and priced at fifteen shillings and sixpence. Hermes was advertised as 'A sleek power duration model of exceptional design and contest performance' suitable for all types of motor around the 1.0 to 1.5 cc class. In fact, the plan depicted the Mills 0.75 and the ED Bee engine installations. Indeed cabin models were fast approaching the end of a period when they could be regarded as possessing competition performance, a role subsequently filled by Halfax with their Javelin and Rapier designs.

However, Hermes had features that suited it to good performance such as its large tailplane and sleek fuselage lines built on the crutch principle. The raised cabin profile had some resemblance to a modest pylon, supporting the straight dihedral wing of Clark Y section. Clearly, John Magson was a modeller of some discernment and experience, and the kit plan by Arthur Collinson was drawn with clarity and precision.

In many respects, the Hermes was a very attractive design without the box-like features or weaknesses of some of its contemporaries. I chose to build it as my first venture into power flying in about 1950, using a Mills 1.3 with which it had a fast and safe rate of climb and a respectable gliding performance. So much so that it escaped on its third flight without a name upon it and I was lucky to recover it through the police a week later. Lesson learned..."

Update 05/06/2018: Rescaled this plan to fullsize at 61.5in wingspan, and retitled the listing as Hermes Major. 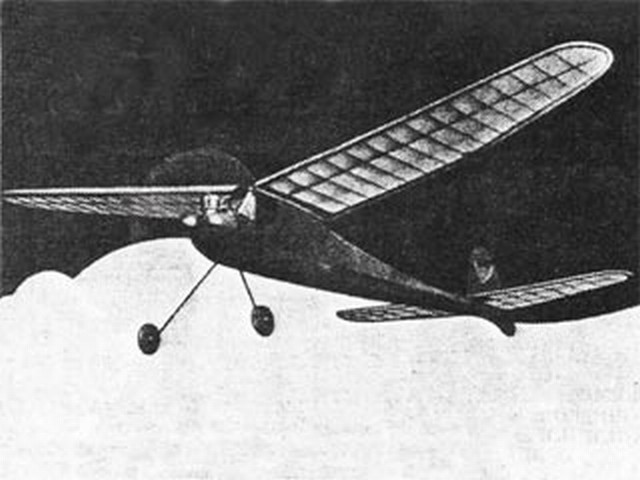