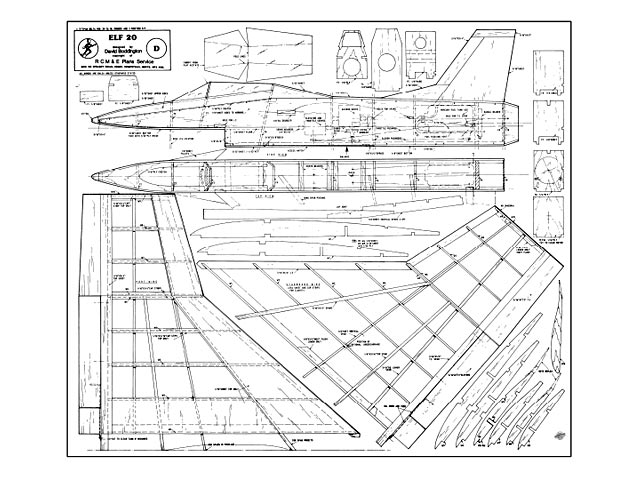 Quote: "ELF-20 European Light Fighter. Get into the action with this jet-style delta model for .20 engines - or electric - and three channel radio. Designed by David Boddington.

Born as a CO2-powered free flight model Elf (oz3825) in Aeromodeller in 1985, the Experimental Light Fighter has developed through a .049-powered version Elf-16 (oz10032) in RCM&E in 1986, to the present design. As soon as I had flown the little Cox-engined Elf 16 I knew that a larger version had to be developed; the smaller version had such delightful flying qualities, a bigger brother was a natural.

By keeping to a .20 size model the original style of construction is maintained, giving an economic airframe of a size that allows easy transportation without having to worry about dismantling. The additional fuselage space, compared with the Elf 16, means that standard size radio equipment can be fitted without having to resort to a shoe horn. For owners of radio equipment with built-in mixer control then, each elevon can be connected to a separate servo. If you have even more sophisticated radio such as the Powermax Merlin, it is also possible to use the two servo system to give flap effect, for landing, while retaining the elevon control. You only have a basic four or even two function outfit? No problems! Use a mechanical mixer for the elevon control and for two-function, forget about throttle control.

At the end of the Elf 16 (.049-powered) article I suggested that the design should be a good candidate for conversion to electric power. Whether anyone took up this suggestion I do not know but, the 20 version is even more suited to electrifying - more wing area and lighter wing loading.

This time no arm twisting was necessary to convince our 'Fly Electric' correspondent Ian Peacock that a version should be built with silent - almost - power. I left it to him to convince fellow modellers that it would indeed be an honour to build such a project! The delights of this work fell on the shoulders of Morris Partington. Incidentally the airbrush work on both models is by Ian, he really is coming on quite well in this field, maybe he should write a book on the subject!

In common with the small version, the '20' does not have an undercarriage fitted to the prototype models. However, if you fly from tarmac and don't fancy scraping the underside away, suggested positions for the nosewheel and main wheel legs are shown on the drawings.

So, if you fancy a modem-looking aeroplane model with looks that are a cross between an F-16 and the Eurofighter, send off for the plan, get in your stock of balsa and prepare to do battle.

Construction. Take a good look through the drawings so that you understand the construction before you begin building. Work out your own particular radio installation and also the most suitable engine siting - bearing in mind the silencer location and the vertical fin.

Incidentally, there is no worry about having a forward-facing silencer, the exhaust gases will force their way out! Using the PAW diesel engine eliminates the need for a forward or rearward-facing silencer, the silencer is mounted at the rear of the cylinder and exhausts sidewards. The electric conversion obviously requires a certain modification of the fuselage structure to house the battery pack.

Fuselage. Chances are that the completed model will finish up tail heavy, so keep the battery as far forward as possible. There is room for a 600m Ah round NiCad battery to be positioned through F3 to F2..." 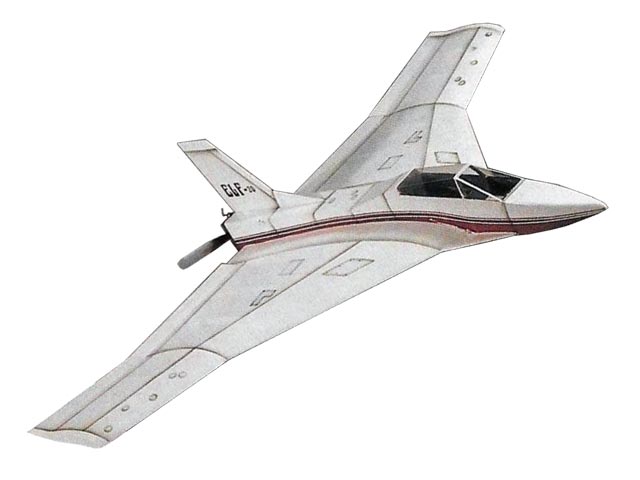