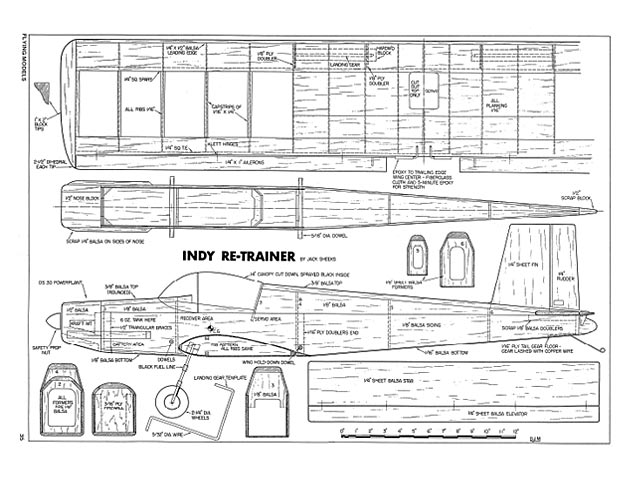 Quote: "The Indy Re-Trainer. This one is the perfect R/C ship for the ex-R/C'er who wants to try it all again.

Why would anyone name a ship the Re-Trainer? Well, over the past few years I've been in and out of R/C like a door knob, and I felt a strong need for some retraining before I dorked a biggy from lack of practice. One of the reasons behind my irregularity in R/C stems from my two teenaged boys flying competitively in Controline Scale. (Just for the record, Mike, the oldest, won Senior Scale, and Scott took 2nd in Junior Scale at the '76 Nats.) How's that for reasons?

Anyway, with a less than educated pencil, parts from three unfinished birds and a large scrap box, I began designing what I felt a suitable re-trainer should look like. A low-winged docile aircraft devoid of evil habits. Like its designer. Small enough to squish into any car without tearing the wings off when loading, light enough so you don't slip a disc carrying it to and from the field (3 lbs 7 oz) and powered by an engine that doesn't cost an arm and a leg to operate (OS .30 power).

After all this contemplation and a few dream fragments of Stand-Off Scale kind of realism, laziness and practical considerations won out and the lines took form on paper. When all is said and done I feel that the resulting Re-Trainer design makes for an attractive model which is quick and easy to build, along with it being a fine and predictable flyer.

With the model completed, I was just sitting there, beginning that old admiration period. Its always best to admire your own airplane in case nobody else does. My solitude was cut somewhat short by the clanging of the telephone, Bernie Ash and Bob Godfrey throwing down the gauntlet: Come out and fly it, right now! I hadn't figured on such a rash thing. My new airplane? The cold sweats again!

One blowout later my arrival at the old rnudpatch was in itself sufficient distraction to cause one Bernard Ash to plant his airborne effort vertically into the corn. Following the ten minute postmortem I was reminded it was now my turn to fly. On half charged batteries. My pleas for a test pilot for the occasion, all current on the questionable art fell on stone deaf and snickering ears. Bob informed me he couldn't on account of how he was going to take the pictures. And so it went.

With quaking fingers I looked the bird over once again. Bob displayed a minimum of confidence in the whole thing by check-ing out the control sequence, aileron mo-tion and all that. All went well however, in spite of my nervous knees. The throttle was eased forward and the ship tracked beautifully and lifted off in about 30 feet. Much to my surprise the Re-Trainer need-ed no real trim changes other than a little down in the elevator. It performed very well. The only thing it wasn't too great at was inverted flight, but for this it was never intended. The flat-bottomed airfoil is fine for rolls mid loops and Immelmans, and mild, slow training type approaches. You can't have everything.

Next flight up Bob Godfrey tried his hand and rang a lot more performance out of it than I would have thought possible. I could see I was really out of practice, though the mad Irishman wonders if I was ever in practice. Bernie ruined my day by telling me I should stick to R/C as they fly better than my ukies. This utterance was delivered as my engine dried out a quarter mile off and the Re-Trainer just floated on back to the runway. It was pretty. All who have seen the bird fly feel it is a nice, mild aircraft and as such it might just fill the bill for you. Doesn't cost too much either, so maybe it will do.

The Construction. To begin with, this ship has no mean tricks up its sleeve so it's very easy to build. Begin by selecting some good straight wood from your scrap box, your buddy, or if all else fails, from your dealer. Start things off by pinning the 1/4 in sq balsa stringers to the plan of the wing. Build this in two halves. Cut all the ribs the same from 1/16 balsa sheet, then commence gluing them in position..." 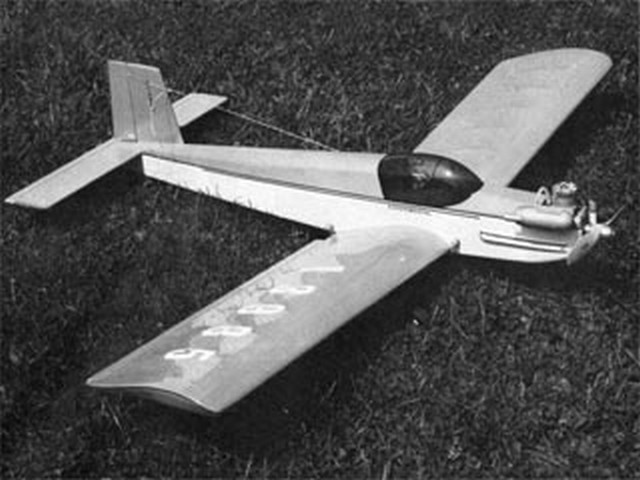