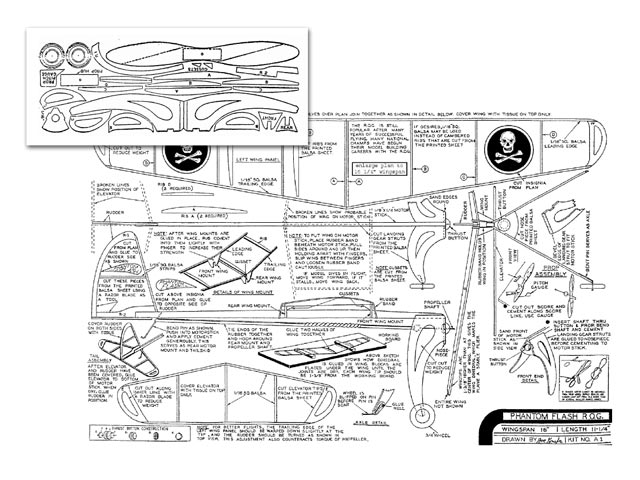 Quote: "Steve and Mary, I have tried several times, unsuccessfully, to print this for your collection. I have finally succeeded. Hopefully this reaches you intact and won't need too much cleanup. It looks to me like a copy of the original Comet plan, so I don't think there will be any ethical problems with any of the after-market clones.
I read a few years back that the flat image on the plan is 16-1/4 inch. I enlarged the image to that size to build myself and noticed that the port semi span is 8 inches and the starboard is 8-1/4. Presumedly that was intentional.
There are a number of eighty-somethings here in the US for whom this was the first model that really flew well. Thanks, GrandpaHLG"

Update 23/08/2019: Replaced this plan with a clearer copy, thanks to higgphanx1 who posted this excellent 600 dpi scan up on HPA.

Note it turns out the wings shown on this plan are symmetrical.

We all have stories of how we came to fly model airplanes. As for me, there is not a time in my life that I cannot remember being involved with aviation, either full scale, or models. My earliest aviation related rec-ollections revolve around Sunday afternoon trips with my Dad to the club flying field where he joined his modeling buddies. There they would take to the skies with their glow engine powered balsa creations in demonstrations of modeling skills that I could only hope to one day emulate (I was only 4 or 5 years old, after all).

However, I didn't go to the field empty handed! My early love of airplanes was not lost on my parents, and I would always have at least one of my own 'creations' to fly while the big boys had their fun. The planes of the times for me were Guillow's rubber powered Sleek Streaks and hand toss gliders that we would buy at the local drug store or Five and Dime. While my planes only cost pennies, they provided hours of fun and a learning experience that would serve me well for years to come.

Many times as I was chasing my planes at the field, and watching my Dad and the other club members fly their planes with complete control, I would wish that I could do the same with my little balsa creations. To have the ability to fly my own little planes with the same guidance and accuracy was just a silly little boy's dream. Little did I know, that one day I would not only be able to fly these little gems via radio control, but I would be able to do so on a level not even a starry eyed child could have imagined!

Fast forward to the past few years we find ourselves in an explosion of small and micro radio controlled aircraft that I could only dream of as a child. Thanks to the RTF and BNF options of the manufacturers, we have small, lightweight planes that can be flown not only outdoors, but indoors too! Their performance is amazing, and they have brought many new people to our hobby! However, it was only a matter of time before another beauty of these small craft became evident. The heart of these micro marvels, the radio bricks, can be harvested, and used to guide our own creations! Thank you, Horizon Hobbies and ParkZone!

Over the past few years, I have been trying to build at least one new micro sized, indoor flyer for the winter flying season utilizing the AR 6400 bricks. They have ranged from available kits, to a few of my own adaptations, and I have quite a list of future projects for the little receiver units. I hadn't quite gotten to this season's project when Jim Wiggin asked if I would be interested in doing a review of a micro kit he had available. In his hands was a Retro RC Radio Flash, and I don't think he expected that a 51-year-old could move quite that fast as the kit was snatched from his grasp!

Retro RC is one of several smaller companies that over the past few years have been offering small, laser-cut designs intended to utilize the Spektrum AR 6400 radio technology. According to their website: 'Retro RC's mission is to design, manufacture and sell high-quality model aircraft kits which will appeal to newcomers and old hands alike. We specialize in retro-looking designs and recreations of classic models from the golden age of modeling, the 1930s and 40s.'

Their Radio Flash is a scaled-up version of the 1930s Phantom Flash ROG rubber freeflight design. With a wingspan of 24 inches and the flying weight of 30 grams, the Flash is perfectly suited for indoor venues. However, in calm to very light wind, it can be enjoyed outdoors as well.

At first glance, the Flash appears to be a very simple design, and I didn't think it would take too long to complete, and I was correct. Overall building time was in the 2-or 3-evening range, and that was going slow. If you have all your radio and motor parts available, one could easily complete this kit in an evening, or Sunday afternoon. I was intrigued to see how it would perform in comparison to the other lightweight micro designs with which I had experience. So, let's get started!

The Radio Flash is packaged in a clear plastic bag, which seems to have become the norm for the micro kits available today. Inside the package you will find several sheets of laser-cut balsa, basswood, and plywood parts, a plastic bag of pushrods and miscellaneous parts, and a roll of Esaki tissue, all

receiver and motor combo taken from one of today's many micro offerings. The laser-cut sheets (above right) are laid out for display. Other than a few stubborn pieces, the laser-cutting is very good. All the balsa, ply, and basswood parts are neatly labeled in their respective sheets or bundles. rolled in three sheets of paper that make up the plans and basic instructions. There are no step-by-step building instructions.

One of the sheets has three-view drawings showing the placement of parts, and general building notes. The second is actually full size plans on which one can build the structure if so desired. The back of this sheet shows the layout of the parts on the Esaki tissue for the covering process. The last sheet shows all the parts in their laser-cut positions with labels, and the templates for the landing gear and tail skid wires.

The builder only needs to supply the re-ceiver brick and motor/gear box and battery. For this project, I used a brick and motor gear box harvested from a ParkZone Champ, but one could use any of the brushed motor combos found in a ParkZone Sukhoi, Polecat, or other similar models.

The balsa in the kit is very high quality, and the parts are all laser-cut from thicker stock, which makes it easier for a novice to handle. Gussets are engineered into each wing and tail component joint, making the balsa structure self jigging. One can build over the full size plans, but it is not required. As for me, if given the opportunity to build over plans or not, I always use the plans. I would highly recommend building over the plans for a beginner.

While the laser-cutting for my kit was good overall, a few of the parts required a lit-tle more coaxing to be removed from their sheets. Since I have not had the pleasure of building or handling other Retro RC kits, I can't say that this is normal, or maybe just a misadjustment on this cutting run. In any case, the quality of the laser-cutting is still vastly superior to a die-cut kit, and all the parts fit perfectly.

The tail structures are all balsa and the wing is balsa and basswood. The parts go to-gether very easily and in a very short time you will have all these structures complete. Just make sure you build a left and right wing half! Also, take your time on the wing center section joint to make sure you get the correct dihedral angle.

The fuselage is laser-cut from basswood. Two balsa pieces are added to the nose where the landing gear/motor mount attaches for more gluing area and strength. The wing mounts are simple balsa/ply sandwiches with small dowels for the wing hold down. A single rubber band holds the wing in position..." 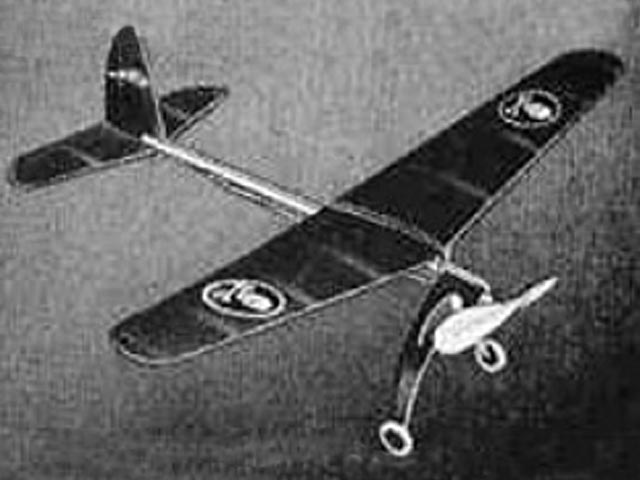 I confess I don't know whether one wing was designed to be longer than the other. Seems theoretically possible though. So I asked on RCGroups, and the answer seems to be no. This looks to be simply a printing/scanning error. The plan scan is low resolution, too. Does anyone out there have a higher res scan that we can work on? Then we can fix it up with equal sized wings :)
SteveWMD - 24/05/2018
Thanks to Pit for finding the new scan posted on HPA. It seems this now clears up the question of whether the wings were intended to be the same size, once and for all.
SteveWMD - 23/08/2019
Add a comment