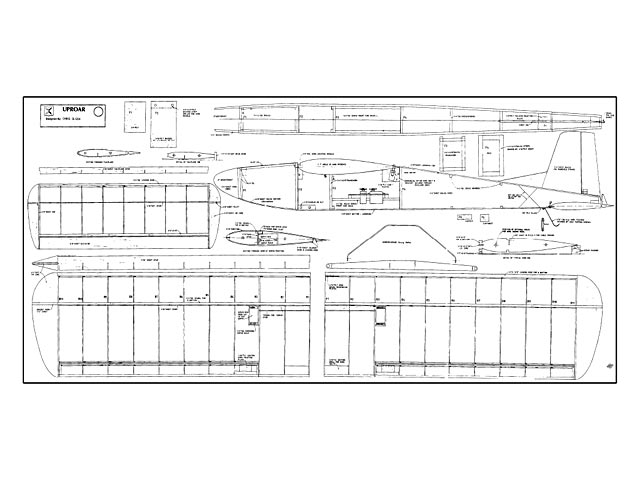 Quote: "Back in 1962, RAF Kenley was the venue for the 2nd World R/C Championships. After a spirited fly-off, Tom Brett took the trophy for the US, with Harry Brooks placing equal first for Great Britain, having come within 2% of the American's score (the FAI rules required that the scores had to differ by at least this amount). In third place came Chris Olsen (GB), with Frank Van den Bergh (GB) fourth, the resulting 2-3-4 earning Great Britain top place in the team results. Now, 34 years on, Chris Olsen presents an updated version of the model that he flew at the '62 World R/C Champs, designed with radios and engines of the '90s in mind.

UPROAR REVISITED. The first Uproar was built in 1957 as one of a series of models designed for a Fox 29 that I had purchased earlier that year. Uproar seemed to fly pretty well compared to other models I had made that year. This came as no great surprise as one of them had a wing area of nearly 1000 sq ins and weighed 7 lbs, slightly under powered, even by the standards of those days!

The next year I started contest flying. Uproar was the best model that I had available so I used it, and continued to do so until 1964. The main reason that I used Uproar for so long was that the model mortality rate at this time was such that in some years up to ten models were used up. In the six years that I was flying Uproar in competition forty models were made, twenty eight of which were Uproars!

The aerobatic schedule used during this period was much less complicated than that used today and the advantages of a low wing position over that of a shoulder wing were, in my opinion, minimal - shoulder wing models were easier and quicker to build.

I have built thirty-six Uproars since 1957, none of which were exactly the same. Each time a model was built some changes were made. This had the effect that with the large number of models built in a year problems were sorted out in less time than if only one or two models were produced. I also learned the hard way a lot about the aerodynamics and construction of aerobatic models in a much shorter time than other competitors in that era. This might be called the up side of tearing up a lot of models.

Uproar was designed at a time when the airborne radio, actuators and batteries weighed over 2 lbs. The receiver was about 3 x 2-1/4 x 2-1/4 ins and weighed over 1 lb; some systems were even larger and heavier. For this reason the size of the model, particularly the dimensions of the fuselage were determined by the radio equipment. In recent years however it has been useful to have a model which is fully aerobatic and has room to put extra bits of equipment with which one might like to experiment.

A number of people who have flown Uproar in recent years have been surprised that using modern radio equipment and engines the model performs so well. It was suggested that it would make a good aerobatic trainer. Uproar, with modern equipment, will perform any manoeuvre in the current aerobatic schedules. It is also simple to build.

The original model had some major changes made to the wing in 1960, a different aerofoil section (NACA-0015) and different wing construction. Since then the important changes have been to reduce the width of the elevator and ailerons and increase the length of the ailerons. It seems that, especially with proportional control, narrow control surfaces moved a lot work better than narrow surfaces moved a little. Conversely the fin and rudder were enlarged in the hope that this would increase rudder control, but I am not sure that this has worked as well as l had hoped.

The structure has been altered to an all sheet fuselage, wings and stabiliser. This has increased the airframe weight slightly but has also increased its strength and rigidity. This was necessary as modern engines are more powerful than older types. Early models were powered with Fox and ETA 29's; since then 4 have used a Merco 49 & 61, Irvine 40, OS 40SF, 46SF, 46VF and 61RF. The vertical performance of the latter was quite interesting as the model only weighed 6-1/2 lbs.

Construction. When building any model it is worthwhile taking the trouble to make it as accurate as you can, even if it takes longer to build. If the model is not made accurately it will not fly well and will be difficult to trim, particularly if it is an aerobatic model. Trimming out an acrobatic model is not easy and a lot of pain and anguish can be avoided on the building board.

For some years I have been using a system for building models by 'making a kit of parts'. This means cutting out all the major parts at one time and then assembling them, helping to reduce the time it takes to build a model. To start with the wing sheeting, you will need to join four pieces of 3/32 in, sheet to make a panel 12 x 31 inches, allowing an extra inch for errors..." 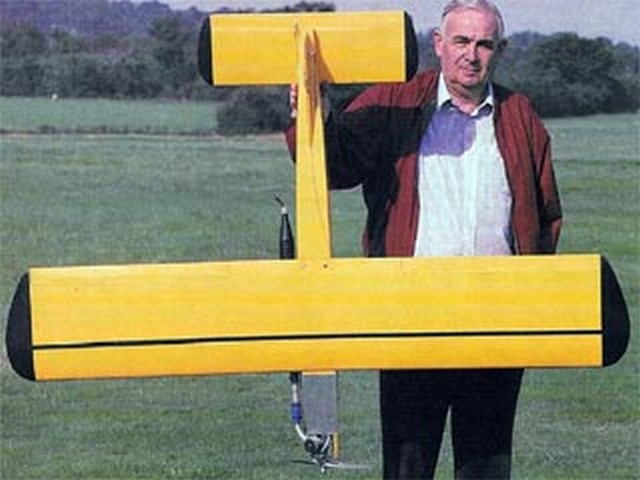