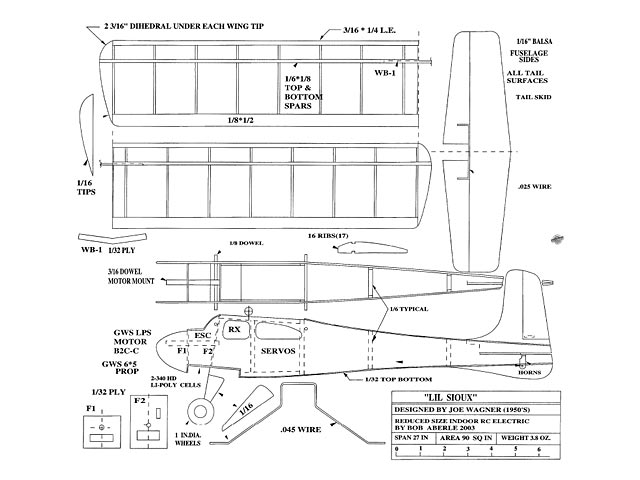 The Lil Sioux has a wingspan of 27 in and 90 sq in of wing area. At a weight of 3.8 oz, the model has a wing loading of a light 6 oz/sq ft. It employs 3-channel control of the rudder, elevator, and motor throttle. Motor runs in excess of 30 minutes are possible on two FMA/Kokam 340-mAh HD Li-Poly battery cells.

Back in the late 1940s and early 1950s, a young modeler by the name of Joe Wagner designed a series of free flight and control line kits for the old Henry Engineering Co, which was later bought up by Veco. Joe still writes a regular column in Model Aviation. His creative genius has spanned almost a half-century of popularity. People are still flying replicas of his designs, and BMJR Model Products Inc is now offering a new kit of Joe's Dakota biplane free flight model.

During this past year, I revisited Joe Wagner's Dakota (oz233) bipe, reducing it down to a total wing area of 69 sq in and a weight of just 1.3 oz. This replica, which is intended for indoor remote control (R/C) and magnetic actuators, appeared as a construction article in the May 2003 RC Microffight newsletter. I was so impressed with the performance of this Lil Dakota that I decided to try my luck next by reducing Joe's Sioux (oz277) monoplane free flight design. which is of the same 1950s time frame. For my Lil Sioux project, I chose a slightly larger size: a wing area of 90 sq in and a total weight of 3 to 4 oz. By doing this, I was able to use conventional, yet small and lightweight, R/C equipment.

The final design can easily be built from several pieces of 1/16 by 3 by 36 in balsa sheeting. The wing (which has a 27 in wingspan) is built up and covered, while the remainder of the model is simply sheet balsa construction.

I tried several new items on the Lil Sioux and thought I would mention these at the start. The choice for a motor was the inexpensive GWS LPS B2C-C motor with a 6.2:1 gear reduction ratio. This is the smallest (to date) of all GWS motors, weighing only 0.42 oz, and is very inexpensive. I'm truly surprised_ that we haven't seen more applications for this motor over the past year since it was introduced. As we proceed, please note how this GWS motor is mounted into the Lil Sioux.

Equally important, I used a new 2-cell battery consisting of FMA/Kokam 340-mAh HD Lithium Polymer (Li-Poly) cells. At a weight of just 0.71 oz, this pack proved to have more than enough capacity. As an added trick, I employed a set of four tiny magnets to hold the battery in place on the underside of the fuselage, just aft of the firewall. We have been told to safely charge Li-Poly batteries outside our models, and with this setup. all you need to do is pull a little on the battery pack and it pops right off into your hand for charging.

Regarding radio equipment, I wanted conventional components, but still wanted good, solid radio operation. With this in mind. I selected the FMA Direct M5 micro dual conversion receiver, which is now available on both 72-MHz and 6-m R/C channels. I also selected two FMA Direct PS-20 sub-micro servos and a Castle Creations Pixie-7P electronic speed controller (ESC) with a battery eliminator circuit (BEC). This ESC was set for a 6-volt cutoff because that is the minimum recommended for two Li-Poly battery cells..." 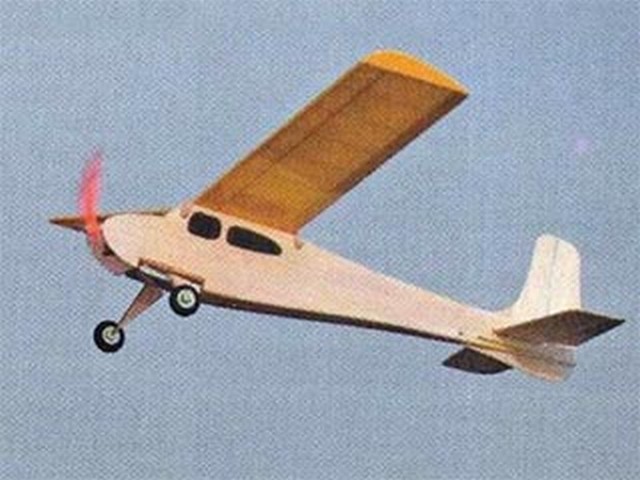