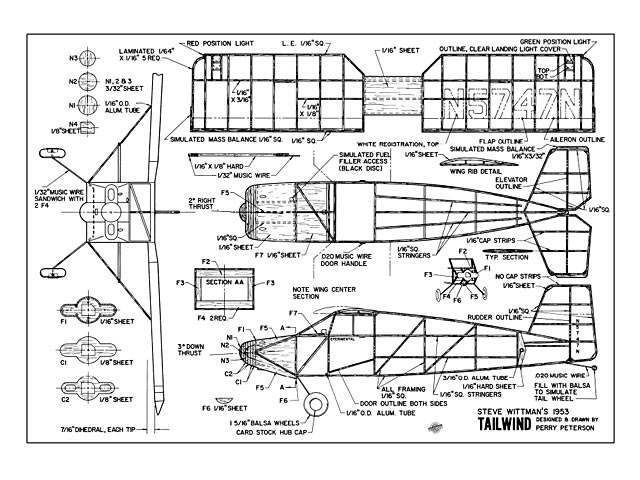 My keen interest in the Tailwind began on a brisk autumn morning in 1959 at a Sunday breakfast fly-in at Nebraska City, Nebraska. The airstrip was out behind Vic Grundman's barn on the south edge of town where my dad parked his Piper Tri Pacer. A Tailwind fitted with a nose wheel was just lifting off the sod runway as we arrived. If only I could find a 3-view of that Tailwind W-9L with the tri-gear... oh well, the search goes on.

Steve Wittman, the designer of the Tailwind, has been designing and building aircraft since the 1920s. His designs include successful racing planes such as Bonzo, Buster, and the current Witt's V, Not only was Bonzo a household word in the 1930s, Steve was widely known as a top air race pilot. Along with his long line of race planes, Steve designed and built small light private aircraft, and prior to the Tailwind he built the lesser known two-place Buttercup and the four-place Big X.

The Tailwind appeared in 1953 and has since become a classic in the home-built aircraft field. As proof of its sound design, it has been changed only slightly through the years while becoming a legend. The cowl shape has been altered, the wingspan has been increased from 20 ft 11 in to 22 ft 6 in, and the airfoil has been modified. It makes an excellent free-flight scale model subject and has been built in many sizes. There was even a 7 inch span Wittman Tailwind (oz7495) model designed by Walt Mooney and published in Model Airplane News in March 1962. The Tailwind presented here is a model of the prototype built by Steve Wittman in 1953, as it appears now in the EAA museum.

Construction. Make two identical side frames over the plan. For a plane this size it is important to select quite firm 1/16 in square balsa for the longerons; otherwise the fuselage could appear scalloped after the tissue is shrunk. Remove the fuselage side frames from the plan and join at the
tail post. Cut 1/16 in square crosspieces, using the top plan view for proper length, and glue in place starting at the rear and work-ing forward to the windshield and landing gear area. Use F-1 to join the fuselage at the front.

Form the landing gear from .030 in music wire, using the front view as a guide, and sandwich between two F-4s using epoxy. Clamp the sandwich firmly with model clamps while it is drying, (The clamps I used for this step were purloined snap clothespins and they worked great.) Now install this landing gear assembly in the fuselage at the point shown on the side plan view. Glue F-2 in place under the windshield area. Install an F-3 on each side of the fuselage between F-2 and F-4. Make F-5s as shown on the side view, trim to ex-act length, and glue in place..." 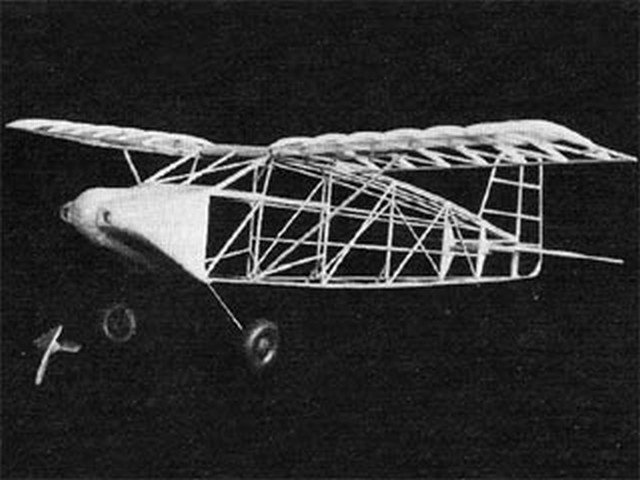