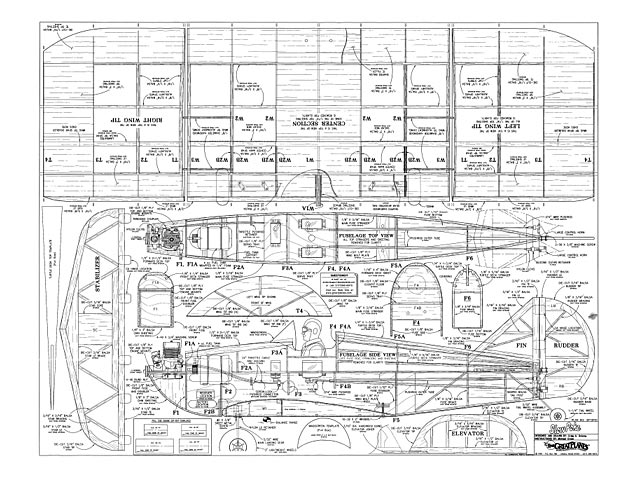 This is a discontinued kit, from Great planes. See their site at https://www.greatplanes.com/discontinued/gpma0491.php for more details, a full parts linting, and full kit manual download.

Quote: "Congratulations and thank you for purchasing the Great Planes SlowPoke. The SlowPoke is perfectly suited for small field flying and because of its size is easy to transport. Great Planes has taken a simplified approach to the SlowPoke's design by incorporating a CAD designed airframe with the 'stick style' construction of yesteryear.

The SlowPoke was intentionally designed for easy 3-channel flying, a small displacement engine and a light wing loading. When finished, the SlowPoke is quite capable of slow, leisurely flight without the worry. Its styling is reminiscent of the Golden Age of aviation and very pleasing..."

Update 29/02/2020: Added supplement article "'The Super Slow Poke" written by Terry Overton, thanks to Markus. This covers some minor glitches with the kit instructions, also covers modification of the kit to include ailerons and use an OS 25 engine. This (I think) was originally published on the Skymasters R/C of Michigan website - see http://www.skymasters.org/index.php?page...

The Great Planes SlowPoke is cute, it's got charm, it doesn't cost very much and, as its name implies, it can fly real slow, or just poke along through the sky. It can also be flown at a very brisk speed and is quite acrobatic for a 3-channel airplane. The SlowPoke is not your average slap-together square box that holds the radio and provides a place to attach the engine, wings, and tail. In short, it's a real fun sport model with unique looks!

The kit comes in a colorful carton measuring 37 x 6 x 3-1/2 in. Inside were the rolled plans, the plastic packs containing the hardware and accessories, along with all of the die-cut, sheet and strip wood needed.

The review kit was from the first production run and there were a couple of minor errors in the instruction manual that will be corrected as soon as possible. The first error was quickly caught and Great Planes sent correction info about correctly assembling the engine mount to the hobby shops that sold the kits. The incorrect information contained in the manual would lead you into an assembly error that would have you build in 2° of left thrust. Be sure that your model has 2° of right thrust. With the exception of the corrections, my review model was built exactly per the assembly manual. Following the manual's step-by-step instructions, I checked off the block for each step as I went, and all parts fit amazingly well.

Construction: The full-size plans are on one 36 x 46 in sheet. The 32-page instruction manual has 99 photos, along with a number of sketches to guide you through building. The horizontal stabilizer, elevators, fin, and rudder are all built-up balsa and are assembled first. The center section of the wing is built next, followed by both outer wing panels, both of which are also built-up balsa structures. Construction is totally conventional and the whole model was finished with a 1 oz bottle of thin and a 1 oz bottle of medium Pro CA glue, along with a small amount of 1 hr epoxy. The epoxy was used in joining the wing panels, joining the two elevators, installing the landing gear blocks, and around the front fuselage assembly, as the manual suggests.

The main fuselage frame starts with two large die-cut front sections (a left side and a right side) having 1/32 ply doublers added and the rear of the sides then built behind the front sections.

Next, the ply servo tray and a balsa rear section are joined over the plan's top view. Be sure to position the servo tray so your throttle actuating cable goes forward on the correct side of the fuselage. The cable for 2-stroke engines goes forward on one side; for the 4-stroke O.S. .26, it goes on the other side. The fuselage sides are added and, in essence, the fuselage is built upside down over the top view fuselage plans. The fuselage sides bow in at the front, and it helps to have suitable clamps on hand to hold things as glue sets. The front of the wing locks into the fuselage in a simple way. After careful wing/fuselage alignment, the two holes are drilled and tapped through the wing's trailing edge for the two nylon bolts that hold the wing in place. The ply parts that form the engine mount and nose of the fuselage are then assembled on the front end. Be sure you are building in right thrust per the plans.

The fin and stabilizer are added next; then the turtledeck behind the cockpit area is added. Building the front deck (the section in front of the cockpit) is a bit challenging, but you'll end up with a nicely-shaped compound-curved section that adds to the SlowPoke's character. It involves some careful carving of balsa, so go slow and follow the plans.

Radio: The instructions detail installing your radio before covering the SlowPoke. This is a bit unusual, but no problem. We're using the new Hitec Flash 5 with the all new System X software that is aimed directly at all fixed-wing models. System X is about the simplest program to use I've seen yet. It has virtually all the features we can use, and none of the little-used functions as in some far upscale radios. The 3 HS-422 servos fit the plywood tray with a minimum of carving.

Covering: A roll and a half of yellow MonoKote (9 linear feet) covered the SlowPoke. Red/white/blue trim was added on top; two big black visibility squares are on the bottom. Black was used on the fuselage front. The compound curves (in front of and behind the cockpit) were covered in a left piece and a right piece - followed by a top piece. The decorations add to the model's appearance.

Flying: Our review model required 6 oz. of lead (which was epoxied behind F-1) and it balances exactly at the CG location shown on the plans. With the control throws set as specified, this is a real fun model. You can fly fast or slow it way down and it shows no bad signs. It'll do a 4-point roll, big loops, square loops, small loops, tiny loops, and it flies inverted! Touch and go's are a delight. If you increase the elevator travel from 5/8 to 7/8 up/down travel, it'll easily do tail spins and one outside loop! Now I'm wondering how it'll go with a good hot fire-breathing .25. Note: If you find the model too sensitive or twitchy, you can reduce the travel to 1/2 each. Also, be sure to check that the CG is correct.

Conclusion: SlowPoke is a real fine flying model. They're now being locally flown by semi-proficient, as well as advanced R/C pilots, and they are lotsafun for not too many hobby dollars. Why not visit your local hobby shop and look inside a SlowPoke kit?" 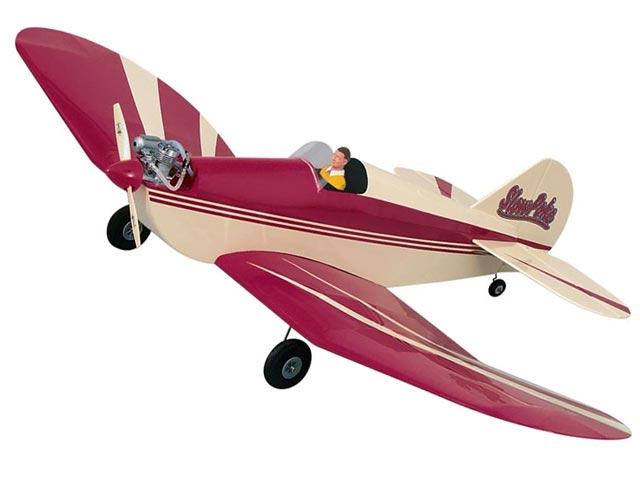 Hello, do you need any other rib templates for this plane? If yes, could you pls send me the template? Cheers!
Sebastian - 17/12/2021
Everything we have is up here on the site. If you don't see it here, then we don't have it. That's how Oz works. But bear in mind this plan is tagged as 'formers unchecked'. In the end, you just need to put in some research work for yourself, and decide what exact details you need, for yourself. This will depend on your skills and experience as a builder. Recommend you start your research with page 6 of the manual, that's the parts ID sheet.
SteveWMD - 17/12/2021
Add a comment