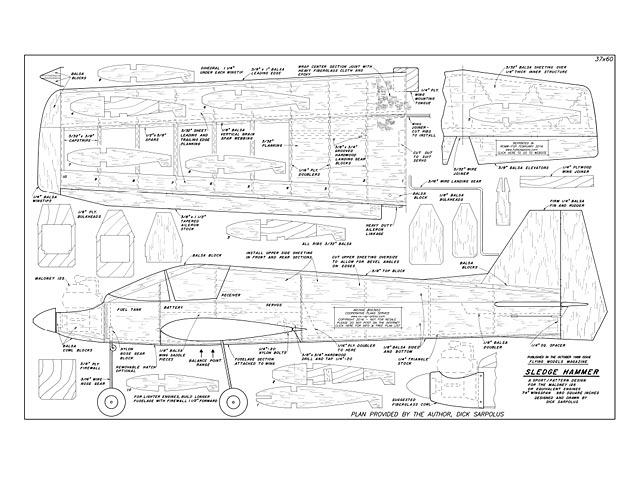 Quote: "Sledge Hammer By Dick Sarpolus. Looking for a low-cost entry to 'big' models? Here's a proven planform, just right for the Maloney 125.

I like two cycle gasoline/ignition engines, commonly referred to as chain saw types, as powerplants for our R/C sport aircraft use. Used initially for quarter scale projects, the first such engines really were from chain saws, modified for model aircraft use. As modelers accepted them, engines were produced specifically for our purposes; the most famous was, and probably still is, the Quadra, although a number of others are also now on the market.

Used at first because they were the only large powerplants available, gas engines have a number of nice features. One of the most liked features is their fuel; gasoline and oil, which is much cheaper than our alcohol-based glow engine fuels. They're extremely durable, long lived, because they tend to be over-built, for commercial and industrial use. They idle well, low and reliably, due to their spark ignition systems. Since their carburetors have built-in fuel pumps, location of the fuel tank is not critical, and the engines run steadily and consistently.

We can get gas/ignition operation with conversions of conventional glow engines, both two and four cycle types. After all, the very first model engines were gas/ignition, until the glow plug was invented. But the cost of a large model engine, particularly the four cycles, plus an ignition conversion system, is not low. And the chain saw types are generally priced pretty low.

Before this sounds too much like a sales pitch, there are some disadvantages along with the gas engines. They're heavy; the durable construction and magneto ignition add weight, so their power-to-weight ratio may not be so hot. And they're primarily for lower RPM, high torque operation. With their size and weight, they go in large aircraft. So they're not suitable for every type of model use. If you want screaming-hot performance you'll probably go with a schnuerle-ported, tuned pipe-equipped two cycle engine, with plenty of nitro in the fuel. And if you want the unique sound of a 4-cycle, you'll go that way.

The Maloney 125 interested me because it offered the gas/ignition features in a smaller than chain saw size, I had already built a model for the earlier Maloney 100; my Enticer design appeared in the May 1987 issue of Flying Models. With a 72 inch wingspan, 940 square inches wing area, and a weight of nine pounds, the Enticer is a good combination with the Maloney engine. It's big enough to handle the size and weight of the engine, and it's small and light enough to perform well with the engine. If you don't want acrobatic capability the same engine can handle a larger and heavier airframe; the Maloney will fly a 13 pound Robin Hood easily, but it won't do the maneuvering the Enticer will.

This time around, I knew what I wanted. The size, weight, and performance of the Enticer for the new Maloney 125, but the styling and appearance of a pattern ship. I wanted a tricycle landing gear, a tapered wing, and the pattern ship look - in a larger size - not for competition but for sport flying. The die-hard competitor already knows what the hot competition setup is, and he'll go for it.

I had the design in a smaller size, my Hammer (oz10680) aircraft, and the name: with a Maloney engine, this one would be the Sledge Hammer. It couldn't be a direct blow-up of the smaller airframes, as the engine choice dictated some design changes. The fuselage became wider to accept the big engine..."

This plan bears the legend: "Plan provided by the author, Dick Sarpolus".

This plan is stamped as Archive #003652 from the Cooperative Plans Service. See their website at www.co-op-plans.com

Update 11/12/2018: Replaced this planfile with another version using less file compression on the PDF. As fas as I can tell this is now pixel for pixel exactly the same drawing, still at 300 dpi, but this one should work better for plotting etc, thanks to stevane68.