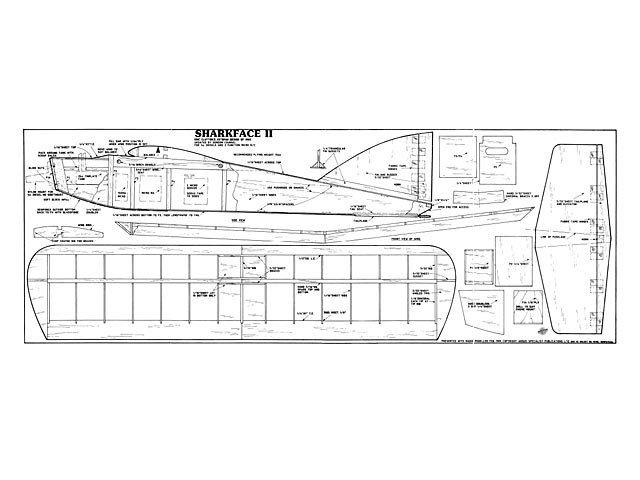 The original Sharkface (oz4416) was a small rudder-only, R/C model dating from 1965. It came virtually at the end of the single-channel era, a period lasting from about 1949 to the mid or late 1960s. I have always thought the models of this time have been neglected by vintage and nostalgia enthusiasts, probably because they are fairly recent history. This is a pity, as the single-channel model was the subject of much development work which has now been incorporated in modern R/C practice.

In November 1986 I had the 'Whiplash' revival published by Radio Modeller, this design being probably the first rudder-only acrobatic model, and dating from 1950 when ground-based transmitters and valves were still standard practice. By 1965, transistorised and relayless receivers of very low weight were available, together with light, hand held transmitters. The rudder was still normally operated by the rubber driven escapement first invented by the Good brothers in the 1930s but greatly improved in reliability and much lighter (Elmic Conquest, Compact, Commander, etc).

This led to smaller R/C models with under lcc diesel and glow power, eventually reaching an extreme with the 22 in span Sharkface. This design by Eric Clutton was intended for windy weather operation, and the original plan shows knock-off engine mount, push-in dowels, etc., indicating that crashes were to be expected and survival hoped for! The original Aeromodeller article places considerable emphasis on weight saving, logical with a wing area of only 110 square inches.

Before building the model I decided that, rather than reproduce the original with total accuracy, I would adapt it to two-channel proportional use. In fact, very few departures from the original proved necessary.

Fuselage. This was built very nearly as per plan, the initial differences being as follows:

1) A 150 mA/h nicad was used, the space between F2 and F3 being reduced to just hold this battery, vibration resistance being provided by two pieces of wing seating tape wrapped around the unit.

2) F4 was placed so that the Fleet micro-Rx could be fitted vertically in the same way as the battery, again with wing seating tape,

All this work should be done before covering the top of the fuselage so that two Sullivan (or similar) plastic snake push rods can be fitted, exiting the fuselage at a convenient position at the rear to operate the rudder, and the elevator horn which is mounted on top of the elevator. The snake outers are secured on a cross-piece of balsa about 1-1/2 in behind F5a, clearance holes for the snake inners being made in F5a itself. This arrangement is necessary to give free push rod movement in the limited space available. No intermediate support is required because of the very short lengths involved.

4) The `knock-off engine mount as shown on the plan was tried, but the combination of a rubber banded mount and greasy fuel was found to be a considerable problem so that, when the model was re-engined, a rigid mount to a ply firewall was adopted. Beam mounted engines such as PAW 80/100 could use one of the small .049 size glass filled nylon mounts (which will, hopefully, break in a crash!) The tank used is a metal type very similar to the one on the plan, except that only one vent is used to prevent syphoning, filling being done through the feed pipe. I also used a large filter in the feed pipe on the theory that it would hold enough fuel to keep the engine running during aerobatics; this system has, in fact, proved very satisfactory. Tank size on my model is approximately 18.1/2cc.

6) As any model without an undercarriage seems to make a dash for the nearest hard surfaced area on landing, a piece of fibre glass tissue was resined in place on the bottom of the front fuselage from Fl to just behind F4.

7) The fuselage top from F2 and F5a is left unsheeted until the final assembly, so that the wing can be moved about to get the optimum CG position, as on the plan or slightly forward of it. The space not occupied by the wing is then filled in, covered and fuel proofed last of all, dowels having been fitted in the appropriate places.

Tail and control surfaces. The rudder should be left the original size, there is more than enough! Mylar strip hinges were used instead of the tape shown on the plan. Fit 1/4 in fairings (I used triangular stock) and cover before gluing to the fuselage. A separate elevator 3/4 in wide at the centre is cut and hinged in the same way as the rudder..." 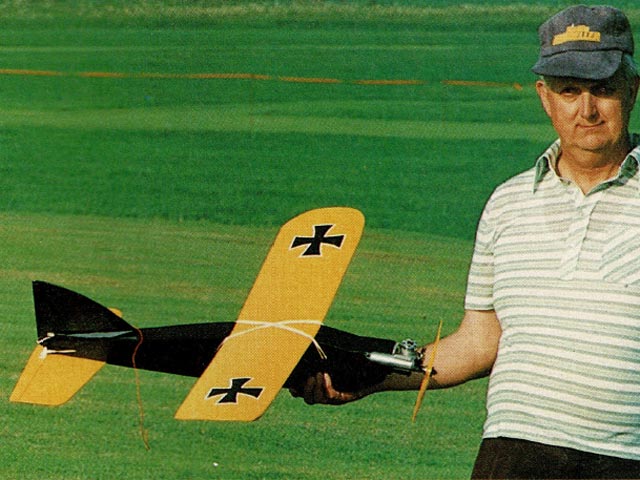 Hi there, please find attached a couple of photos [more pics 003-004] of my 'Pinkie' Sharkface, for your Outerzone Sharkface II web page. Constructed over nine days during the Covid-19 lockdown here in New Zealand. Mine is 3channel, has an extra wing bay each side taking the wingspan up to 25", and an AUW of 11.8ozs. With an Emax 2812 1534kv motor/6x3 prop, and 800mah 3s lipo, I can throw it around for 8 mins+ - it will loop, roll etc yet will slow right down glide well for spot landings almost at my feet. It's a great 'chuck in the car as a back up' model as it takes almost no room.
As the Sharkface II article suggests, everyone should have one! Regards, and keep up the great work on Outerzone,
Nick - 11/07/2020
Add a comment