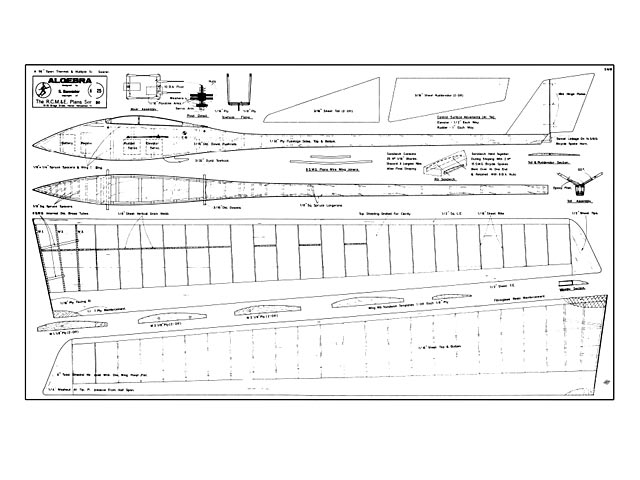 Incrediby, Algebra III is a development of Algebra I and Algebra II! The Algebra phenomenon started as a high aspect ratio (20:1) power assisted glider, 96 in span, open structure, flat bottom wing, with an .049 up front. This model was fast, good in lift but came down faster than desired out of lift.

Algebra II followed with more wing area, lower aspect ratio (14:1) and an open structure wing incorporating an Eppler 387 wing section. The wing loading was lighter at 61 oz per sq ft and ballasting this up to 8 oz increased the speed range without reducing the endurance. I must sincerely thank a friend for kindly testing this model to destruction last Boxing Day by towing the model to 600 ft in a 300 ft cloud base!

Algebra III has a smaller tail surface area, all sheet wing, altered Eppler 387 wing section and wing loading of 8 oz per sq ft. It is interesting that the all sheet wing weighs 16 oz complete, only one ounce heavier than the previous open structure wing. I am a slow builder but can get Algebra III in the air after only two weeks of evening building.

Some measure of the design's potential as an all-round performer can be gauged from its performance at the first UK Soaring International Meeting at Halton. Algebra III placed 5th in both the model and pilot's first venture into soaring competition.

Wings. Cut the leading and trailing edges from a sheet of medium soft 1/2 in x 4 in x 48 in. Razor plane the trailing edge to an oversize shape to enable ease of locating the top sheeting at a later stage. Select five sheets of medium 1/16 in x 4 in x 48 in, for the wing sheeting. One of these sheets is cut down the centre and each half is again cut from corner to corner, giving four triangular sheets. The sheeting pieces are now joined and sanded before assembly of the wing.

Now cut twenty five 1/16 in medium balsa rib blanks and place them in sandwich fashion between the two rib templates. Hold this assembly together with rubber bands and drill two holes for the retaining bolts from the smaller template through the sandwich. I use 15 swg bicycle spokes bent over at one end and retained with 8 BA nuts to hold the sandwich together. Having carved and sanded the sandwich to shape, discard the three largest ribs as these will be replaced with the three 1/8 in ply root ribs..." 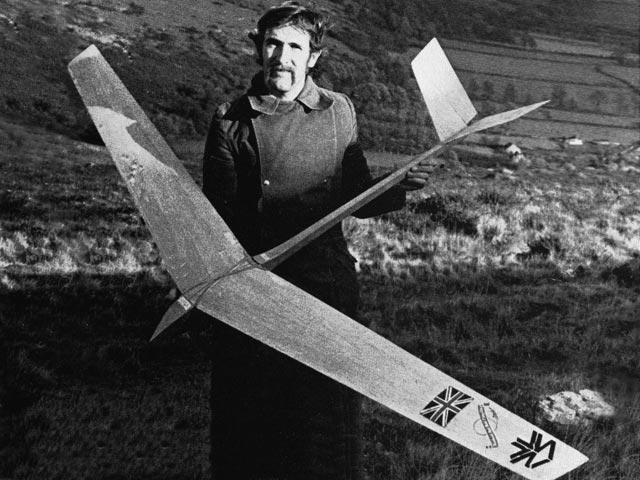