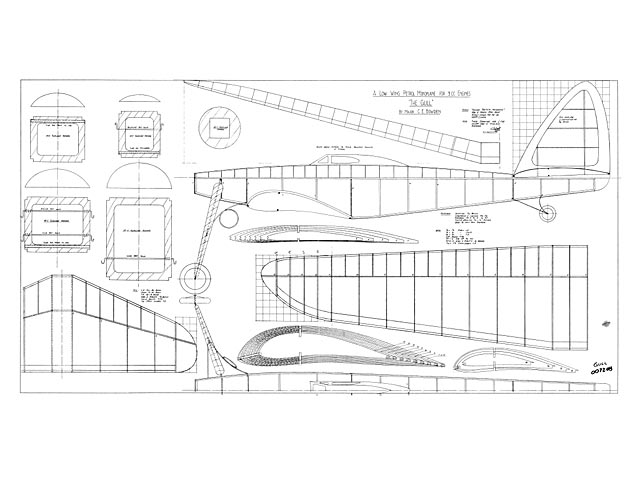 Quote (from plan drawing): "A low wing petrol monoplane for 9 cc engines 'The Gull' by Major CE Bowden. Source: 'Newnes Practical Mechanics' Feb/March 1940. Issue kindly copied for me by Geoff Clarke. Note: These drawings are half size except ribs and fuselage formers."

Note: It seems the use of the title "Gull" on this plan drawing is mistaken. Certainly there was a different low wing power model design by CE Bowden that was called Gull ...and this is not it.

Quote (from article): "A pioneer of model petrol-engined planes in this country is Colonel Bowden, and in view of the fact that so many petrol engines are now available at a reasonable price, I propose to describe the construction of one of his machines. I have obtained the details from Colonel Bowden of one of his low-wing petrol models which is really stable and simple to construct.

Not only is the model stable, but it has been found to be more stable than the average good high-wing model. This is no exaggeration, but is an actual fact. On pages 228 and 231 are shown photographs that give a general idea of the model with its rounded top to the fuselage. They show its keen but simple lines combined with general dihedral angle of the wings.

The Fuselage. Figs 251 and 252 on pages 229 and 230 represent a plan and side elevation of the model. A scaled-up full-size drawing should be made upon cheap drawing-paper, unless the builder wishes to keep his plans, when a better but thin paper should be used. It is necessary to draw up the fuselage full-size, side elevation and plan, on one piece of paper.

From this and Fig. 255, dimensions of the five 3-ply formers can be obtained, and the formers cut from 1/8 in 3-ply, except No. 1 nose-piece former, which is cut from 1/4 in 3-ply. All formers are fretted out for lightness, and these formers make jigs to keep the fuselage true whilst building.

As the tops of the formers are measured from a straight top line from the fuselage, if the formers are accurately cut and the fuselage sides correctly shaped the correct angle of incidence of the low-wing will be automatically obtained. The formers also take the shocks, and stubs of detachable wings and tail-retaining hooks, engine, and undercarriage.

Wire hooks, as shown, are bound with thread and glued to the formers. Hooks should be of 16 swg wire (see Fig. 255). The two sides of the fuselage are cut from 1/16 in sheet balsa of light weight to the side elevation shape of the fuselage..." 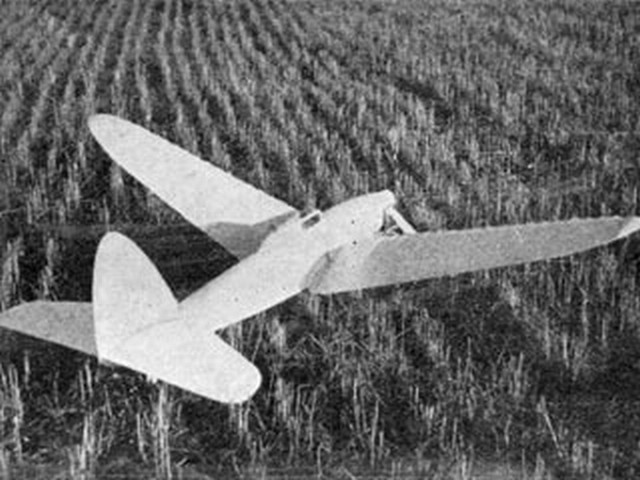 Possibly also known as the "Petrol Low Wing" or "Bowden Low Wing Monoplane" ...the title of this plan/design is not certain. Any help with this much appreciated.
SteveWMD - 06/05/2018
I Steve/Mary, attached a chapter on low wing monoplane of CE Bowden. The book (1949) from F.J. Camm (the Brother of the most famous Sir Camm who designed the British fighter Hawker Hurricane) edited by the same George Newnes that published Practical Mechanics magazine. F.J. Camm seems to had a close friendship with Col. CE Bowden and there is more material survived about the colonel on Camm's books rather than by colonel himself. To me this is the final words on the model name, it has no name. Probably this is the same article published on PM mentioned in your plan. It was common to realize a book with the past article from the magazines. In any case the plane looks obsolete for 1949 style, in fact it was originally published or draft in 1937. regards,
Pit - 06/05/2018
Thanks Pit. Have changed the listing now from "Gull" to "Low-Wing Petrol Monoplane".
SteveWMD - 06/05/2018
Add a comment