Aeromodeller, our sister magazine, has been a constant inspiration to me for the past forty years, I often think that the sports free-flight enthusiasts show more ingenuity than any other branch of our hobby. When George Mathieson's Elf (oz3825) design for a little CO2 powered, delta fighter style model was published in the February 1985 Aeromodeller, I was immediately intrigued. Here was a 'different' shape which had the bonuses of relatively simple construction, compact one-piece dimensions and modern appearance. Tempted as I was to build the CO2 free-flight version the temptation to enlarge it for two functions R/C was even greater, hence the design presented here as a full-size pull-out plan.

George Mathieson's Elf (experimental light fighter) design was based on the F16 American fighter so what better name to give the R/C version than the Elf-16? It follows the constructional methods and overall design layout of the original model and utilises the inboard elevator and flap sections as combined ailevators - or are they elerons?

It would be wrong to give the impression that the initial test flight was undertaken without a certain trepidation. Knowing that the free-flight version flew well is one thing, the requirement for 'disrupted' R/C flight can be rather different. The original CO2 model incorporated slotted outboard ailerons, I had used inboard, straight coupled, versions with a fixed trailing edge to the outboard panels. How much movement should there be on the ailevators and should the CG be further forward on the R/C version? A rapidly approaching deadline and a break in the winter weather put a stop to any further armchair philosophising.

From the hand-launch the Elf-16 climbed away at a gentle angle, steady as a rock, but with a natural right turn. Full left trim just 'correct the right-hand bias' and, at a safe height, a left-hand turn was investigated. There was no tendency for the nose to drop or rise, and after a couple of circuits the model was set up for a loop. Insufficient speed build up in the dive and a rather gentle use of elevator control, resulted in the Elf-16 almost failing out of the top of the loop, but recovery was easy and with a total absence of any control 'funnies'. Transition to the glide, when the engine cut, was straightforward with no trim changes. Unlike some deltas, it is not necessary to bring this one in on the approach nose high; it responds to elevator control for the landing flare out similar to a conventional model with good authority to the touch-down point.

Value for Money. In keeping with the theme of this issue, the Elf-16 is inexpensive to build, requires only two function radio and a Cox .049 engine to provide the power. I used a Cox Black Widow engine as this has a larger fuel tank but it would be possible to use other forms of Cox engines and fit 'top-up' tank, connected to the fuel filler on the Cox. The beauty of the Cox reed valve engine is that they will run in either direction (and usually start in the 'wrong' direction!) with equal facility. A standard propeller can therefore be used for reverse rotation operation, fitted on backwards for a pusher.

To keep the model as simple and light as possible no undercarriage was fitted, for flying from grass patches this is ideal. If you fly regularly from a tarmac runway you could fit a tricycle undercarriage, the leg positions are indicated, but keep the wheels and legs light and remember that you have no rudder authority for take-offs - the model must track straightforward and be released directly into wind..." 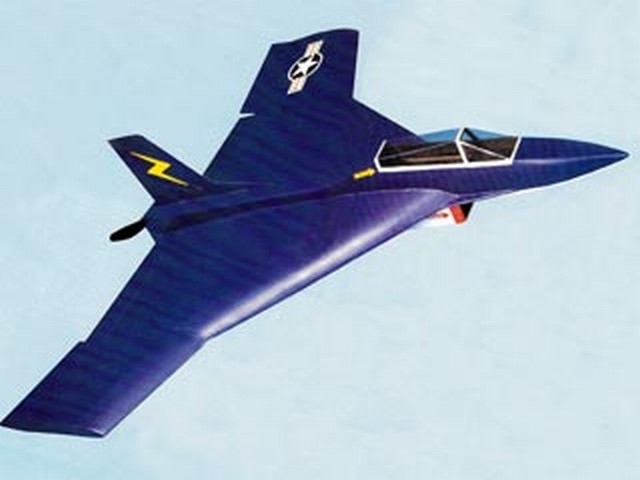