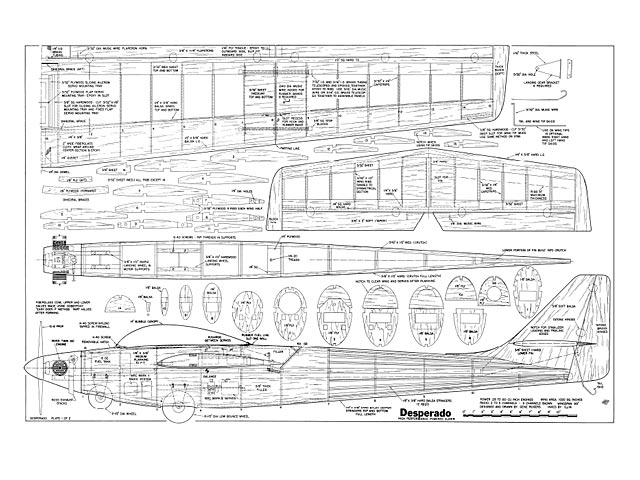 Quote: "A Ross Twin .60 slow-rolls it across the sky. Low tide in the tank? Just droop the flaperons, thermals are for free. Desperado by Gene Rogers.

On first impression, a Sailplane powered with a roaring twin cylinder .60 engine seems startling! Upon further consideration why shouldn't a high performance airplane, as a soarer is, be able to handle large amounts of thrust and torque from a powerful engine? Efficient soarers sometimes achieve high speeds in transit from thermal to thermal. Long tapered high aspect wings are a natural for handling large amounts of engine torque, and the more important, P factor, incurred in climbing attitudes.

Contrary to many non-sailplane enthusiast's beliefs, sailplanes are not fragile craft. Gliders are subject to extreme aerodynamic forces, the brutal launching stresses of hi-starts and winches, wind shear forces in thermal areas and high G forces pulling out of descending dives. This same basically strong construction will handle the high stresses incurred in violent stunt maneuvers. A powered glider's construction, however, must be beefed up to handle a slightly higher wing loading caused by the addition of an engine and more flight controls in the craft.

Gliders are light weight aircraft, though lightness is in no way sacrificed to make them smash resistant. The concept of the Desperado, follows this same basic design philosophy. Aircraft design is probably the greatest compromise game in existence, but why throw in a negative factor such as crash-proof? All means should be taken in a design to insure controlability in all flight attitudes and speeds. When this important factor is compromised by 34 appreciable weight additions, the chance of a mishap becomes much greater. In short, airplanes should be designed and flown with crash prevention foremost. Brick out-houses were not meant to fly anyway!

Due to its high aspect ratio wing and comparatively long tail moment, the Desperado flies very gracefully under power, as well as having the traditional smoothness of a soarer when the engine shuts down. The maneuvers are large, and re- quire plenty of sky. With the 100 in wingspan, slow axial rolls, are dramatic beauty!

The Desperado was not designed for either Pattern or Sailplane competition flying; however, on certain occasions it could be used for either, depending on the competition and the weather conditions existing. Powered touch-and-goes require a smooth runway and precise approach attitude. Even with the single wheel set-up, this is not as difficult as it might seem. The Desperado flies very smoothly and is not subject to abrupt heading changes caused by wind gusts or otherwise unstable air.

Spot landings can be difficult with sailplane because of its long flat glide slope. Flaps or spoilers are used to great advantage here. Each method has its own advantage, with the optimum being an aircraft equipped with both. With ease of construction, simplicity and light weight in mind, a flaperon system is used on the Desperado.

Flaperons are the manipulation of the same control surface to serve as both flaps and ailerons. This double duty, is accomplished by making both ailerons droop simultaneously to serve as flaps, yet while they are in the lowered or drooped position, they are able to rotate independently for aileron function. This seemingly difficult duty is carried out very simply, by installing the aileron linkage and servo in the conventional manner, as on most planes with strip ailerons alone. However, in this case, the aileron servo is mounted on a sliding tray. This tray is pushed rearward by a pushrod from the flap servo, which is rigidly mounted. When the aileron servo is pushed rearward, both strip flaperons are drooped, yet they are still able to operate independently by the aileron servo in its aft position. This method produces an airplane with flaps, with hardly more building effort than ailerons alone, yet it is a very effective control in flight.

The Desperado is amply powered by a Ross .60 twin. This engine, with its twin cylinder heads and polished exhaust stacks protruding from the cowling, gives the nose of the ship a very important suggestion, and with good reason. The engine runs extremely smoothly, due to its opposed firing twin cylinders and precise balancing. Since both cylinders fire simultaneously, most of the vibration cancels itself out. A feature such as this in an R/C engine is extremely important, because of its kindness to the vibration-sensitive electronic gear aboard the plane. I am sure all R/C manufacturers will agree; that vibration is the most detrimental factor in radio system failures. Vibration is also very harmful to the airplanes control surface linkages and even to the basic structure of the plane. Features such as this, tend to reinforce my crash prevention philosophy, instead of the negative crash damage prevention. A truly crash-proof airplane would not fly anyway!

The five channels of radio used in the Desperado's controls are supplied by MRC's new Mark 5 radio unit. This moderately priced quality system provided outstanding ground range on pre-flight radio checks prior to the ship's first test September1974 flight. A small, but appreciated feature is their nylon servo tray, with its snap-type servo mounting method. This refinement holds the servos securely, but allows just enough float to absorb servo damaging engine vibration. Another step forward toward crash prevention! The flaps are operated from the toggle switch on the Mark 5's transmitter. This all or nothing method flap actuator wouldn't be desirable on a full size airplane, but it works fine on our model plane application. Applying flaps on remotely controlled mod- els is an entirely different game than ap- plying them on a full scale airplane, where fractions of seconds aren't that important. I am sure those modelers who fly both will agree with this.

For a large airplane, the Desperado transports quite easily, due to its three wing, take-apart feature. With the longest wing section being only four feet in length, it can be conveniently transported in small cars. The lack of a landing gear also makes the fuselage easier to tuck away.

If the idea of boring holes in the sky with a Sailplane doesn't necessarily appeal to you, then a smaller engine can be used..." 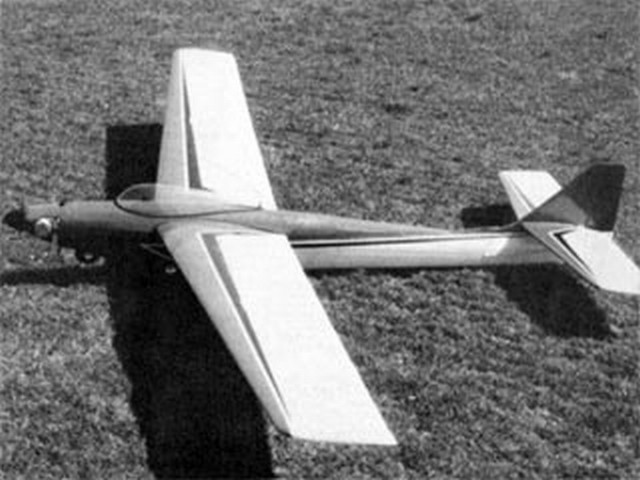