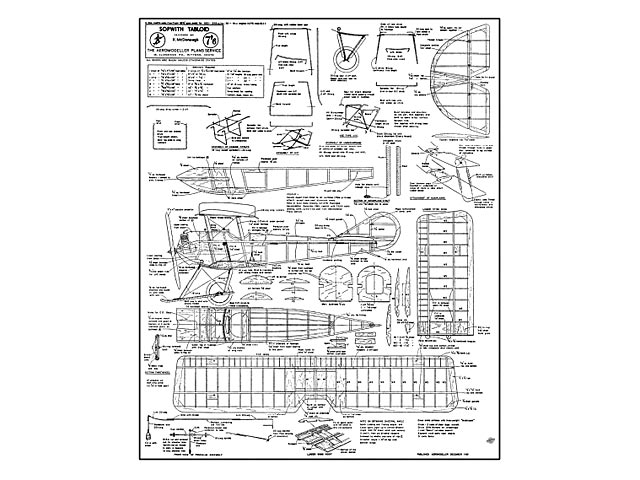 SIMPLICITY WAS THE hallmark of Sopwith aeroplanes, and many of them, including the diminutive Tabloid, make ideal subjects for flying scale. Ken McDonough's model prototype has completed several seasons of successful flying and has a performance comparable to a sports model. Flying speed is realistically low and the glide particularly flat due to the corrective action of the pendulum operated elevators. The degree of realism of the model in flight can be judged by the very true-to-scale appearance in photographs on these pages.

Construction will present no difficulties to the average modeller. Really hard balsa should be used for the longerons and wing spars. Build the fuselage side frames on the plan and cement the hardwood engine bearers securely. Join sides together with formers A and B, then fit 1/8 in ply mounting plate to bearers with four counter-sunk screws. Cement well before screwing mounting plate to bearers. The fuselage may now be completed. Before covering top of fuselage with 1/16 in sheet, bind and cement centre section struts in place, and fit wing runners and spreaders which should be bound with fuse wire and well soldered. Install pendulum assembly before adding bottom crosspieces of fuselage at tail.

Tailplane and elevators should now be constructed. Elevators being temporarily hinged and connected to pendulum gear to ensure free movement. Pendulum should be vertical with neutral elevators. The pendulum weight should be just sufficient to give a positive elevator movement. The fin is constructed on 1/8 in diameter dowel which plugs into a rolled paper tube cemented in front of fuselage sternpost.

Upper wings are first constructed as a single unit and paper tubes cemented in centre section to tube wing dowels. When upper wings are complete they are separated along the centre line and are connected by the dowels. The prototype model was designed to break down into a number of small components for ease of transport. A model will last much longer if carefully stored away after flying, but it is left to the individual builder to decide how much of his model can be dismantled for transport purposes. Upper wings are attached with rubber bands to wing runners. Lower wings are in two halves plugging into fuselage with hardwood tongues and slots in fuselage. Really hard balsa must be used for spars. Lower wings are connected to upper wings with elastic cord passing through built up hollow interplane struts.

Particular care should be taken when soldering the undercarriage. Hardwood skids are bound and cemented to under-carriage with silk tape. The wheels are built up on 1/16 in ply discs, hard balsa being used for the tyres. The model flies very well with an ED Baby but a DC Dart or Cox .020 may be substituted if extra power is desired. 1/8 in ply wedges should be fitted under the lugs to give the downthrust angle shown on the plan. At least five degrees of right sidethrust should also be incorporated.

Upper cowling is of balsa block, clipping to fuselage with 4, 20 SWG spring clips. Give at least three coats of cellulose or fuel proofer to all exposed wood parts near engine. Two holes cut in lower cowling (see cutaway drawing) will assist in dismounting engine and in drawing off surplus fuel waste.

Cover entire airframe with heavy-weight tissue and give two coats of clear dope followed by one of coloured. The correct finish for the Tabloid is a faded primrose shade to represent the natural fabric finish. Do not water spray the tail surfaces and dilute dope with 50 percent thinners for these components. The elevators should be finally sewn to tailplane with linen thread after covering. Leave covering of under-side of fuselage until last in order to make final adjustments to pendulum control. Note the positive incidence on the tailplane. The elevators should also have a slight positive angle which can be adjusted by moving the pendulum forward in its bearers..." 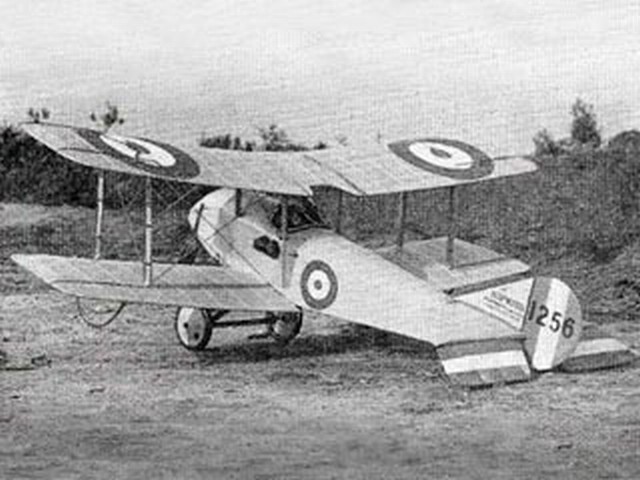