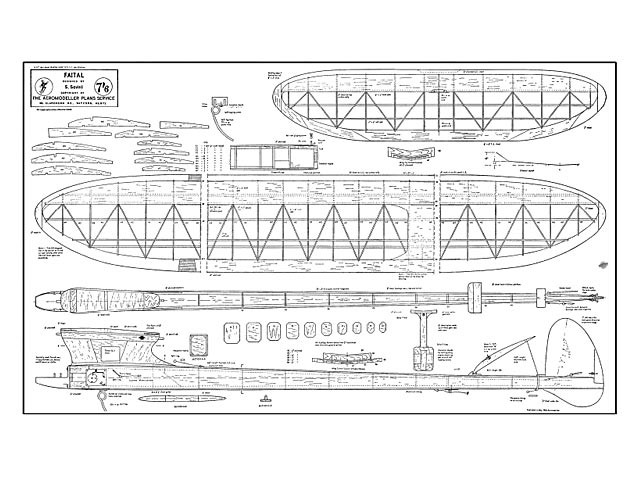 Quote: "FAITAL V. Winner of many power contests in Austria, Italy and Great Britain as designed and flown by Sergio (Joe) Savini.

This FAI Power model design began as a flat bottom airfoil, straight tapered tips, Oliver Tiger 2.5 diesel powered job with a long nose, 3 deg decalage and was tissue covered. Its best effort was a third at the Woodford Rally.

The pull out wasn't very good, so the next design had an autorudder incoroporated and a shorter nose. Duration was less satisfactory. This one was built in Italy and came second at the Coppa Sperandini. To improve duration, an under-cambered section was used on the next one which was the first of the 'Faital' series. The new section was a blend of NACA 6409 and the flat bottomed airfoil used previously which, incidentally, was that of Alan Carter's 'Incinerator'.

Faital I and II each had flat bottom section tail-planes. These rated sixth place in the 1963 team trials, but as one was lost owing to dethermaliser timer failure the next model incorporated a double DT arrangement as shown in the plan.

When investigating the reason for persistent stalling in Faital II, it was found that the left hand centre panel had acquired 1/4 in wash-in which of course increased the overall decalage (difference between wing and tail angles). The reason for the 1/32 in wash-out in the left centre panel is therefore to prevent that panel becoming washed-in with ageing.

Other modifications in Faital II were: elliptical wing tips and tailplane. These seemed to improve consistency in the climb pattern. Engine timers were modified Autoknips. Decalage now stood at 2 deg with 4.5 deg positive for the wings and 2.5 deg positive at the tailplane. Just as many others did, Joe found that when changing from diesels to glow motors the climb pattern would change drastically. The old 9 x 4 in props seemed to have much more effect on the pylon, and this, coupled with the extra power given by latest glow engines made the Faital go up too straight on the climb, and pull out badly. On Faital III a larger fin was used, the fin itself was lowered (ie some of it became an underfin) also side thrust and down thrust were used.

When trimming this model Joe discovered something interesting for that time. By using a 3-1/2 in pitch prop (as opposed to 4 in pitch). He was operating an rpm range where the torque curve was rapidly falling off and of course less torque gave the right turn he wanted without need of side and downthrust. (Combination of which incidentally gave the plane a very shallow climb for the first 2-3 seconds.) In consequence he retrimmed all his models as follows: The prop was 7-3/4 x 3-1/2 in and rigging: 2.5 deg on wings 0.5 for the tail (this was achieved by packing wing and tailplane trailing edges), down and sidethrust were eliminated.

After retrimming, Faital III became more docile and would take more kindly to hand launching. The angle of climb was constant from the launch. Next improvement (Faital 1V) was the use of an undercambered tailplane which became the cure for all the stalling problems. The modification which definitely improved duration was the different tailplane position relative to wing downwash. Whereas before, the top of the fuselage was straight, on Faital IV, on 'Mark V' it is tapered. This positions the taiplane about 1/2 in lower, and directly on the engine thrust line.

Faital V saw the introduction of an upright mounted engine and use of a cast alloy pan: all stress points which had appeared in previous models were put right. It was trimmed within five flights at the NWA Easter meeting, flown in the contest, the next Sunday and won at Wells (Austria) two weeks later.

Although a little right sidethrust was used at the beginning, this was later eliminated in fact when the engine was changed from a G20 (and 8 x 31) to a G15 and 7,1 x 31 wooden prop, Joe then used a small amount of left thrust. Only special technique needed for trimming is: very slight right rudder and no human errors. Joe always maintains that he is the biggest handicap for an otherwise good model. The only reason he says he has got away with it in the past is that Faital has a very good reserve stability and always manages to get high. None of the Faital series has ever crashed. Joe still has in fact, Faitals II and III. Anybody can build it, the only secret of success is flying, and more flying to gain familiarity.

Construction. Cut fuselage sides and add bottom longerons. Formers, pylon, tank and bearers are glued to the left side, then the right side (with bearers in place), is positioned; add all the fuselage formers, D/T and autorudder wires. The fin is then pushed between the sides and glued; now add top and bot-tom sheeting. Care should be taken when glueing the fin that there is no offset incorporated. The fuselage is silk covered (4 coats of dope) and sprayed with thinned Humbrol enamel using Pukka dope thinners..." 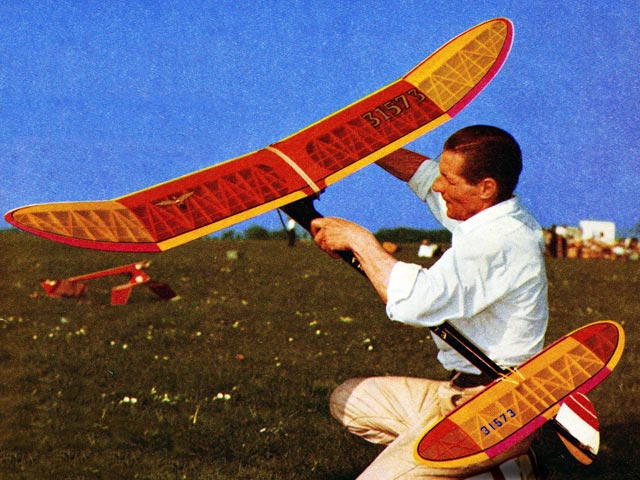