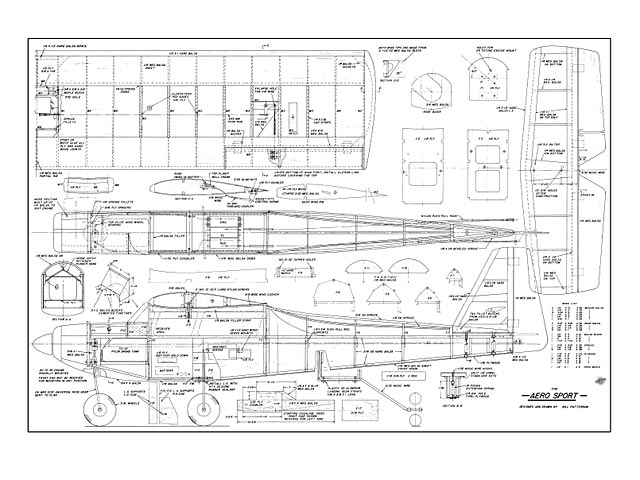 Quote: "The AeroSport is an easily controllable and fun-to-fly plane of simple construction with realistic appearance. It was designed as a sport ship, which could also be used as a trainer. My touch-and-goes and right-hand pattern approaches were in need of some improving, and a plane which would fly at a moderate speed would be ideal to use for this type of practice.

With these qualifications in mind, I decided on a high-wing design for its forgiving stability, and ailerons for ease in making turns. It is generally thought that high-wing models are not very responsive to ailerons; however, this problem is not evident in this design.

The AeroSport is flown as most RC ships, using only the ailerons for turns. In comparison to the rudder/elevator trainers, its smooth flight characteristics give a valid reason for the beginner to consider having his first ship equipped with ailerons. The original has been flown many times by beginners and experts, and all like the way it flies. It's a real fun airplane, and should make an ideal building project.

The AeroSport offers many advantages for one's first RC model. Its large sine makes visibility something that can work in your favor - beginners tend to fly too high and far away, as a rule. The engine displacement used (45-60) can save the newcomer $20 to 40 over trainers requiring smaller power plants. Our kit and plan market is disproportionately favorable to the larger engines, so investing in the inevitable, right off the bat, makes sense. And let's not forget that big airplanes handle wind gusts well. Penetration and smooth flying can do a lot to ease the tensions of those first flights. You'll get more practice, while lighter craft are grounded by the wind.

The clean exterior lines of this ship have been accomplished by replacing the customary rubber band wing hold-down with two 10-32 nylon screws. Although they may appear to be undersized, they are strong enough for all in-the-air maneuvers, but will shear off during those sudden stops.

Another unique design feature is a spring-mounted tail section, which will flex enough on bad landings to keep from breaking off. This system use two internal extension springs obtainable by mail order, at $.50 each, from: The Penn Valley Hobby Center, 837 W Main Street, Lansdale, Pa. 19446.

A newly designed plane generally offers a few surprises on its first flight. This one certainly did. Gross pilot error resulted in insufficient flying speed, and it stalled out shortly after takeoff. While not a planned test, it proved that the nylon wing screws would shear off. Other than a bent landing gear and some mud in the carburetor, everything was okay. It was successfully flown the same day. During the many flights that have followed, it has been looped, rolled, spun, and flown inverted; and, it handles beautifully.

The original model weighs 5-1/2 lb and uses the older GD 47 Heath Kit proportional system. It has a 62 in span; fuse is 47-1/2 in overall. Power is a muffled Enya 45 which is plenty of power to get you off the ground. The model can be flown easily at half throttle..." 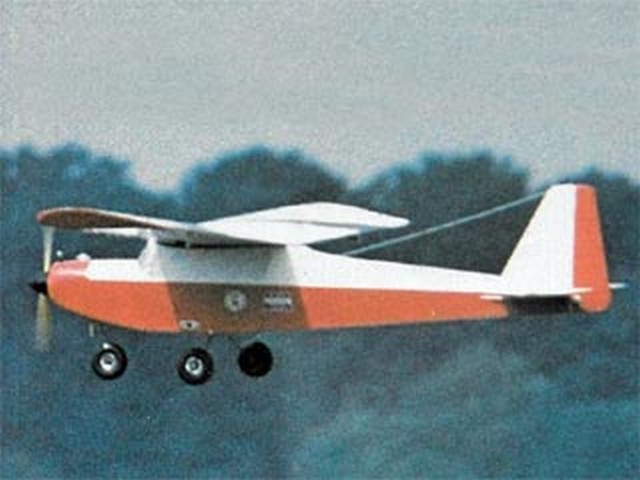