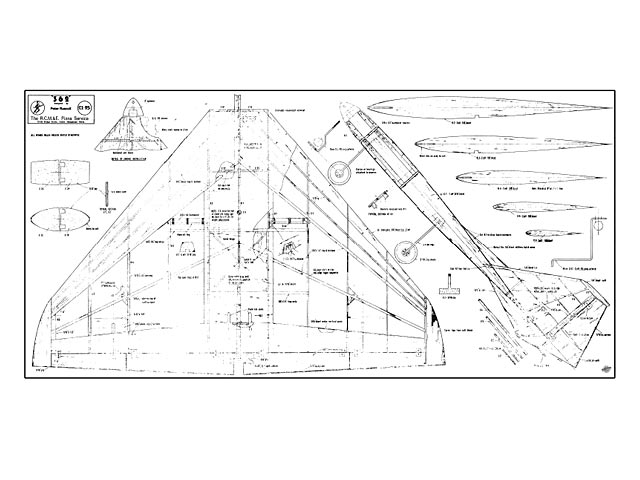 Quote: "Here's a 40-1/2 in span, compact one-piece model that won't break the bank to build. It suits 3.5 - 5cc motors, will fly on any 2-4 function radio and will reward you with a good aerobatic performance. 362 by Peter Russell

Background. The story of most deltas currently flying goes back about 14 years. The rule makers of the time, confronted with the problem of working out a set of viable pylon racing rules, decided, in their wisdom, that a 'free-for-all' situation would inevitably result in the evolution of high-powered 'bombs' that would be potentially lethal. Maybe they weren't so stupid. To avoid this, the first pylon race rules limited engines to 2.5 cc (.19 cubic inches in America) and required models to have a wing area of four square feet. This didn't look too bad in print, but when we came to actually build wings of this area, they looked enormous, and early pylon racers were rather bizarre 'pencil bombers' with long, thin bodies and huge wings. Nevertheless, some were quite fast.

Suddenly, however, some bright Herbert (sorry, Herbert, nothing personal, you understand) hit on the idea of bending the four square feet into a more or less equilateral triangle. The resulting aerodyne was much more compact, span about 40 in and length about three-quarters of that, giving an aspect ratio of about 2.5. The thickness of the wing root was enough to enclose the gear, making the fuselage redundant, while the back end of the 'wing' replaced the tail. Sounds like the birth of the blues, doesn't it? In time, the deltas so dominated the pylon scene that they were banned - a fine example of negative thinking!

This writer started on the delta trail by building a near-reproduction of one of the successful American pylon deltas. 'Experts' all seemed to think that a reflexed trailing edge wing section (turned up at the back) was necessary for longitudinal stability. These sections are supposed to reduce or even eliminate the destabilising effect of centre of lift movements due to changing angle of attack, but their queer shape reduces lift and increases drag, rather like a flap going the wrong way. After some flying time with this early model, however, it was obvious that, since the model was just as stable inverted as right way up, the reflex was contributing nothing but drag. Consequently, a second, slightly smaller delta was built, this time with a thinner, symmetrical section and the engine, instead of sticking up like the proverbial sore thumb, was tucked neatly away, on its side, into the root profile.

In its pylon racing configuration, weight was kept down to 38 oz by limiting control to two functions, aileron and elevator, the nose wheel was fixed, and, of course, the Cox TD 15 Special was not fitted with a throttle. In spite of some trepidation about longitudinal stability, the fact that it looked very small - most of us were flying five or six foot R/C models in those days - and the fact that deltas were considered very daring, the first flight was completely satisfactory with no surprises except the speed. It was about twice as fast as anything this pilot had previously flown! At a 1964 race meeting, it was officially timed, average of six runs up and down the then-standard 528 foot pylon course, at 92 mph, and even on plain fuel it would do nearly 80!

Years later, long after the 'four square foot' formula had given place to the now defunct (in UK) Formula One, the 362 was re-configured to a full-house sport model. The nose was modified to take a 'cooking' engine with a throttle, while the nosewheel was made steerable. Experience with the 363 (oz6215), which was virtually a scaled-up 362 for contest aerobatics, had shown that, with the very short moment arm, a big rudder was needed to produce acceptable yaw response for stall turns, spins and to on. For this reason, the re-hashed 362 was given a big rudder located as far back from the CG as reasonably possible. Apart from this, the only other alteration was that the 1 in streamlined nylon racing wheels were replaced by bigger conventional airtraps.

All this put the weight up to about 50 oz., still not heavy for this type of model, and this, with the loss of power due to the engine change, brought the performance down to something like a reasonable 'sport' level, though it is still quite fast, about 65, and the control re-sponses are a good deal more positive than most sport models. It is not a contendet for top acrobatic competition, but it will perform all the manoeuvres in the schedule, and is ideal for practice.

As far as the power is concerned, I consider the 0.S.19 to be minimum power (in practice, the 20 and 25 can be taken to be in the same category) so if you have a more powerful engine of similar size and weight, use it. There is nothing more depressing to fly than an under-powered delta!

Cutting wood. If you are interested in building a 362, consider first if you are ready for it. If you are still flying rudder/elevator, you might find it a handful, so you could say that minimum experience requirement is competence in handling fairly lively trainers with ailerons..." 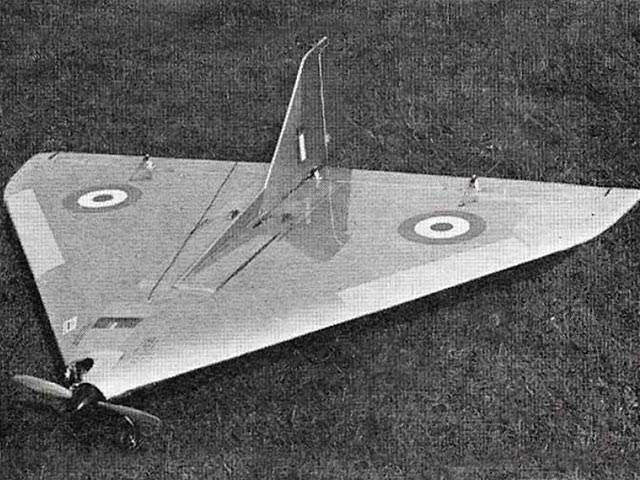